ToolGuyd > Hand Tools > Western Forge, USA Hand Tool Brand and Former Sears Craftsman Supplier, is Closing
If you buy something through our links, ToolGuyd might earn an affiliate commission. 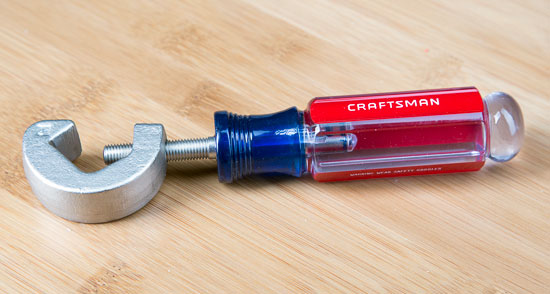 Ryan wrote in about news that Western Forge is closing. Ideal Industries, Western Forge’s parent company, is shuttering the brand and its USA factory. There are news reports that all 164 employees will be laid off.

Western Forge is a USA-based hand tool maker, well-known for making screwdrivers – especially their clear-handled styles – but also pliers and other hand tools, for Sears and their formerly-owned Craftsman tool brand. Western Forge has produced tools for other brands as well. 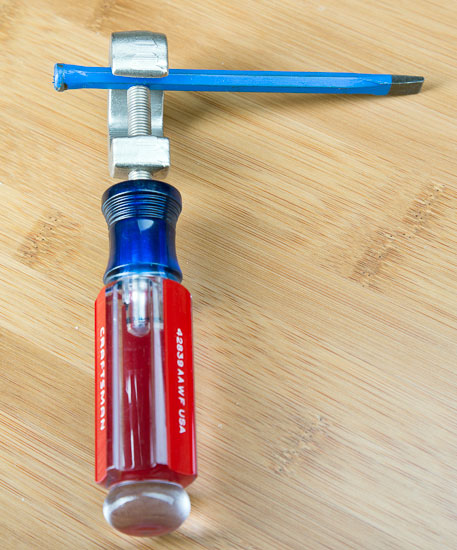 Western Forge-made tools could usually (unofficially) be identified by having a “WF” added to the on-tool model number markings. Shown here is a Craftsman punch and chisel holder with their classic screwdriver handle.

Sears sued Western Forge (their then-supplier for Craftsman tools) back in 2017, around the same time that Sears launched a new line of imported pliers.

About two years ago, Sears also launched a new line screwdrivers, imported like the pliers they replaced Western Forge SKUs with.

With Sears shifting to imported tools over Western Forge’s USA-made SKUs, not to mention the dramatic decrease in Sears’ popularity as a source for tools, Western Forge lost a ton of sales volume. The sale of the Craftsman tool brand to Stanley Black & Decker likely decreasing interest in Sears among tool buyers as well. When is the last time you bought tools at Sears?

the company says the major reason for the closure is the Western Forge facility made tools for other companies as well, including Craftsman brand tools, until Sears sold that division almost four years ago and its manufacturing was moved offshore.

This unfortunately makes sense. Consider how many screwdriver sets, pliers sets, open stock tools, and other tools that Sears would have ordered a couple of years ago under their Craftsman tool brand. Then, it all started changing.

The Western Forge facility made tools for other companies as well, including Craftsman brand tools, until Sears sold that division almost four years ago and its manufacturing was moved offshore. IDEAL and its Western Forge employees tried to streamline operations and offset the loss of the Craftsman volume for years but were not able to offset the loss enough to sustain the plant.

We just couldn’t survive the impact from the Craftsman move.

I have seen – and purchased – USA-made Husky screwdrivers that I believe were made by Western Forge, but let’s be honest here – a couple of product SKUs for Husky and maybe some other brands is nothing compared to the business Western Forge used to do with Sears and the Craftsman brand.

I predicted that Sears’ downfall and the sale of the Craftsman brand would likely have ramification for Sears’ former suppliers, but I was always on the lookout for acquisition news, or new partnerships. I hadn’t expected that former USA-based Craftsman hand tool suppliers would ultimately be forced to close.

Ideal Industries says that their attempts to sell Western Forge’s facility was unsuccessful.

I have always hoped that Walmart might step in and work out deals with some of Sears and Craftsman’s former USA-based tool suppliers. When I was talking with Walmart about their efforts to push into the Pro Tools market, this was often on my mind. Couldn’t they arrange for affordably-priced and decent quality USA-made hand tools of the type that Sears’ Craftsman hand tools used to be known for?

Walmart recently entered into an arrangement with TTI to launch a new and very broad line of exclusive Hart tools and workshop products. Couldn’t there have been some opportunity there to tap some of Sears’ former USA-based Craftsman hand tool suppliers?

But, we also don’t know the state of Western Forge’s factory or production capabilities.

Milwaukee Tool, a TTI brand, acquired Empire Tools several years ago, and has pumped money into expanding and modernizing their capabilities.

It is possible that it wasn’t financially feasible for any companies to purchase and save Western Forge from closure.

Forgive my language, but this stinks. 164 workers are losing their jobs (Ideal Industries says there will be some opportunities for relocation to other Ideal facilities), and a USA-based hand tools maker is closing up shop after 54 years.

One of the inherent risks with OEMs is that users don’t often identify the brand with tools they might be familiar with. I say this because I am now wondering whether there are other brands that might be in trouble or potential trouble in the wake of Sears’ downfall and Craftsman’s sale to Stanley Black & Decker.

It can be said that something similar happened to SPG International and their tool box product lines.

Some tool brands produce tools under their own label as well as for retailers’ private labels, and they have a better chance of recovering from the loss of business related to changes to Sears and Craftsman in recent years. It has been a couple of years now, but I’m increasingly concerned that Western Forge’s closure isn’t the last we’ll hear about.

What else has been happening in the wake of Sears’ downfall?

It seems unfair to play the blaming game without knowing more. Did Western Forge fail to modernize their designs? Did Ideal Industries fail to diversify Western Forge’s business after acquiring the brand in 2010? Were there simply too few opportunities in the market for Western Forge to make up lost sales volume resulting from changes at Sears and Craftsman?

According to a The Gazette’s 2008 article, “Forging Ahead,” Western Forge was at the time “the nation’s largest” screwdriver plant, celebrating the production of their billionth screwdriver. That article is a good read, but also a bit sad in the context of Western Forge’s closure.

Ryan, who sent in the news about Western Forge’s closure, also had a good question:

I’d like to buy a set (or a couple) of screwdrivers made by Western Forge since I think it would be cool to have screwdrivers made a mile from my house. Any idea where I can still get some? I know they made some Husky screwdrivers but I couldn’t find any at Home Depot that said “WF” on them.

Also, Harry Epstein Co is a good source for tools like this – I’d do a search for Craftsman tools. You can always email (or call?) them if you want to double-check on a tool’s sourcing. I can’t guarantee they’ll know for certain, but I’d trust them to be experts on such matters.

You can also find some Sears Craftsman-era screwdrivers at Amazon, but at high mark-ups. They’re advertised as being made in the USA, such as this 17pc set, and they look like the Western Forge-made screwdrivers, but I’d pass on the inflated pricing.

My Western Forge-made tools aren’t top-shelf quality (well, some of them come close), but they were affordable, well-made, and are long-lasting. I didn’t like my Craftsman Professional screwdrivers, but nothing beat the value of their clear hand-handle screwdrivers, nut drivers and accessories.

I’ll say it again – this stinks.

Nuts and Bolts “Thread Checker” is for Sizing Unknown Hardware