ToolGuyd > Power Tools > Jobsite Radios and Speakers > What Do You Listen to in the Workshop?
If you buy something through our links, ToolGuyd might earn an affiliate commission. 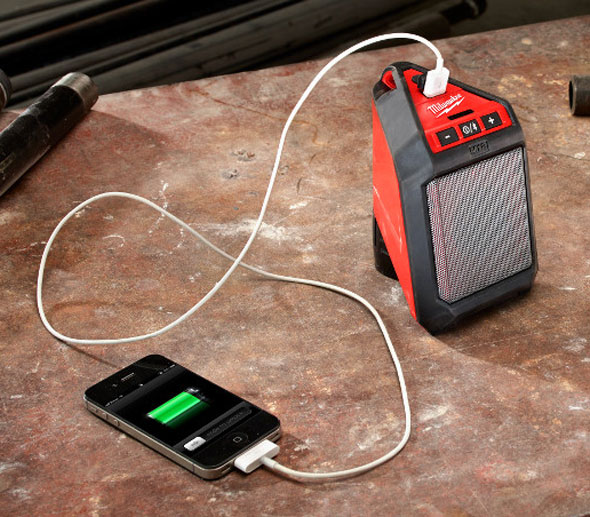 What do you listen to when working on leisurely projects in your workshop or garage?

Headphones? Speakers? (Which ones?)

Just the sounds of your tools doing their thing?

My 12+ year old computer speakers (a ~$60 Creative 2.1 setup) needs to be replaced. I made the mistake of ordering powered bookshelf speakers that are too large for my space. But, they sound crisp, clear, and simply wonderful.

I placed a new order for smaller desktop-sized speakers. Until they arrive, I’m left debating what to do with these quite large powered bookshelf speakers. Do I… return them (the Amazon seller allows for a no-risk trial period), or maybe I can place them in the workshop?

That got me wondering about what you guys listen to in your workshops, both in terms of content (music? podcasts?) and mediums (speakers? headphones? TV?).

When working with loud machinery, hearing protection earphones or earmuffs are pretty much the only option. But when doing assembly tasks, woodworking, layout work, or work with intermittent noise, speakers are more attractive, not to mention more comfortable.

I don’t think I have ever listened to headphones when working with tools. But I do listen to wired speakers in my office workspace, and a jobsite speaker in the garage.

A few years ago, wireless audio was pretty bad. Then it was so-so at best. Now? Nearly all portable speakers, jobsite speakers and a good deal of desktop or powered “computer” speakers have Bluetooth connectivity. And they sound fantastic, too.

Jobsite speakers are good solutions for when you need ruggedness, cordless power, or added features such as battery charging.

But for a workshop? Garage? Basement? Other settings where you can plug in speakers, place them down, and then leave them there? It seems to me that powered desktop or small bookshelf speakers might be better. Plus, dollar for dollar, there’s more value put into sound quality, rather than portable ruggedness or battery-power features.

Even if not the speakers I ordered and are too large for my desk, I think I’ll be adding a pair of bookshelf speakers to the garage workshop.

And in case you’re wondering, the current garage music player is a test sample of Dewalt’s ToughSystem music player, which is probably the best jobsite speaker I’ve heard to date. Bosch’s Power Box is a strong contender. One of these days I’ll need to do a direct comparison.

The Best Cordless Jobsite Radio and Bluetooth Speaker Features, in Your Opinion