ToolGuyd > Hand Tools > Layout & Measuring > What Happens if You Leave a RevMark Marker Uncapped for 4 Days?
If you buy something through our links, ToolGuyd might earn an affiliate commission. 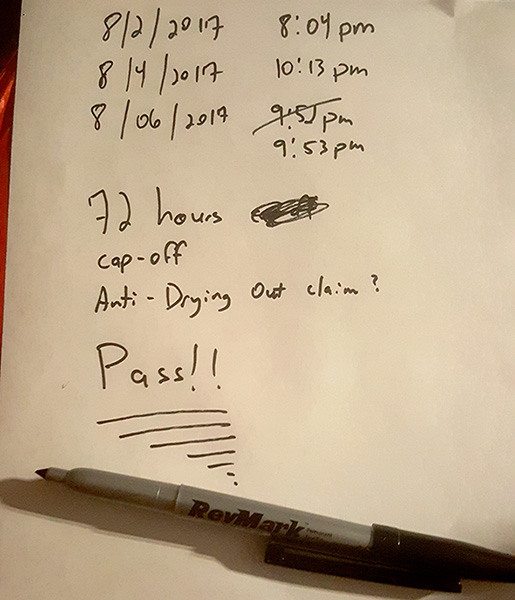 A couple of days ago I posted a first impressions type review of RevMark markers. Readers asked whether RevMark’s 72 hour dryout resistance claims were accurate. That’s easy enough to test, and so I did.

I started off on 8/2/2017, taking a new RevMark marker and writing the day and time on some inkjet paper. I left the marker uncapped at the rear of the garage, near the door.

I had planned to check in on it everyday, but I forgot about it. I checked in on it on the 4th, and it wrote the same as on Day 1.

I remembered about it again last night, the 6th, so I went and gave it a quick test. Some scribbles and a little writing later, and there’s no sign of any drying out.

I’ve had Sharpie markers last for very long times. But a couple of days mostly capped but not sealed was enough to render the fine-tipped end of a still mostly-filled marker unusable.

These RevMark markers are looking even better.

I brought the Sharpie failure on myself, by questioning why someone might need an uncapped marker to not dry out after several days of exposure. Well, it’s because a marker might not be perfectly capped sometimes, after which it doesn’t take much to dry out.

*Thumbs Up* to RevMark, not just for their ink formula that doesn’t dry out easily, but for their modest claims.

I’m calling it quits at nearly 98 hours of the test pen being uncapped. That’s longer than 72 hours, and I bet it could go for quite a bit further.

Keep in mind that environmental conditions, such as temperature, humidity, air circulation, and other factors could affect the dryout time.