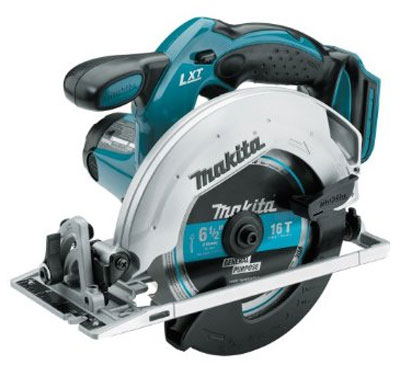 Okay, so I am searching for a new cordless circular saw. I’m not committed to any one brand, and am considering Porter Cable, Hitachi, Dewalt, Makita, and Milwaukee’s product offerings. Up until last night I was very strongly considering Makita, but that has since changed.

So why the sudden change of heart? Because Makita has made it very difficult to make an educated purchase. You see, they offer two 18V LXT cordless circular saws, the BSS610Z, and the BSS611Z. I tried and I tried, but I could not find any clear difference between the two saws other than the two LED lights that only the BSS610Z model has. So that’s the only difference, right?

Wrong. Taking a quick look at the respective parts breakdown diagrams confirmed that the BSS610Z has an LED module that the BSS611Z does not have, and that it also has an additional “stopper” knob. HOWEVER, seeing as how there is a huge price difference between the two tools – $100 street price vs. $150 street price, surely there must be another difference!

Well, there is another difference. It took looking at both tools’ owners manuals to see that the BSS610Z has a blade brake and the BSS611Z does not. You would think that Makita would take more care to mention this feature!

While this is the major issue detracting me from choosing Makita, there is at least one more minor example. When trying to determine which battery and charger was required, I noticed that Makita also fails to differentiate between the DC18RA and DC18SC chargers. Not only that, there is no explanation as to why one charger is required for 1.5 amp-hour 18V batteries and the other for 3.0 Ah batteries. A minute of searching suggests that the DC18SC was replaced by the DC18RA, but it would be better if this were confirmed by Makita on their website.

If I’m going to spend my hard-earned money on a power tool, I want to be able to quickly make an educated decision. Companies that hinder this process by providing inadequate or confusing information will not see my business.

Since Makita’s cordless circular saws are so well regarded, they’ll remain on my short list for now. Even large international companies are entitled to make mistakes from time to time, and there is no indication that the aforementioned confusion was intentional or resulting from a lack of effort. If anything, it looks like a lack of communication between tool experts and marketers, but it’s nevertheless oh so frustrating.