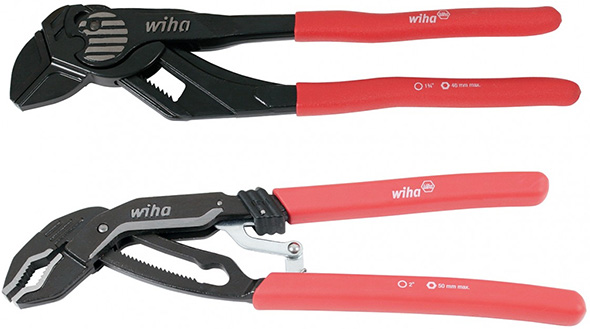 I just received an email about a one-day deal on Wiha’s Pliers Wrench and Auto Pliers. Pliers Wrench? The Knipex Pliers Wrench? No – apparently Wiha came out with something similar and gave it the same name.

In the image above, the Pliers Wrench is on the top, and Auto Pliers on the bottom.

The Pliers Wrench is said to offer button-free fast adjusting, has a smooth face, and can grip work materials up to 1-3/4″ in diameter. It’s 10.5″ long overall.

The 10″ Auto Pliers can automatically adjust to workpieces up to 1.5″ in diameter. All you need to do to squeeze the handle to close the jaws.

According to KC Tool’s listing, the pliers are made in Vietnam.

I must admit, button-free Pliers Wrench operation sounds appealing. But on the other hand, my Knipex Pliers Wrenches have never let me down. They were all pricey, and continue to be pricey, but they’re well built and top-quality tools.

I don’t want to be quick to judge the Wiha Pliers Wrench. At regular price, the Wiha 2-pliers combo isn’t very compelling. At $50, which is how much they’re selling today (9/26/2017) as part of a one-day coupon, you can get the Pliers Wrench and Auto Pliers for around the same as a 10″ Knipex Pliers Wrench.

Those Auto Pliers, though? I’ve seen lots of automatic and self-adjusting pliers, but so far there aren’t any that have earned a permanent spot in my toolbox. These don’t look like they’d be the first.

After a little searching, I found that the Auto Pliers are sold by themselves, but I cannot see to find an individual listing or price for the Pliers Wrench.

If you’ve tried these Wiha pliers before, would you recommend them?