ToolGuyd > Hand Tools > Wiss Straight-Cut Aviation Snips
If you buy something through our links, ToolGuyd might earn an affiliate commission. 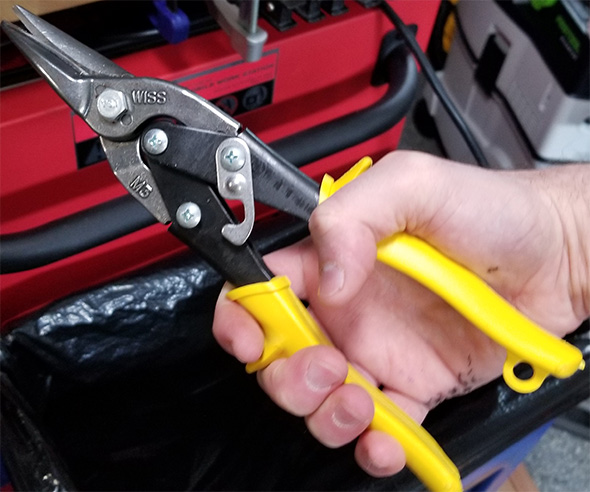 Home Depot sent over a pair of Wiss straight-cut aviation snips for me to try out. (As you might recall, we’re in a paid partnership program with them, where they sent us a selection of tools for review consideration.)

Well, this is awkward – I have yet to touch its jaws to any sheet metal. But it has seen some use so far. I’ve used these Wiss snips to cut nylon zip ties, wire ties, clamshell packaging, and even a small piece of scrap wood that I needed separated.

That last part isn’t true – it didn’t cut the scrap wood; it’s more accurate to say that it broke the wood, as the wood snapped apart along grain lines.

These Wiss snips, and its right- and left-cutting cousins, are regularly promoted at Home Depot as part of their Father’s Day and Holiday season sales. At those prices, and even at their regular prices, they’re great values. 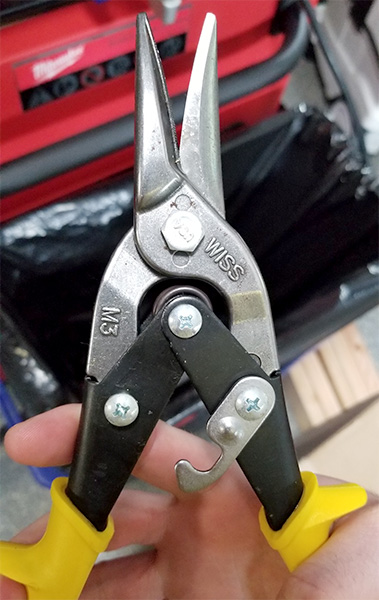 I have used and abused aviation snips over the years, sometimes using them on sheet metal, but mostly using them for tasks that would either ruin good scissors, or require too much muscle power to accomplish.

Wiss M3R snips can handle up to 18 gauge carbon steel.

These snips, like many others, have compound-action jaws, transmitting more power than if they were built with a simpler pivot.

They perform adequately, are nearly as comfortable as aviation snips can get, and they’re affordably priced, especially for a USA-made tool.

Who should buy these? Anyone looking to buy their first straight-cutting aviation snips who want a comfortable USA-made tool that’ll perform without breaking down.

I have used Wiss snips in the past, and they handled sheet metal with ease, although, like this sample, I used it for general purpose use more than anything. That has changed in recent years, as I have taken to using Milwaukee jobsite scissors for general cutting needs.

My only disappointment? I’ve been spoiled by my Midwest snips which have a more premium-feeling grip, but it was also cost 43% more ($20 vs. $14).

I have some aluminum sheeting to cut soon. I’ll be sure to let you know if the work changes my opinion of these snips, but I don’t think they will.

Wiss makes solid-performing snips at decent pricing. These should work well for metalwork, but also for other cutting tasks.

Every holiday season, when I see the Wiss snips display at Home Depot, I do a mental celebratory fist bump, happy that they’re continued to be made here in the USA, and at low pricing.

Thank you Home Depot and Wiss for providing the review sample.