ToolGuyd > Hand Tools > Layout & Measuring > New Woodpeckers Edge Rule for Woodworkers
If you buy something through our links, ToolGuyd might earn an affiliate commission. 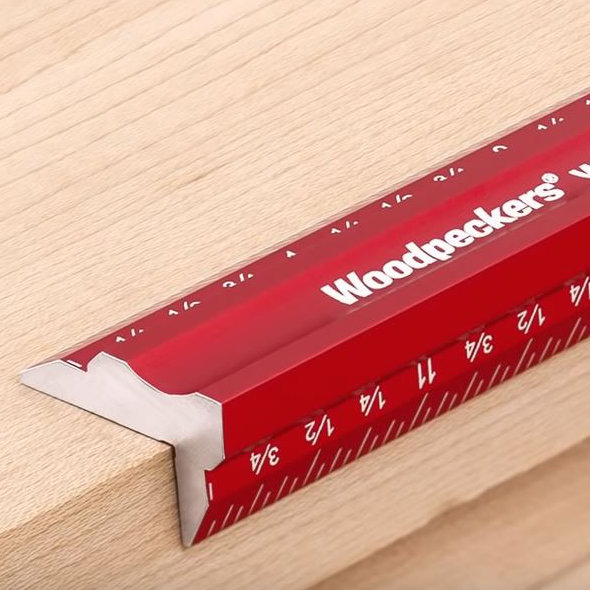 Woodpeckers’ new edge rule is designed to make layout work easier and more precise. By having the ruler aligned with the edge of a board, you can concentrate on your markings, rather than making sure your ruler is parallel to the edge.

The short leg of the edge rule is 3/8″ wide, which lets you make markings on stock as narrow as 7/16″. The 3/8″ inch width also allows you to use the rules as a center finder for an edge of 1″ (3/4″ actual) stock. Using the short leg, if you draw lines from each edge of the board, the center is between the lines (or on the line). 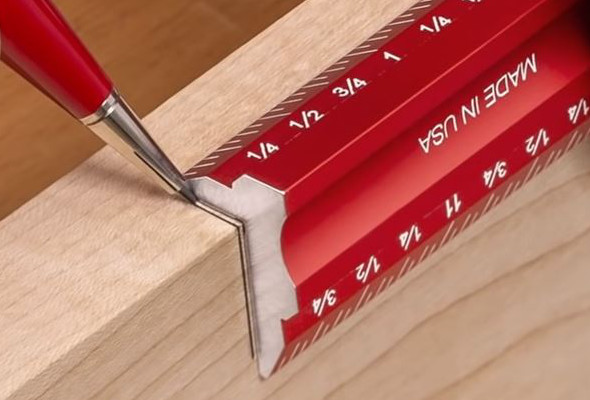 The wrap over design lets you mark the both the edge and face of a board at the same time.

They don’t explicitly say the rules are made from aluminum, but that’s a pretty safe assumption given that it’s the most common material they use to make most of their tools. Plus they mention anodizing the rules to give them their “Woodpeckers Red” color. 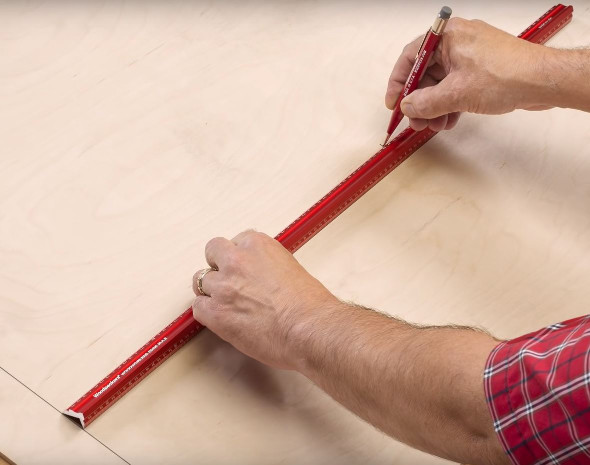 The two legs of the ruler come together at an 89° angle, which helps ensure that the measurement edge is tight against the face and edge of the board. The edges are beveled to put the scale closer to the surface, to minimize parallax error. You can also use the rule on a flat surface.

The laser engraved scale on the Imperial rules is graduated in 1/32″ increments and has markings at every 1/4″.  Woodpeckers guarantees scale to be accurate to ±0.003″ at any point along the scale.

There are 10 different edge rule purchasing options. Right now Woodpeckers is offering the rules at a lower introductory price, but they don’t say when the sale prices will end. Below I’ve listed all the rules and have marked the sale prices in bold and put the regular prices are in parenthesis.

Woodpeckers says they rules should ship somewhere from late November and early December 2018. It appears that for now you can only get these new rules directly though the Woodpeckers site.

I had just about written off posting about new Woodpeckers tools until I saw the email introducing the new edge ruler. It seems that as of late, they have been making more specialized tools at prohibitive prices.

This new ruler intrigues me a bit, as not only is it “reasonably” priced for a precision ruler, but it’s an interesting concept. I know there have been times when I’m using a hook rule or a tape measure hooked to the end of a board and I’m not holding it parallel to the edge. It may not make a huge difference, but it’s just one more place to introduce error.

Is it worth me picking up one or two to test? Or is it just another gimmick?