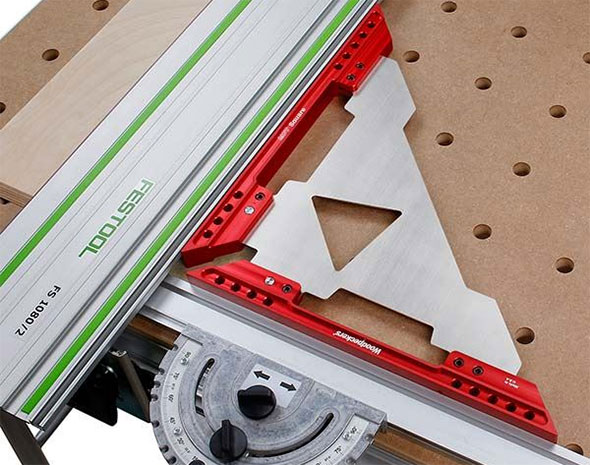 Woodpeckers has come out with another One Time Tool – an MFT Square. It’s designed to be perfect for squaring up Festool’s MFT multi-function tables, which are often used with Festool power tools and track saws to make straight, perpendicular, and miter cuts on sheet goods.

Although designed as an MFT guide rail and fence square-up solution, the MFT Square can also be used to calibrate and square up other equipment, such as miter and table saw blades and fences. 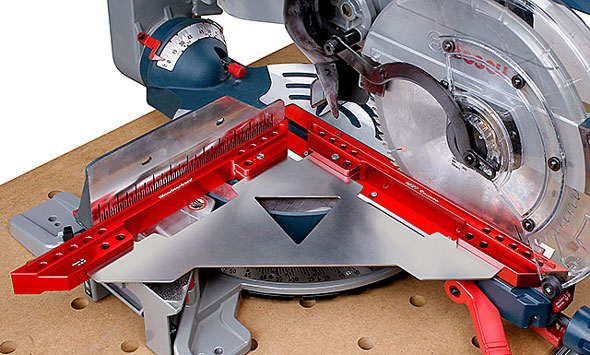 The Woodpeckers MFQ Square is made from 3 main parts – a 3/32″ stainless steel plate that’s machined to size, and two 1-1/8″ thick legs made from anodized aircraft-grade aluminum. The legs are attached to the steel plate with socket head screws, meaning it can be recalibrated if it’s ever knocked out of squareness. 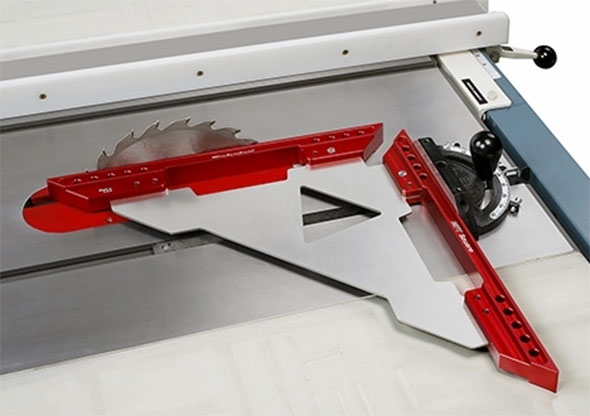 Both legs are 17″ long, making this a monstrously sized square. This size, and the ample thickness, are what make the MFT Square great for squaring up miter saws, table saws, and yes MFT guide rails and fences, where thinner tools can cause serious frustration.

The square weighs in at 4.8 pounds. It’ll eat your speed, rafter, and combination squares for breakfast.

COO: Made in USA

As this is a Woodpeckers “One Time Tool,” you order first, and then they will manufacture the squares later on when there’s machining time. If you don’t order by the deadline, you’re out of luck. There’s a signup sheet where you could request retired products be brought back to production, but that doesn’t happen often.

Woodpeckers ships the square with a mounting bracket that attaches to the side of Festool’s MFT tables.

$270 is a HUGE price to pay for a square. But, keep in mind that Woodpeckers makes top-quality tools (in the USA), and this square obviously requires a lot of machining steps. The final square weighs nearly 5 pounds, and Woodpeckers says that the legs start off weighing 5 pounds, with the context suggesting that it’s 5 pounds per leg. It’s no wonder it takes so long for Woodpeckers to fit One Time Tools into their regular production schedule!

Do you know of any other square with reference edges that are 17″ long and 1-1/8″ thick? I sure don’t, which makes the MFT Square even more desirable, at least in my opinion.

As has happened in the past, I know I’ll regret it if I pass on this One Time Tool, but nearly $300 is very hard to swallow. Maybe I’ll make due with my ordinary and downright puny-in-comparison squares until Woodpeckers comes out with a smaller version for half the price.

The only real way I could justify buying an MFT Square is if someone lets me buy a prototype in time to review it before the Feb 16th deadline. Hint Hint. I’ve got my credit card ready!