ToolGuyd > Hand Tools > Layout & Measuring > Woodpeckers 4″ Saddle T-Square Review
If you buy something through our links, ToolGuyd might earn an affiliate commission. 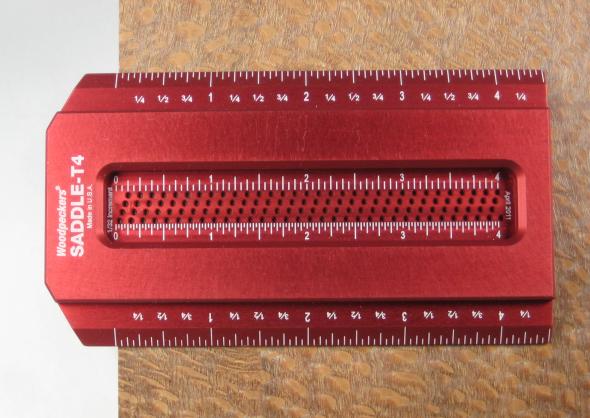 After we posted that Woodpeckers is bringing back their Saddle T-Square as a one-time tool again, Carbide Processors contacted Stuart to see if ToolGuyd wanted one to review.

Evidently, last time this Woodpeckers One-Time Tool was available, a customer canceled their order, and so our friends at Carbide Processes had it sitting around since then. Since this was made during the first run, there *might* be differences between what you see here and what you see in the second production run (but probably not).

Stuart’s Note: In response to the preview post, some commenters compared the Woodpeckers saddle T-square to Incra’s T-Rule ($20+ via Amazon). I own one – purchased from Woodpeckers incidentally – and while has its purposes, it’s not anywhere near Woodpeckers’ saddle T-square in terms of durability. A small dent or ding to the Increa and it might not rest flat on a worksurface ever again. It also cannot be used in the same way to mark 2 faces joined at an edge.

Marking with the Saddle T-Square

One of the main jobs of a saddle square is to be able to mark both the face and the side of a board at the same time. This also allows you to easily transfer a line from one side to another. If your board is square and you have an accurate tool, you should be able to transfer a line all the way around a board and have it meet up with the original line.

This isn’t just a practice exercise – it’s handy in the real world. For example, if you are making a tenon, a saddle square provides  an easy way to mark the shoulder.

It may not look like it in the above picture, but the lines do meet up. It looks like the line on side four bends, actually it does. The bottom of the square has a slight chamfer to remove the sharp edge and my pencil followed it. If you ignore that little jog, the lines up pretty well aligned. 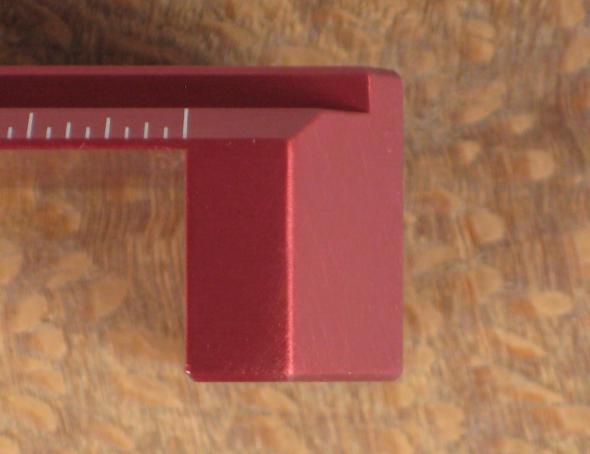 If you really want to trace a line around a board accurately, use a knife instead of a pencil. You can put the blade of the knife in the previous line and butt the Saddle T-Square up to the knife to transfer lines even more accurately. 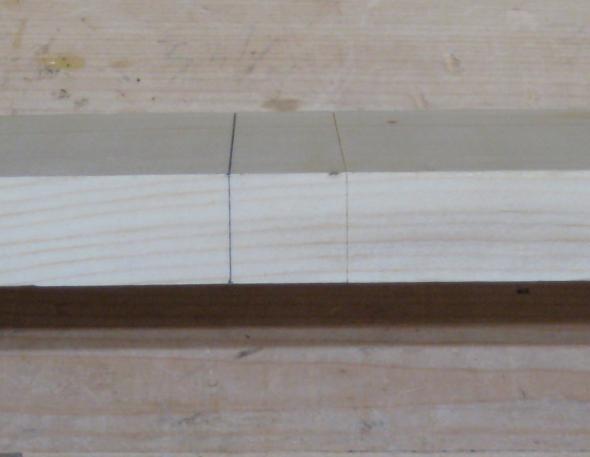 If you can’t see the knife line well enough, you could go over it it with a thin pencil point. 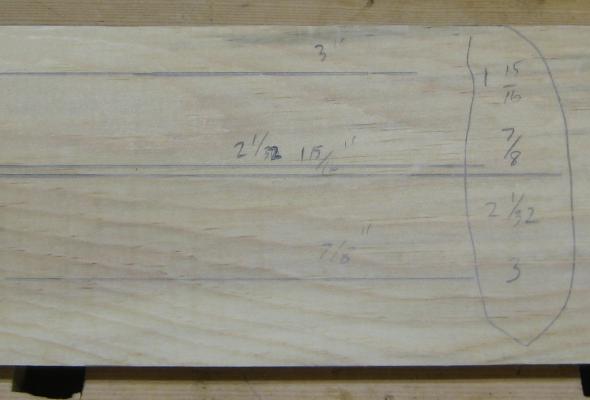 Laying out an Window Opening

I needed to make a door for my Little Library project, and rather than build something from scratch I just cleaned up the waste piece from cutting out the door opening. 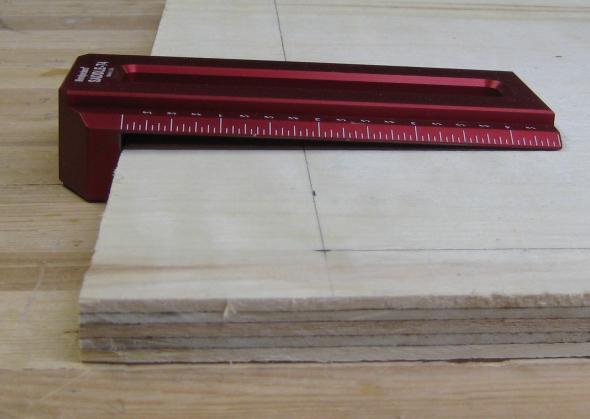 Since I was using 1/2″ material the Saddle T-Square needed a little help to lay flat. I just raised the material up of the bench with some scrap and it sat flat on the material. 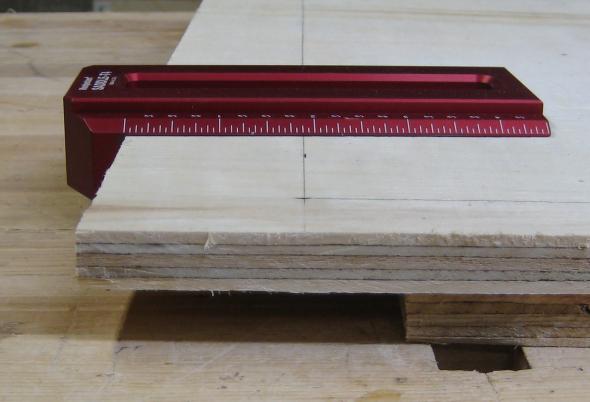 I started by laying out where the 11×14″ piece of polycarbonate would sit in the door. After a little math, I used the Saddle T-Square to mark where the “glass” would sit. 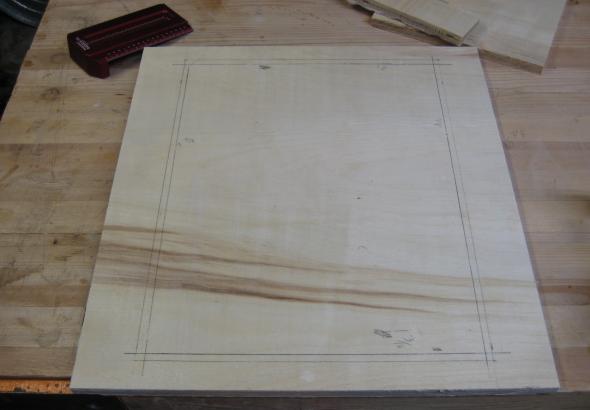 I couldn’t just cut a hole the same size as the “glass”, I needed a rabbet on the inside of the door to hold it. So I used the saddle square to mark off a 1/4″ offset all around the inside of that square. This is where’d actually make the cuts. 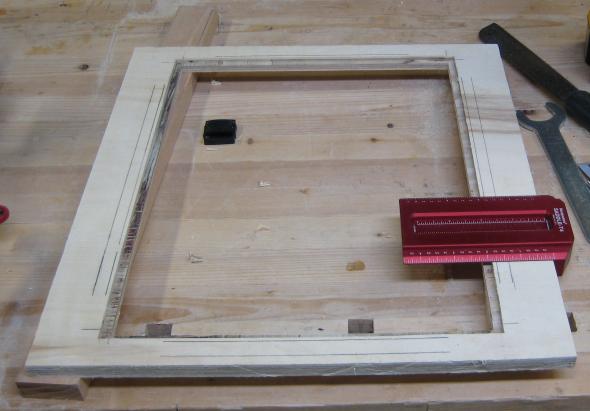 Once I cut the rabbet, I used the saddle square to mark the location of the recessed holes for the glass clips. I marked a line for the center of the bit and went back with a tape measure to position the holes. I also marked a line to show the outside of the holes, just to make sure they weren’t going to interfere with the operation of the door. 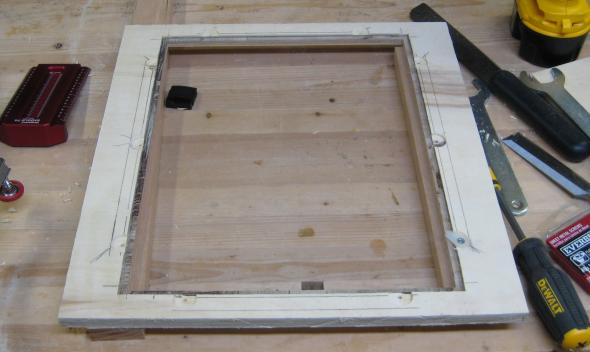 I had to balance spending enough time with the Saddle T-Square to get a feel for it, and getting this post out as soon as possible before the ordering deadline passes. So I didn’t get nearly as much time to play with this Woodpeckers One-Time Tool as I would have wanted to before reviewing it. Here are my thoughts so far anyway:

Like the Delve Square, at first the 4″ Saddle T-Square doesn’t seem like it would be large enough for most tasks in the workshop, but four inches still gives you the ability to mark an 8″ wide board. I’ve been using a speed square more and more and I really like that size. I think for me the sweet spot would have been a 6″ version, but this size tool is still perfectly useful.

Woodpeckers is offering these saddle squares in 4″, 6″, 8″, and 12″ sizes, and corresponding metric sizes as well. This 4″ saddle square is the smallest model.

I’m not sure why the designers of this tool didn’t make some of the dimensions an even number, like 1/4″ for the thickness of the blade, or 1/2″ for the thickness of the overhang. If they did, then you could perhaps get even more use out of each square as a partial set of setup bars. I suspect maybe one reason is that this tool was designed before some of the more recent multi-use tools.

I learned that the parallel marking feature of this tool needs to have really smooth and straight pieces of wood. After using the precision drilled holes for marking plywood, I found the Saddle T-Square did not slide easily and I kept breaking off the tip of my pencil.

On the whole, I do like the tool. It is well built, hefty, and very precise. Like most of Woodpeckers tools, it’s a beauty and a joy to hold and use. Because of all the chamfers I suspect that the Saddle T-Square would survive a drop (not gonna do it) unscathed better than some of their other tools.

The 4″ Saddle T-Square I tested is priced at $50 at both Carbide Processors and Woodpeckers, plus shipping.

I’m not going to repeat listing all the prices of the other options, if you want to see them just go one of the sites below. Again, keep in mind that the last day for ordering is December 21st, 2015. Shipping ETA is May 2016.

P.S. Register for Carbide Processors’s newsletter and get a $10 coupon code to go towards your first order. Here’s more info.

Here is Woodpeckers’ promo video if you want to see more usage examples:

Thank you to Carbide Processors for providing this review sample unconditionally.