I was looking on your page to try to find some router recommendations. It looks like it has been a while since you have covered routers. I’m looking for a decent one and a table to use with it. It’s for hobby and around the house use so while something like the Festool would be nice, I can’t justify spending that much for what I would use it for. Any recommendations or suggestions?

One thing I have yet to see is a winning router and router table combination set. Most of the ones I’ve seen come with low-powered routers and cheap router tables with too-small surfaces and few features. Decent benchtop router tables typically start at $100. 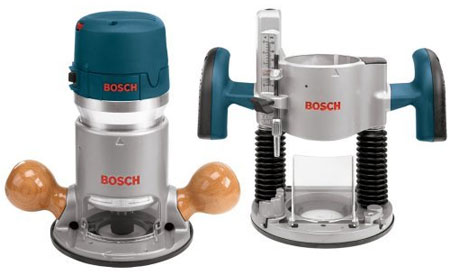 If I were in the market for a new router, my pick would be the Bosch 1617EVSPK kit ($200-215 via Amazon). This kit comes with one motor spindle and both plunge and fixed bases. You can attach the fixed base to a router table and use the plunge router hand-held. It’s a nice 2-in-1 combo kit.

I own a slightly modified version of the Bosch 1617 kit that was sold under Craftsman branding, and don’t regret my purchase one bit. A minor grumble is that I can no longer find sub-bases that are sure to fit, but if anything that’s a good reason as to why one should stick with industry-standard brands in the future.

Bosch came out with new routers a few years back, but the 1617 remains a strong favorite among woodworkers. But it is a mature design that Bosch updated upon for a reason. I can’t tell the reason though, as the 1617 is as good as I’ve seen in its class (2-1/4 HP).

For lower budgets, I would probably recommend the Porter Cable 690 ($129 via Amazon), which has a fixed base that works well with router tables. Adapters and guide bushings should be very readily available. You should be aware that this Porter Cable is a single-speed router, and as such it’s not suitable for use with larger bits. Stepping up to a more powerful and variable speed model will cost about as much as with the Bosch kit.

I don’t have experience with Dewalt or Hitachi full-size routers, but haven’t heard many bad things about them either.

The Hitachi M12VC is a variable-speed 2-1/4 HP fixed-base router, and it’s often priced below $120 (it’s currently $105 via Amazon). There’s also a Hitachi kit with plunge and fixed bases ($170 via Amazon), and this would be my preferred budget pick.