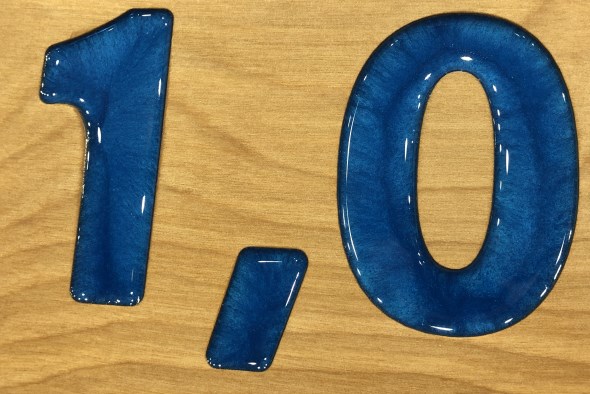 If you are on Instagram, you might have seen some of the awesome tables and other projects where colored epoxy is used to fill gaps and crevices in the wood. And if not, a Google image search for river tables should give you a good sense of how it’s used.

Shown above is my first foray into using epoxy in a woodworking project, where I used it to inlay letters in a custom plaque.

Epoxy can be used for decorative purposes, or it could be functional (such as patching a knot), or both. 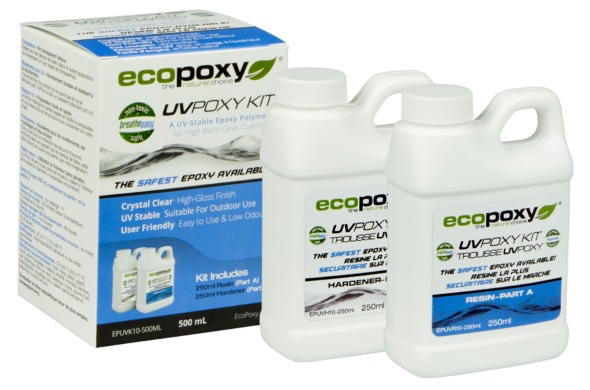 EcoPoxy is a two-part epoxy resin that can be used to create stunning additions or enhancements to your woodworking projects.

UVPoxy is one of the products in their line, and is meant for thin coats, up to 1/4″ in thickness. It’s often used to provide a clear coat to finish pieces. UVPoxy starts to harden after 20 minutes and is fully cured in 24 hours. 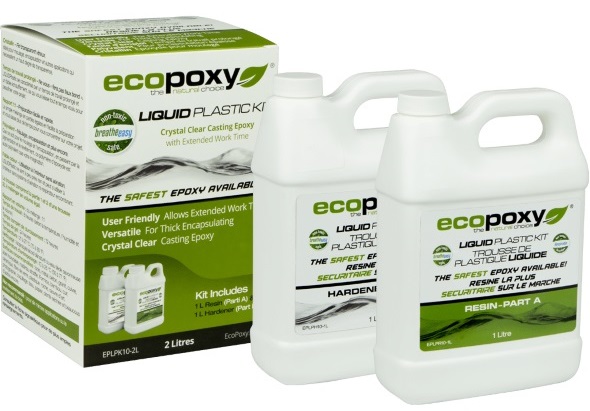 EcoPoxy’s Liquid Plastic is for thicker applications, allowing you to fill a deep void between two pieces of wood. It begins to set in 1-2 hours and takes 3 days to fully cure. 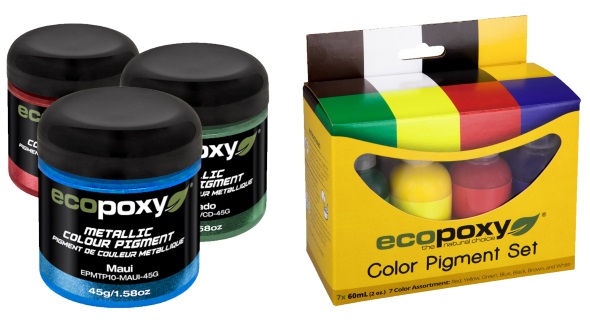 The full magic of EcoPoxy is fully unleashed when it’s paired with color or metallic color pigment, allowing you to let your imagination run wild with different looks.

I’ve looked at epoxy-woodworking projects with much admiration, and have wanted to give it a try for a while. I was recently asked to make a plaque to celebrate a milestone, which gave me the perfect opportunity to try it out.

I purchased a liter of UVPoxy and some metallic blue pigment. Using my Shapeoko CNC router, I engraved the letters into a piece of birch plywood, with each letter measuring 3″ tall and 0.2″ deep. I measured out equal parts of the UVPoxy and mixed it for 5 minutes before adding a teaspoon of blue pigment. Then, using a squeeze bottle, I filled in the lettering. The last step is to run a heat gun or blow torch over the epoxy to burst the bubbles.

I used about 0.5 ounce of epoxy for each letter, which comes out to be about $1 a letter, which isn’t exactly cheap. However, a 3″ brass or wrought iron letter of this size is six times more expensive at Amazon, and I think the look of the epoxy is far more unique and interesting. That said, I dread to think how much the dining room table projects I have seen would cost! Some of those bigger projects must use several hundred dollars of epoxy!

Paint is always another option, but would give the lettering a flatter and matte look.

I’m thrilled with the end result and will definitely use it for some more projects. The metallic pigment in particular adds an amazing depth to the lettering.