ToolGuyd > Safety > New Work Glove Recommendations (2017 Edition)
If you buy something through our links, ToolGuyd might earn an affiliate commission. 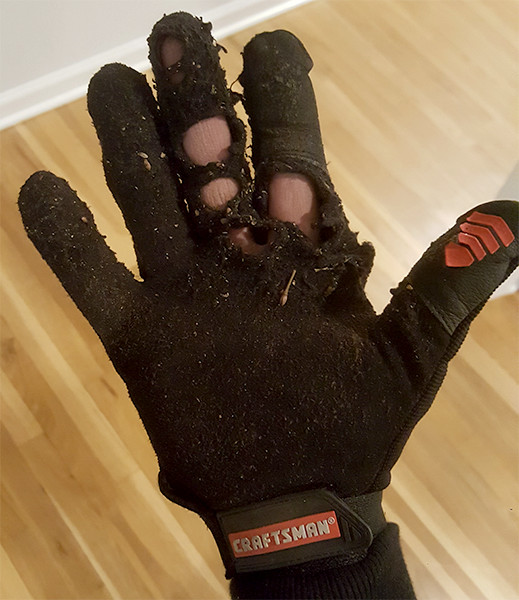 I had a pair of lightly used Craftsman work gloves in my car. Maybe they were mechanic’s gloves? Regardless, they were general purpose work gloves that I rarely used.

When something would come up and I didn’t want to have to search for some work gloves, this is the pair I’d reach for, since I always knew where they were.

I had some garden stuff to take care of last month –  trimming some overgrown thick-branched bushes and removing 3 infant trees that had taken root in some very unfavorable places.

Prior to that one 2-hour session with some branches and a smooth wood-handled shovel, these gloves were a little pilled up, but otherwise completely intact. But the work I did that morning had DESTROYED these gloves.

Well, it looks like the new gloves Milwaukee sent over for testing will see some use as my new go-to general purpose gloves. I have a pair or two of Mechanix gloves hanging around, but I’m still angry that they changed the design of my favorite tool gloves.

It’s been 3 years since we asked about your work glove recommendations. As we’ve seen, manufacturers can change things up. So…

If you were to buy some new work gloves today, which would you go for?

The last work gloves I bought were Custom Leathercraft Handyman Flex Grip gloves, currently $13 at Amazon. I don’t use them often, but they’ve been holding up reasonably well. I’ve misplaced them, which is why I went for the Craftsman gloves in the car.

Oh, and I don’t really blame the Craftsman gloves for wearing out like that in one session. I bought them several years ago, and they have seen some use. They’re also not at all meant for the type of work I put them through in that outdoors cleanup session.

It was the tugging on the infant tree stems that did the most damage. The roots on those suckers run long, deep, and anchor themselves under large rocks. So the process went: dig, tug, dig more, tug, dig more, find rock, pry rock, lift rock, dig more, tug, REPEAT until I could get as many large roots as possible.

Looking at Sears’ site, these were mechanics gloves, not general utility gloves. So.. *shrug*?