ToolGuyd > Shop Essentials > Size Matters. How Big Should a Workbench Be?
If you buy something through our links, ToolGuyd might earn an affiliate commission. 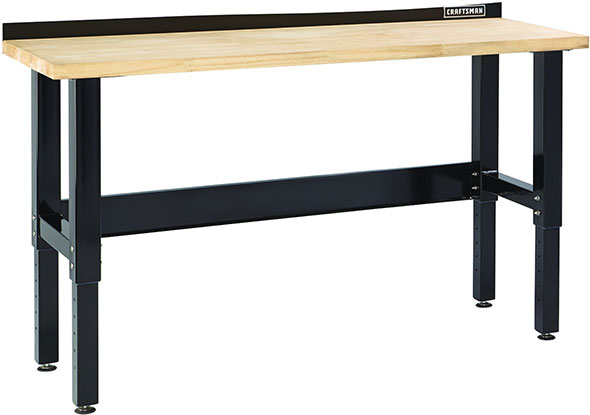 In the Fall, I started testing out Craftsman’s new premium workbench, which I thought was fantastic at the time. It’s still a fantastic workbench that’s solid, sturdy, and a pleasure to use.

When I first set it up, I put a bunch of my Festool Sortainers underneath. I left an Akro Mils storage bin cabinet and Durham sliding drawers cabinet on the floor. 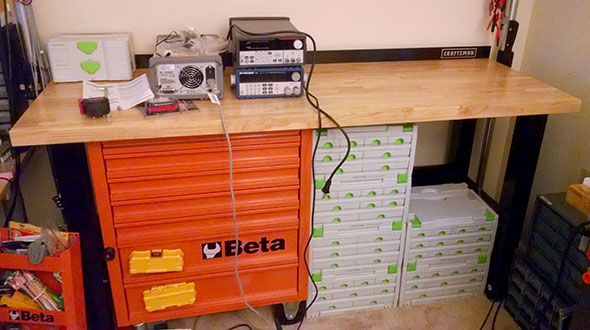 A few weeks later, I moved all of my Sortainers to the top of the bench. That wasn’t a very good idea, as there wasn’t much depth left to do any actual work.

The Akro Mils and Durham cabinets remained on the floor, and were then moved to another bench, and now I’m putting them away until I can reclaim enough benchtop space where they can be effectively used.

The Craftsman workbench is fantastic for a 24″ deep bench. Given its size and strength, I sought to make this my primary do-everything bench. After all, I rearranged a lot and moved a bunch of useful cabinets and stands out of the way in order to fit this in for evaluation.

I figured that I could always move my Sortainers out of the way when I need more benchtop space. That was a good idea, but filled Sortainers aren’t exactly lightweight, and my Akro Mils and Durham cabinets – if I had left them on the benchtop – are even less portable.

Plus, with Sortainers having flat tops, you can imagine what happened – I dumped random stuff on top of them. Safety goggles, earmuffs, gloves, battery packs, and so forth.

This past weekend I moved the Sortainers around again. I’m not terribly pleased that I had to put a bunch of them on the floor under the workbench, but that’ll have to do for a few more months or until we find a nice expanded space to move into.

That brings me to the main point. Size matters. How big should a workbench be?

For a primary workbench, the Craftsman bench convinced me that 6′ is a good size. It’s long enough to support large or multiple smaller projects, and short enough that it might not dominate a workspace. It leaves room for additional equipment, workbenches, and assembly stations or whatnot.

But I’m finding that I wish the bench was deeper. Maybe wider is the right word? But you know what I mean. I think that maybe a 30″ bench would much better suit my preferences.

This is of course an argument in favor of building one’s own workbench. Going the DIY route allows for complete customization. There are arguments as to why you should considering buying a workbench – such as the lovely Craftsman one shown and discussed here – but turn-key vs. DIY is a discussion for another time.

When we move to a larger space, I think the first thing I will do is seek out a 72″ x 30″ workbench. Or maybe I’ll make my own again.

It seems that 36″ might be a tad too long. Actually, after measuring my arm’s reach to be between 24″ and 30″ depending on how I position my shoulder, a 36″ deep workbench seems a little ridiculous – unless it’s meant to be double-sided.

Yes… 72″ x 30″ is definitely where it’s at. Maybe 48″ x 30″ for smaller spaces. This would allow the bench to accommodate 12″ deep parts bins and cabinets and still provide for at least ~18″ of usable benchtop depth.

Now as for height… I still haven’t found my preference. Good thing that more and more commercial workbenches and workbench legs have adjustable heights. All of my workbenches, except for one that I just raised by adding bolt-on feet to, are about 36″ to 37″ tall.

The ideal workbench height allows me to work on something benchtop-level with elbows slightly angled downwards. I don’t have to crouch, tippy toe, or lean forward too much. 36″ is pretty standard for kitchen counters, and so it makes sense that it works well for workbenches.

What are your ideal or recommended workbench dimensions?

What Hand Cleaners and Accessories Do You Use?