ToolGuyd > Editorial > Workshop Cleanup: There’s a Fine Line Between “Saving” Useful Stuff and Accumulation
If you buy something through our links, ToolGuyd might earn an affiliate commission. 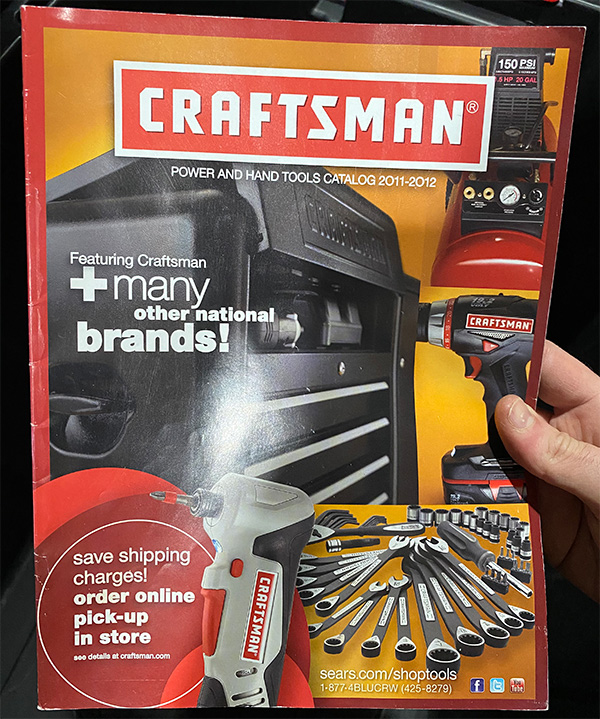 I always liked to think I was saving things for future use and reference. Catalogs, info cards, small parts, spare pieces, and so forth. They would all come in handy. Right?

A few years ago I pared down the number of Craftsman tool catalogs I had been keeping, although I would have saved more of the older ones had I known the catalogs would eventually stop coming. I was selective, and that was a good measure. 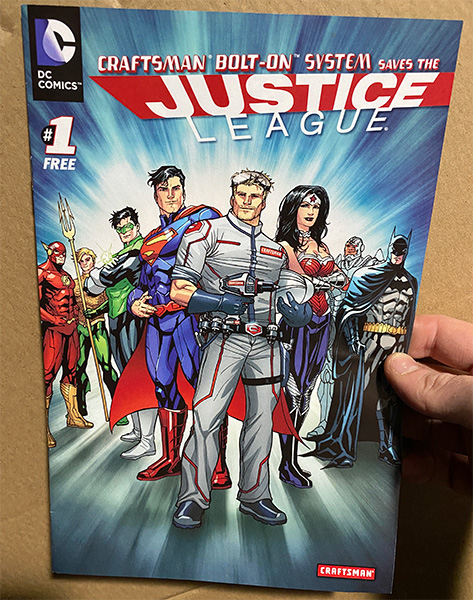 Do you remember the time that the Craftsman tool-wielding Technician saved the DC Justice League? 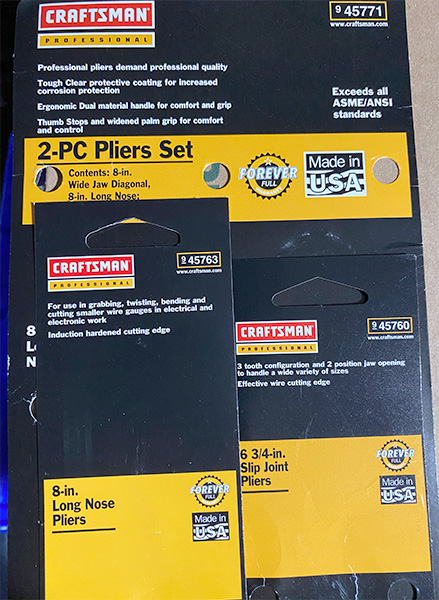 Ooh, the packaging cards from some of my Sears-era Craftsman Professional USA-made hand tools. Gotta keep those. I’ll need those info cards for when I post about them, just in case they contain some info, specs, or part numbers I can’t find on Sears’ website. Right? 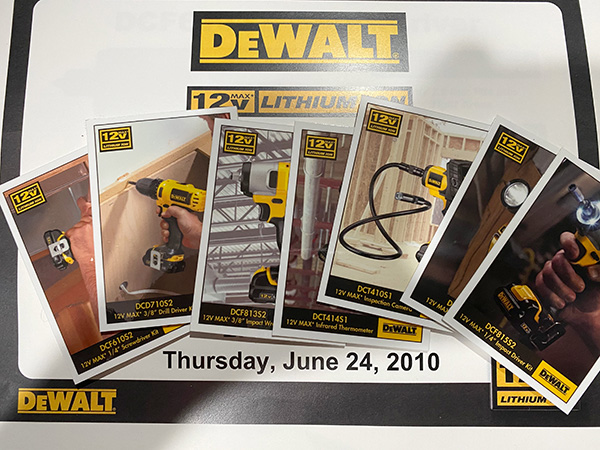 My first media event was to Dewalt’s 12V Max cordless power tools launch back in 2010, held at Black & Decker University in Baltimore. They prepared a tidy and professional-looking booklet with details on all of the new tools, plus trading cards for each tool. I think it’s okay to finally recycle the booklet, but I’m holding onto the trading cards. 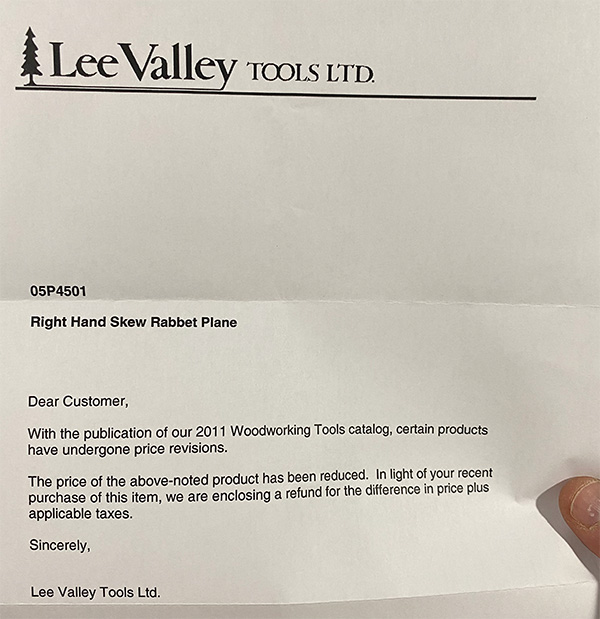 Here’s a letter from Lee Valley Tools from 9 years ago. They lowered the price of a tool I had recently purchased, and they wrote to me that they were giving me a refund for the price difference! Gotta keep that letter in case I want to remember the gesture or post about it someday! 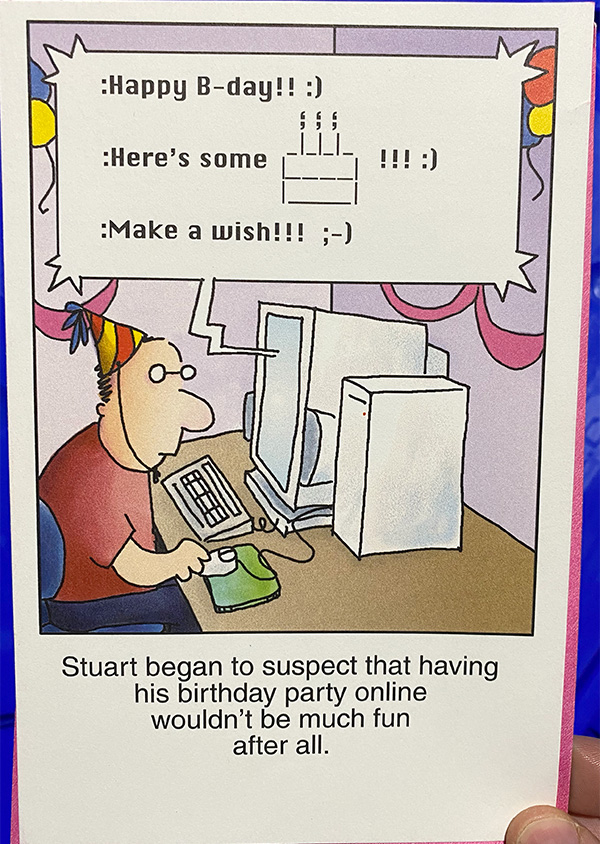 I dug up a birthday card from 20 years ago, and it made me chuckle when I found it.

Can you tell that I have a hard time of letting things go? 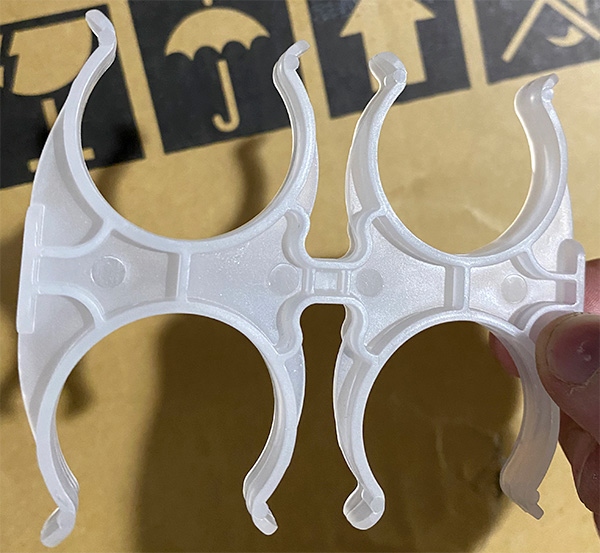 Here’s one of maybe 6 plastic clip thingies I finally discarded, and it’s part of the packaging for small baby formula bottles. I’m not going to show you any more than this, as it’s too embarrassing, but this also seems like a good example of the random stuff I accumulated over time.

It’s only a couple of years old, and I remember why I kept it – it’s a sturdy clip that could possibly be turned into a tool or bit holder with some appropriately-sized PVC pipe, or something to that effect.

I finally started throwing things out – not everything, but lots of things I shouldn’t have kept.

I wasn’t one to collect baby food jars (which I know is perfect for small parts storage), but there is so much other stuff. Hex keys that came with equipment, rubber feet, metal washers, springs, clips, lanyards, and so much other stuff like it. I have belt clips to tools I donated ages ago. Extra pieces of pick and pluck foam. A plastic tube with old duct tape wrapped around it for compact tool box carry. Pocket screwdrivers. A drawstring safety glasses pouch, despite needing over-the-glasses goggles instead of regular safety glasses. A discolored strap and gasket from safety goggles that I removed after the lens went bad.

Unused contact lens cases. I haven’t worn contacts in 20 years, except for trying them again before I got married. Contact lens cases can be used for small screws, right?

I’ve reached a breaking point where too much is too much.

We moved a few years ago, and I went through a couple of massive clean-outs and clear-outs since then, but it wasn’t enough.

I’ve been going through everything, creating a hard line between “I need this” and “it’s gotta go.”

Next, I’ll go through a second-order cleanup as I organize the tools and supplies I wish to keep. Do I really need x-number of adjustable wrenches?

A couple of extra files? That’s not a problem. Duplicate hammers, wrenches, screwdrivers? It can add up.

I tend to hold onto things. “But I can use that later!” “But I might need that information!”

I have seen a lot of photos of others’ garages and workshops over the years, and it seems a lot of people let things spiral out of control, just as I have. But while “mine is a unique situation” might be a good reason, I let it become an excuse for letting things get so far.

A lawn mower showed up back when we were living in an apartment. When OSHA’s new silica rules went into effect, 3 or 4 dust collector vacs showed up out of the blue, almost all at once.

Keeping things for sentimental value is one thing, although I’m doing my fair share of culling with those kinds of items as well.

There is some useful information on the old retail cards. Some of the small parts and thingamajigs might come in handy. But you know what? None of that will ever be useful if 1) there’s so much I can’t find what I need when I need it, and 2) there’s so much that it hinders other needs. Where’s the value in “I could maybe use that” if it impedes my work, personal or otherwise?

So yeah, I have seen others’ garages and workshops over the years, and on a scale of 1 to 10 with 1 being “perfectly neat and tidy” and 10 being “horrendously unusable,” mine would rank maybe a 7, so maybe a little worse than average. My working space is usable, and while my storage space isn’t well-managed, things could be worse. But, it could and should be a lot better.

Why don’t I just build a shop or rent an industrial space like some other tool reviewers or YouTubers? Well, that takes money, and not just a one-time purchase, but a committment over time, and I’m just not ready for that yet.

What am I supposed to do with a lawn mower that shows up unexpectedly in the first week of November?!

And before anyone suggests it, it’s against ToolGuyd policy to sell or trade any samples, they must be donated or given away.

You know, I never quite unpacked my tools, supplies, and equipment from when we moved, not fully – I accommodated, adjusted, and compensated.

I recently installed some new wall shelves. I moved a wall cabinet to a new space. It has made a world of difference, but it’s not enough.

I have a lot more work to do, and things would be easier if I had blank slates, but that’s simply not possible.

The old tool cards are being recycled. Parts I can’t use are going in the trash. If it’s not destined for a place in a drawer, on a shelf, in a tool box, in a cabinet, or in a tote, it has to go.

I have straight edge clamps that I haven’t used since I bought my track saw, and even before that they didn’t work all that well with smaller tools such as jig saws. Why keep them around – for eventual review or editorial coverage? If I didn’t get to it by now, what are the odds I’ll prioritize it in the next 6 months to a year?

I’ve been on this mission before, but this time it’s different.

I am allowing myself to keep a set amount of overflow, for materials, fasteners, parts, and odds and ends that I won’t be able to properly sort. But the big problem hasn’t been the overflow, but the fact that there was so much of it and in 20 different tote boxes, with most only half-filled since my last big round of giveaways and donations a little over  a year ago.

I’d love to be able to say “things would be so much better if I had a bigger workshop.” But the truth of the matter is that I was able to get a lot of personal project work done in the spare bedroom in our apartment. Bad habits set in with our second apartment, and got worse with time.

Don’t be like me. Clean your workshop before it becomes unusable. Remove items that hinder your space, even though they “might someday be useful.”

Accumulation is the enemy.

One day those plastic mini baby formula bottle clips could very well come in handy. But you know what? I’ll have the shop space to fabricate an alternate working solution.

There are some other items I need to part with, starting with a shop vacuum I never really liked, but I was shocked at just how much workshop-related accumulation there was. All the small stuff adds up.

I can come up with plenty of explanations and reasons, but it really just comes down to bad habits. I’ve been aware of those bad habits, but now it’s finally time to break them and correct course.

Are you guilty of similar workshop accumulation practices?