ToolGuyd > Editorial > Workshop Hacks – What Everyday Items do You Use in Different Ways?
If you buy something through our links, ToolGuyd might earn an affiliate commission. 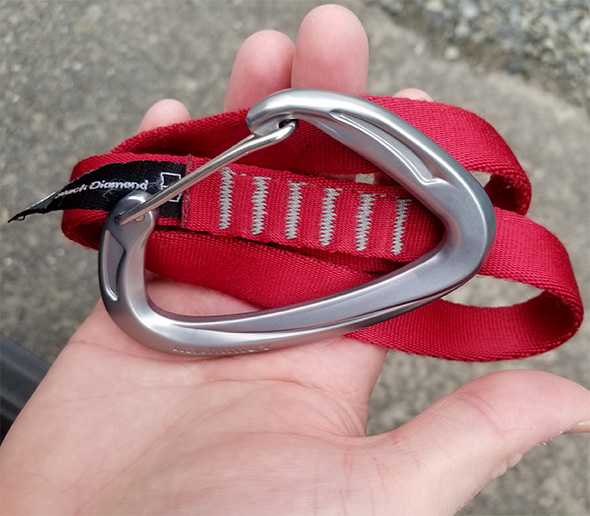 Shown here is something I use at least 5 days a week – a spring-gate carabiner (Mammut) and a nylon sling (Black Diamond).

A few months ago I talked about a different carabiner, but this one’s a little larger.

Every morning, I gather the kids’ lunch boxes and water bottles, clip them together, and haul it out to the car. They’re preschoolers now, and at some point soon they’ll be responsible for their own gear. We’re often crunched for time, so I grab everything and go. The carabiner and strap allow me to carry a couple of things while also being able to hold onto two little hands.

I’ve used the carabiner + nylon strap to o lash things to their stroller, back when we still needed it. Stroller accessories are expensive. Climbing equipment isn’t exactly cheap, but the combo shown above was $7 for the carabiner, and $4 for the runner. Stroller clips cost around the same, some even more, but they’re unitaskers that you can’t use for anything else. When the combo is no longer needed for lunchboxes and water bottles, it can still be used for travelling, at the beach, or even for hoses or cords.

The carabiner and runner also served workshop needs too, mostly for cinching things up and out of the way, but also for supporting loads when lifting certain equipment or moving things around.

I’ve even used it to support a dust collector vacuum hose from above, so that it wouldn’t drag over my work. I think that’s my favorite use so far, and will likely add an eye screw to the ceiling so I can do the same the next time I have a similar-sized project.

I didn’t really intend to find all kinds of uses for nylon runners, which are basically super strong sewn-together loops of webbing material. I saw them at the store, and the price was just low enough to allow me to explore their potential.

Carrying lunch boxes, water bottles, and on some days nap maps is not what these things are made for. But, neither are commercial food storage containers designed for workshop use. We use bathroom trays for sorting Legos, disposable cups for mixing small amounts of epoxy or glue, and reusable plastic food storage containers for workshop storage. Cotton swabs and toothpicks have all kinds of workshop applications. Kids’ spill-free painting cups are great for holding certain workshop fluids.

Tools are misused or improvised for all kinds of things, slotted screwdrivers most of all. Other things can be misused or improvised as tools or workshop implements. I once had a roommate that used a butter knife as a screwdriver and pry bar for some kind of car console repair or installation. (I know because it was my butter knife that was unintentionally bent in all kinds of ways.)

Most of my improvised uses are pretty bland, unfortunately, and so I’m hoping that you guys have some other crazy-useful “hacks,” misuses, or improvised uses to share! Things like… using a playing card as shims.