ToolGuyd > Power Tools > Cordless > Worx Axis Transforms from Reciprocating Saw to Jig Saw
If you buy something through our links, ToolGuyd might earn an affiliate commission. 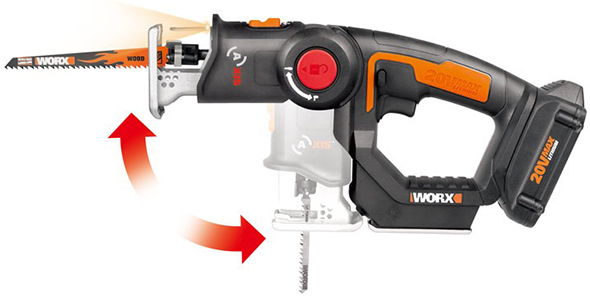 The Worx Axis is a new saw that converts from reciprocating saw to jig saw and back again, with the push of a button and swing of the articulating arm.

The Axis saw is cordless, powered by a removable 20V Max battery pack. It’s relatively light, weighing in at only 4.2 lbs. It cuts at 3000 strokes-per-minute, with a 3/4″ stroke length. The chuck can accept both T-shank jigsaw blades and standard reciprocating saw blades.

An orange switch on top of the saw (in recip mode) or on the front (in jigsaw mode) lets you change the cutting action from reciprocating to orbital. The trigger is only on or off, not variable speed, and has a lock off button. 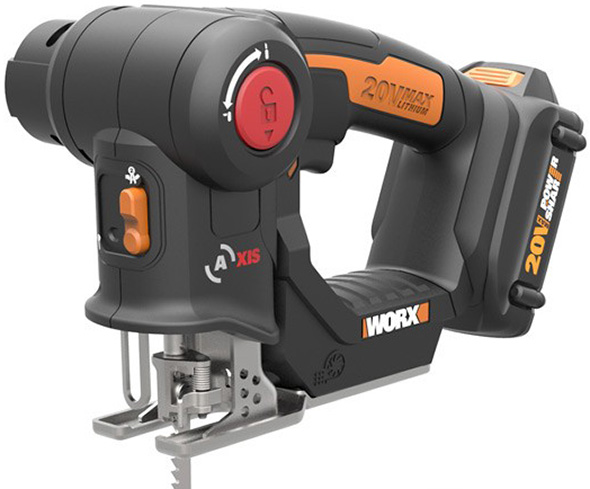 To prevent the motors and gears from getting out of alignment or slipping, they put the motor on the side, which makes the tool look a wider than you’d expect. But this also means the Worx Axis looks like a reciprocating saw in one position, and a normal jig saw in the other.

When using the Axis as a jig saw, the articulating arm is fixed in the downward position. Worx recommends 4″ jig saw blades, and for most materials it has a 2 inch cutting capacity. The Axis is said to be capable of cutting steel plate up to 5/32″ thick.

The tool has a built in blower for removing dust and debris from your cut line, and an LED work light which shines in front of the blade to help you see what you are cutting.

In reciprocating saw mode, the LED will shine on top of the blade, and since the dust blower is on the base and not the articulating arm, it might not help you much.

While in Reciprocating saw mode, Worx recommends a maximum cut of 4″ for wood, 5″ for PVC, and 3″ for steel pipe.

The Axis ships with the tool itself, a 1.5Ah battery pack, a 5-hour charger, a wood-cutting reciprocating saw blade, and jig saw blades for cutting wood, metal, and sheet metal.

Interestingly, Worx recommends that you remove the battery pack before you change sawing modes. Then again, the common recommendation is that users unplug or remove batteries from saws for every blade change.

Stuart’s Note: I once witnessed a consumer brand power tool rep accidentally press the trigger on a cordless drill while trying to change bits. The surprise on their face when the chuck started spinning told everything. I wonder what face I was making when they did it again and then a third time.

Safety concerns aside, this seems like an interesting concept, but it does have some limitations compared to non-transforming reciprocating saws and jig saws. This tool definitely seems geared toward the homeowner end of the market.

It doesn’t look like the shoe can pivot like on a recip saw, or that you can tilt the base to make angled cuts in jigsaw mode.

There is no variable speed.

How far does the motor stick out of the side? It may not be a big deal for a jig saw, but it seems like I’m always using a reciprocating saw by corners and other tight locations.

A 5 hour charge time won’t cut it for anything but the lightest tasks if you don’t have another battery.