ToolGuyd > Power Tools > Cordless > New Worx SwitchDriver is a Cordless Drill Driver with 2 Chucks
If you buy something through our links, ToolGuyd might earn an affiliate commission. 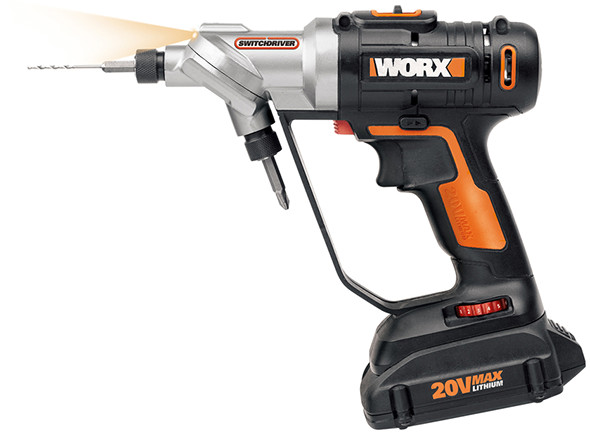 This is the new Worx SwitchDriver, a 20V Max drill/driver with two 1/4″ hex quick release chucks. The rotating dual chuck is said to make switching between 2 drill bits or screwdriver bits faster and smoother than ever.

The Worx SwitchDriver is one more example of how the brand’s engineers like to think outside the box. In recent years, other Worx tools include the XTD extended reach cordless driver and semi-automatic screwdriver.

The rotating chuck stage is angled such that one of the chucks is in the ready position, and the other is aimed downwards, alongside the hand guard. It’s not clear from the product description, but the chuck stage probably locks into place for use. I’m guessing that the protruding orange bit, just above the trigger switch, is squeezed to unlock the chuck positions. 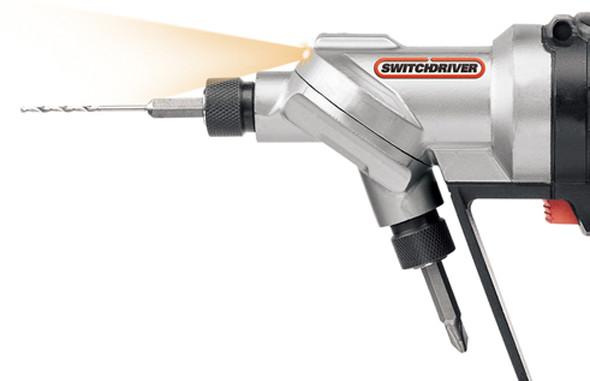 Features include electronic torque control, which helps to prevent over-torqueing or damage to a work surface. Users can set the torque level using the control dial at the base of the tool, near the battery. It also has a 2-speed gearbox, automatic LED worklight, and forward/reverse switch.

Max speed is listed as 1350 RPM, and max torque as 310 in-lbs. There are several errors in Lowes’ product specs, so don’t trust these numbers just yet. They seem reasonably, but aren’t certain.

The kit comes with (2) 1.5Ah Li-ion battery packs, a 5-hour charger, a couple of starter drill and screwdriver bits, and a soft case.

The Worx SwitchDriver is currently out of stock, but will likely be available soon. Buy it now to hold your place in line.

On one hand, the design of this Worx driver makes me want to laugh. It’s just so… awkward-looking. But on the other hand, I’m also thinking “that could be useful.”

If the 310 in-lbs torque specs are accurate, then this is a fairly lightweight drill/driver. That’s more than enough for most homeowner and casual DIYer needs.

I like the idea of an electronic clutch, and the placement of the control dial seems well thought out. You still have a traditional gear selection switch, forward/reverse switch, and pistol-grip trigger.

The 5-hour charger is a little unfortunate, but at least you get 2 batteries.

I don’t trust the $119 price. If I had to make a prediction, I’d think that it’ll drop below $100 during the peak of the holiday season. $79 sounds about right, but we’ll have to wait and see.

As for the rotating double chuck system… will it really be easier to rotate the chucks from one setting to the other, rather than simply swapping out 1/4″ hex drill or screwdriver bits? I find that hard to believe.

If this somehow had a drill chuck and a hex chuck, that would be different. But even a 3/8″ drill chuck would add so much to the bulk of the stage.

A retailer advertised this as a 3/8″ drill, but it looks to me like both chucks are designed to accommodate 1/4″ hex bits. The Worx SwitchDriver would be a lot more interesting if it had a built-in drill chuck. That’s just my stance. What do you think of the design?