ToolGuyd > Safety > 3M Pro-Grade Earmuff Review
If you buy something through our links, ToolGuyd might earn an affiliate commission. 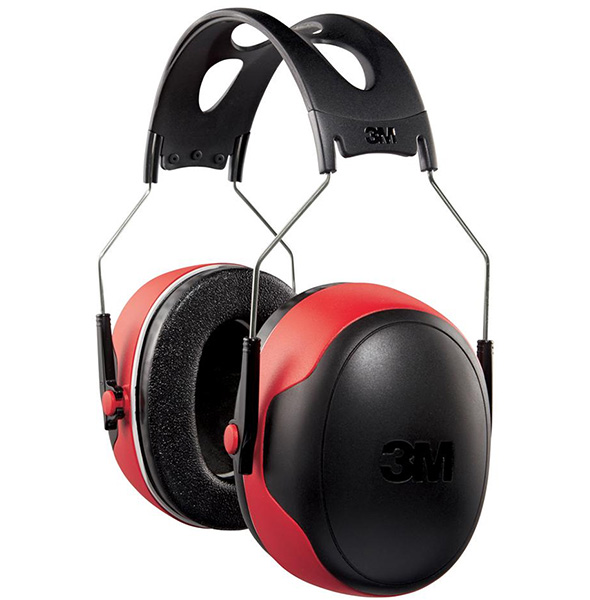 We’re currently in a year-long paid partnership with Home Depot. Part of that involves sponsored projects, like the DIY tool kit guide and giveaway I’ve been working on, and the other part involves a cache of tool samples that they send over every quarter for testing and review consideration. The reviews aren’t sponsored in any way, aside from the test samples being no-cost to me.

A pair of 3M Pro-Grade earmuffs arrived a few weeks after the initial test sample shipment, leading me to take special notice of it.

These earmuffs are rated as having a 30dB NRR when used as directed.

I’ve seen this model in stores before, 90565-4DC-PS, and they looked great except for one big hesitation – they’re made in China. My favorite go-to earmuffs, made by 3M/Peltor, are made in the USA and often costs a little less.

That’s why I’ve been hesitant to try these on my own – they’re pricier than my go-to earmuffs, and are made overseas.

I value quality and features over country of origin, and won’t hesitate to purchase imported products. It’s a decision I make on a case by case basis.

After leaving them to sit on a tool bench for a week or two – in their box – I started a quick project that I needed hearing protection for. My 3M/Peltor earmuffs were nowhere in sight, and another pair would have taken a couple of minutes to retrieve.

So I walked over, grabbed the 3M Pro-Grade earmuffs, and got to work.

I can immediately tell why they cost more than my go-to earmuffs – they’re better made. Well, not better made, but well, just better.

Compared to my go-to earmuffs, the 3M Pro-Grade has a nicer headband cushion. It’s rubbery, as opposed to cushioned fabric-like material. It’s grippier, but not any less comfortable.

The 3M Pro-Grade earmuffs fit on my head a little more securely, at least until I tweak and adjust my Peltor earmuffs.

Testing against Peltor Optime earmuffs that aren’t brand new but not extensively worn, the 3M Pro-Grade model hugs my head a little better. I’ve used the new 3M earmuffs a few more times, and so far I haven’t had any headaches or added discomfort.

I need a haircut. I wear glasses. My Peltors slide a little, or at least feel less than 100% secure if I don’t adjust them every use or every other quick use.

The ear cushion is a little firmer on the 3M Pro-Grade, which I think I like.

The Pro-grade has more room inside the ear cups. A LOT more room.

Every so often I double-up on hearing protection, wearing ear plugs and ear muffs over them. The Pro-Grade earmuffs, offering much more inner ear cup volume, might open up the possibilities as to what kinds of plugs can be used. I haven’t had too much difficulty with disposable foam plugs, but what if I wanted to wear flanged plugs with stems? The Pro-Grade could allow for that, while the ends of the plugs would hit the foam inside my Peltors’ ear cups.

Externally, the Pro-Grade earmuffs aren’t discernibly bigger, so they don’t take up any more storage space.

The 3M Pro-Grade earmuffs offer the same 30 dB noise reduction rating as the Peltor ones I’m used to.

3M says it has a comfortable vented headband that improves comfort when worn with hats, and has premium cushioning for all day comfort. On Home Depot’s site, they also say these are their #1 noise reducing earmuff.

I never had issue with the Peltor’s headband, but I think I do like the 3M Pro-Grade’s could be better. It does seem like it might slip less when worn over lots of hair or a hat.

I’m not going to say these are my new favorite earmuffs, because I just don’t know yet.

The fact is, I wouldn’t have bought these, and wouldn’t have tried them at all had Home Depot not arranged for a sample pair for review consideration.

I’m glad they did send them over, because these are great earmuffs. No, they’re not made in the USA, which I tend to look for when shopping for personal protective equipment, but I can’t deny how well they’re made, and how comfortable they are, all while providing the same noise reduction rating as the earmuffs I’m used to wearing.

I’m not ready to trade in my 3M/Peltor Optime earmuffs for these, but I plan to use the 3M Pro-Grade earmuffs more regularly. When it comes time to ordering new earmuffs, I might just another a second pair of these Pro-Grade ones.

Do I recommend these 3M Pro-Grade earmuffs? Absolutely!!

Do I recommend them as the BEST hearing protection earmuffs out there? They very well could be, but I’m not sure I can make this call yet. I am very fond and loyal to my Peltor earmuffs.

At the same price, I’d get the 3M Pro-Grade. My selection indecision only crops up when comparing Peltor prices at my typical supplier, and Pro-Grade prices at Home Depot.

I can’t tell you what’s best for your needs, but I can tell you that I’m surprised at how much I ended up liking these 3M Pro-Grade earmuffs.

I had assumed they’d be functionally the same as my 3M/Peltor earmuffs, with only the styling being different and possibly aimed at the consumer market. While the later might be true – it’s hard to say – the functionality is slightly different due to the completely different ear cup and headband design.

These aren’t simply looks-different earmuffs that are made overseas to increase the profit margin. They seem to be functionally better, at least in regard to comfort – in my opinion – while the hearing protection rating is the same.

I would have had a much easier time with this review if I didn’t already have favorite earmuffs that I’ve grown accustomed to.

This review could have used a lot fewer words to convey the same end-message, that I recommend the Pro-Grade earmuffs – but I wanted to show you where I’m coming from.

Thank you to Home Depot for supplying the test sample unconditionally.

CoverGrip Drop Cloths Stay Where You Put Them