ToolGuyd > Power Tools > Grinders & Sanders > 6-inch Bench Grinders: Craftsman vs. Ryobi vs. Porter Cable?
Happy New Year!
If you buy something through our links, ToolGuyd might earn an affiliate commission.

Alex is looking to buy a 6-inch bench grinder for sharpening axes and machetes, and possibly general purpose usage as well. He narrowed it down to three <$75 options – Craftsman, Ryobi, and Porter Cable, and asked for help choosing the best of the three. (Please chime in with your own recommendations!) 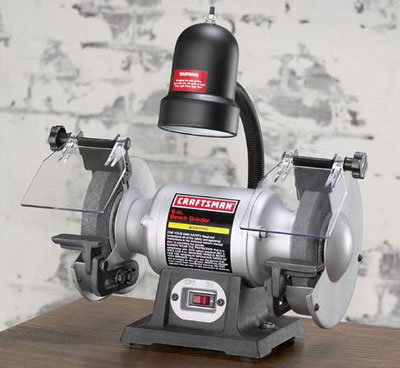 Going by the product specs, we know that the grinder has a 1/6 HP motor and weighs in at 22 lbs with a cast iron base. It comes with 2 grinding wheels – 36 grit and 60 grit. It also comes with clear wheel guards and what look to be flip-down tool rests. The power switch is a small lighted rocker. 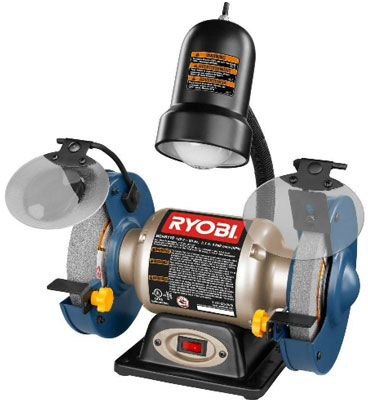 Ryobi’s bench grinder is built with a 2.1 amp 3600 (no-load) RPM motor, and features a heavy gauge steel base. Going by looks, the Ryobi grinder appears to be less substantial than the Craftsman model. The shields appear to be smaller, and the tool rests thinner. Also included are 36 and 60 grit grinding wheels and a coolant tray. 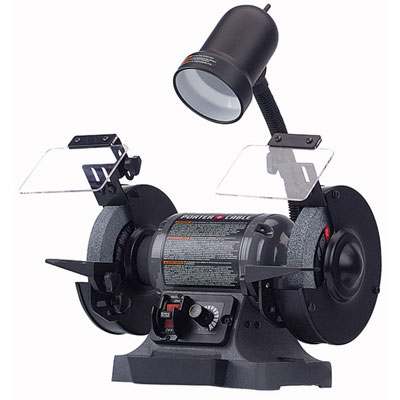 Porter Cable’s grinder sets itself apart with a 2.5A variable speed 2000-3450 RPM motor. It weighs in at 25.5 lbs and appears to have a cast iron base. Like the two other grinders, this one comes with 36 and 60 grit wheels. Also included are aluminum tool rests, a grinding wheel dresser, and removable water quenching tray.

All three grinders are single-store exclusives; the Craftsman grinder can only be purchased at Sears, the Ryobi at Home Depot, and the Porter Cable at Lowes, making a direct product comparison difficult. For the most part, all three grinders have reasonably positive user reviews.

Comparing the specs of all three grinders, and our memory of what they looked and felt like in-store, the Craftsman and Porter Cable would be the final two options. The Ryobi grinder looks to be in a slightly lower class, and better compares with these similarly priced Skil and Powertec units.

Between the Craftsman and Porter Cable units, it really is a tough choice, but our money would probably go towards the Craftsman despite the Porter Cable’s seemingly beefier base. The Porter Cable grinder does has a variable-speed motor, but an inline speed control can possibly be added to the Craftsman later on if needed. There are also dedicated slow-speed grinder options should 3400-3600 RPMs prove to be too speedy.

We also don’t like how the Porter Cable’s left tool rest is grooved for drill-bit sharpening. Even though we prefer the Craftsman’s out-of-the-box tool rests, Alex’s intended usage may necessitate some modifications anyways.

If not limited to retail-store models, we would recommend also checking out MSC and Enco’s sales flyers for a good deal on a budget industrial model. But that brings other issues to the table, including ambiguous specs, hefty shipping fees, and the inability to check one out pre-purchase in person.

Can anyone recommend a better sub-$75 bench grinder for Alex that will suit his axe and machete-grinding needs?