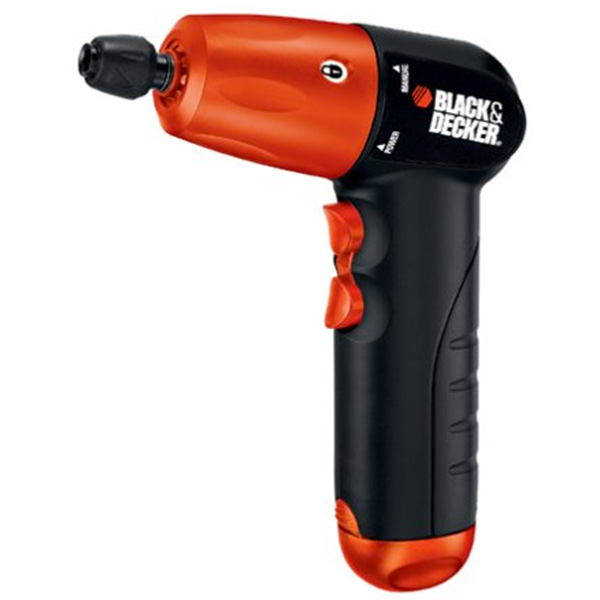 This small driver, model AD600, is powered by 4x AA batteries. Spec-wise, it’s an average light-duty cordless screwdriver, capable of delivering up to 40 in-lbs of max torque. It delivers up to 130 RPM and has a forward and reverse direction-selection rocker trigger switch.

There’s what looks to be a twist-to-lock function, to help prevent the driver from self-activating in a tool bag or box.

According to Amazon, the screwdriver comes with a set of 20 anchors and screws, as well as (2) starter screwdriving bits and (2) drill bits.

Is something like this appealing in today’s day and age, when there are plenty of 4V Max cordless screwdrivers with built-in Li-ion batteries and USB charging to choose from? Sure.

Something like this will probably be among my kids’ first power tools, or at least among the tools they can claim ownership over.

Come to think of it, my first power tool was also a Black & Decker cordless screwdriver, a small inline driver that I got for free for opening a bank account. It worked quite well, too, for its size.

Realistically, a cordless screwdriver like this is not going to hold a candle against a full-size drill. But, given its on-paper specs, it should perform comparably to a small Li-ion driver, although the performance might depend on the type of AA cells selected.

The form factor seems interesting. In theory, I like the inline orientation, which should be more comfortable to use than the inline driver I’ve used in the past.

More choices are always good, and I’m happy to know there’s still a small AA-powered cordless screwdriver for those who want one.

If you have a greater budget, there are plenty of well-regarded “pocket drivers” out there, but you’re probably not going to get a good one for anywhere near this driver’s $13 price.

Let’s reminisce – have you ever used an AA-powered cordless screwdriver like this one before?