ToolGuyd > Power Tools > Cordless > Blackout MVP: Milwaukee M18 Power Source
If you buy something through our links, ToolGuyd might earn an affiliate commission. 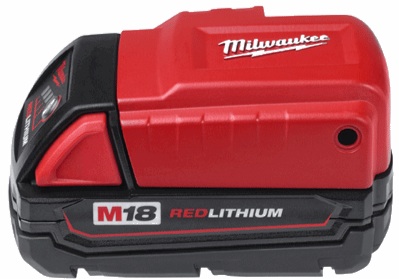 As I mentioned earlier in the week, Hurricane/Tropical Cyclone/Superstorm Sandy left us without power. We’re still without power, with the regional power company saying that power should be restored by November 5th, five days from now.

Prior to the storm’s arrival I had charged up six Milwaukee M18 lithium ion batteries, four 3.0Ah XC and two 1.5Ah compact battery packs, to go along with the M18 power source I had planned on reviewing next month.

The M18 power source, model 49-24-2371, allows for the use of M18 batteries with Milwaukee’s M12 heated jackets but also features a very handy USB charging port.

Milwaukee’s M12 power port ($30 via Amazon) can also charge devices via a USB port and 12V car charger socket, but I find the M18 power source to be more appealing.

I have gone through only one M18 XC battery thus far in about 40 hours and several smartphone recharge cycles. Later on tonight I will task a second battery with recharging my iPad and will charge my wife’s cellphone and blackberry overnight.

Going into the storm I knew that I would have maybe a week of normal smartphone usage, longer if I avoided power-hungry apps and 4G internet connectivity, giving me some peace of mind. Even with the power out I’m able to keep in touch with family and friends.

It’s also worth pointing out that the adapter can also be used to power Milwaukee’s M12 heated jacket. I have been testing one of the new fleece-lined jackets, and it’s nice to know that I’ll still be toasty when temperatures drop later in the week, long after my last M12 battery is fully drained.

Milwaukee’s M18 battery packs have a built-in power gauge, allowing me to monitor charge levels. I haven’t needed to swap out batteries yet, but I will soon since the first XC battery is down to 1-bar.

The M12 power port and M12 jacket power source can also charge USB devices, but there’s not that much weight or size savings when you think about how one M18 3.0Ah battery pack has more charging power than three compact M12 battery packs.

The M18 power source is priced at $30, and is compatible with all of Milwaukee’s M18 batteries.