A few months ago, I asked readers What Knife do You Carry?, and received a lot of different answers. I also asked about what types of knives you might want to see reviewed.

As expected, a great majority of the answers were all about folding knives. Folding knives are typically much more practical to carry than fixed blade knives. But there were some surprising answers and review requests.

I’d love to see you test some of the small fixed blade pocket knives that are around. Bradford Knives’ Guardian 3 comes to mind. I’ve often wondered if I would find one as useful as a folding knife or would it just be more cumbersome.

I wondered the same thing, about whether a Bradford Guardian3 fixed blade knife would be suitable for EDC (everyday carry), workshop use, or even professional use.

In the spirit of trying new things, I splurged and bought one in the summer of 2014. So when Moxy asked about the Guardian3, I was already in the process of testing it.

Let me just say this upfront – if you’re looking for a compact fixed blade knife, the Guardian3 is a phenomenal knife and great choice.

Why a Fixed Blade Knife?

This is something you might be asking yourself. Why the heck would I want to use a fixed blade knife outside the kitchen?

A fixed blade knife doesn’t have a pivot or folding mechanism that could fail. They are often stronger, tougher, more durable, and also usually require far less maintenance.

If you get dirt, sand, or grime in a folding knife, you’re in for a much longer cleaning session.

The Bradford Guardian3 is smaller and lighter than a lot of hard use folders.

Fixed blade knives aren’t for everyone – check out what I say in the sheath and summary sections to see why it’s not the ideal knife for me.

The Bradford Guardian3 pocket knife is an ideal everyday carry knife. As a 3.5 inch fixed blade knife with a full tang, the Guardian3 is a great tool that can be easily carried and concealed on your belt so you can use it throughout the day.

Whether you’re working in a warehouse, with wiring or boxes, or you just need to open a bottle at home, the Guardian3 can take care of it.

Bradford knives can be found at a number of dealers, such as BladeHQ, and Brad also sells them directly on his site.

If you order directly from Brad, you have a couple of choices to make:

There are also many handle colors to choose from.

If I had to choose again, I would ask if Brad could build it with similar handles as this one on BladeHQ. Mine is mostly black with blue accents.

The G10 handle scales are made from layered materials, and so it’s possible for the Black/Blue handle to look like the Guardian3 I have, the one on BladeHQ, the one on the Bradford Knives site, or maybe anything in between.

That’s not to say I’m disappointed – I love the way my Guardian3 looks. It’s just that I like the blues of the one on BladeHQ’s site a little better. But, if ordering from BladeHQ, there’s no guarantee that the knife I received would look like that.

I didn’t even give this a second thought until I started writing up this post and saw the different Black/Blue handle versions on BladeHQ and Bradford Knives’ sites.

Back to the point – why did I customize the blade the way I did?

I liked the look of the False Edge blade style, but was concerned that it was sharpened even a little bit. I emailed Brad, just to be sure, and he said:

The false edge or “swedge” tapers down, starting at full thickness at the jimping, [and going] down to the .030 flat near the tip.

I would consider this unable to be sharpened.

This is important, since a sharpened swedge would make this a double-edged blade, a legal no-no in a lot of places.

I can’t tell you whether there’s a significant functional difference between the different false edge and sabre grinds that Bradford Knives offers. I went with the false edge based on looks.

I own the M390 version, which Brad continues to sell. There’s also a CPM-3V version right now, at the same price. After doing some searching on the web and reading datasheets, it seems that CPM-3V is more of a tough tool steel.

The manufacturer says: CPM 3V is a high toughness, wear-resistant tool steel made by the Crucible Particle Metallurgy process.

As a reminder, this is what’s said about the M390 steel: [M390 was] developed for knife blades requiring good corrosion resistance and very high hardness for excellent wear resistance. 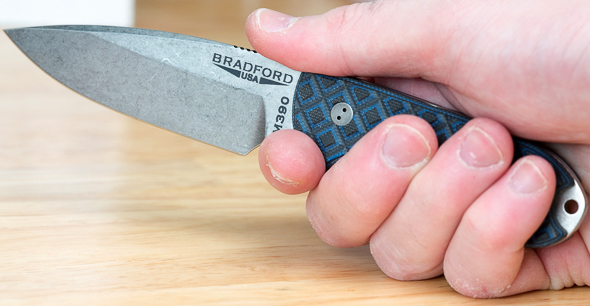 For a small knife, the Guardian3 is very comfortable to hold and use. It just fits right. For normal usage, the knife sits a little higher in my hand.

That’s not a very natural grip in the photo, I just wanted to show you a good approximation of how well the knife fits in my medium sized hands.

The knife is well sharpened, right out of the box. I can’t say I’ve used it on a daily basis, but I do try to use it regularly, and enjoy doing so.

The Bohler M390 blade steel alloy is said to be a super premium steel, and it seems to hold an edge really well. I’ll have to sharpen the blade eventually, and will try to report back with any findings in that regard. 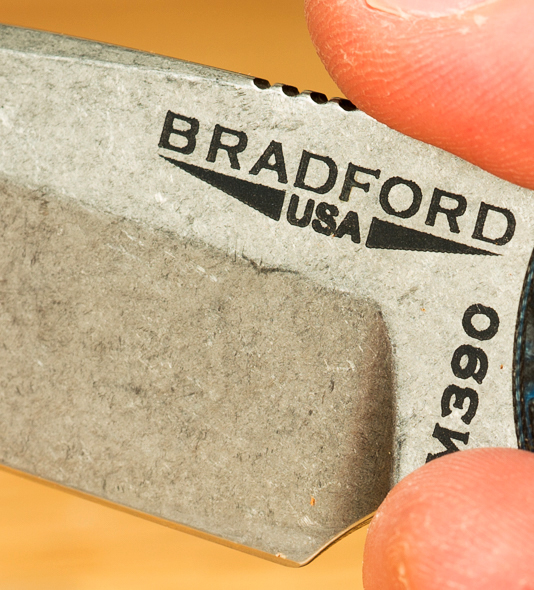 The knife feels good, it looks good, and it performs well. What more could I ask for?

I couldn’t quite capture the how well the stonewashed blade finish looks, but hopefully these photos at least do an acceptable job. 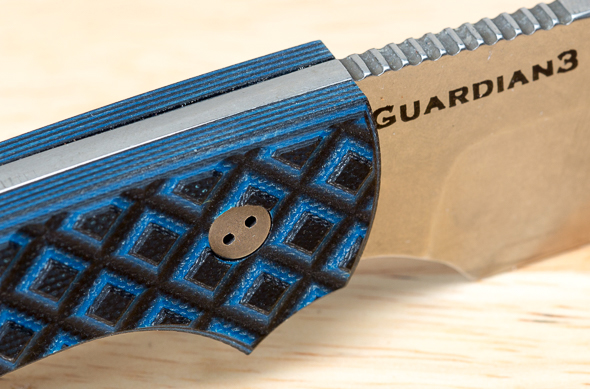 Here you can see what I mean about the layered G10 handles. But while I might like the handles to be a little bluer, I have plenty of blue knives. While not quite “one of a kind,” the variability does make this one somewhat unique.

You have your choice of single-color handles, and two-tones like this one.

If you want variety, you can purchase alternate color scales, instead of a whole new knife. Bradford Knives sells replacement scales for $35 per set, and each set comes with the special driver bit you need to swap the handle scales yourself.

You can also buy a set of different colored fasteners, for $6 per set.

That G10 texture, by the way, is just perfect. It’s simplistic, but grippy enough without being too harsh or abrasive.

The knife sheath is just about the only thing I don’t love about this knife. It’s designed for horizontal belt carry, and has a plastic liner halfway down to help guide the blade.

Every time I take the knife out of the sheath, the pointed part of the handle (between finger grooves) eats a little more of the inside. Sometimes the top of the knife scrapes off a small piece of the sheath instead.

I suppose I could order a replacement sheath from Bradford Knives, should the knife eventually wear out the sheath. Or I can find a suitable universal sheath as replacement. Or should I ever have the time, I can try to make my own sheath out of leather or Kydex, but that’s probably not going to happen any time soon.

If I carry the Guardian3, it’s in a bag, or elsewhere that’s not on my person. For that type of carrying, the sheath works just fine.

But if I can find a Kydex sheath for this, I might give it a chance carrying it in my pocket, although maybe not outside the workshop until I review the state laws again.

There are ways to convert the belt loop for vertical carry. I haven’t done so (yet?), because I rarely carry anything on my belt these days if I can help it. Maybe sometimes, on rare occasion, I’ll belt-carry a Leatherman multi-tool. Most of the time, the sheath stays at home and the multi-tool goes in my pocket. I also haven’t belt-carried a cellphone for quite a few years now.

I should also mention that drawing the knife out of the sheath requires a little care since it sits so deeply.

The Bradford Guardian3 is about the same overall length as a Leatherman Skeletool (review here), but you can see that the handle and blade are substantially more robust.

Which would you rather use for demanding cutting tasks?

I think the Bradford Guardian3 is a fantastic knife, and I have absolutely no regrets that I purchased it. I LOVE this knife.

But… if ToolGuyd wasn’t footing the bill for this purchase, I probably would have kept my curiosity about this knife to myself. Most of the time, fixed blade knives are a little too impractical for me.

Around the house and workshop, any knife within will often do, although I do have my preferences. Out and about, a folding knife is most often going to be more practical. In more sensitive settings, I’ll carry a small Swiss Army Knife or gentleman’s knife.

But that’s me. I wish I could carry and use this knife more.

According to the designer, the Guardian3 is:

Designed to replace your heavy duty folder and built for extreme everyday use.

I don’t doubt that one bit. Despite its compact size, this is a very comfortable and capable knife. While I have a couple of heavy duty folders, the truth is that I don’t have demanding needs, especially not the kind that translates to extreme everyday use.

I’ve often wondered if I would find one as useful as a folding knife or would it just be more cumbersome.

Well, think about how you would carry a knife like this. The sheath has a belt loop, but it’s not for slide on, slide off attachment, although I figure it would stretch out and wear in over time. And if not, you can buy or make a vertical carry adapter.

It pains me that my Guardian3 has fallen into the role of a special occasion type knife for whenever I can justify it, such as hiking trips, overnight road trips, and the such. And sometimes I’ll pack it in a tool bag just because I enjoy using it so much.

While working on this writeup, my Guardian3 has seen a lot more use than in recent weeks. I found myself reaching for it much more than my typical folders. Maybe it’ll become a permanent desk and lab bench knife, although that doesn’t do the knife much justice.

For me, this is not an EDC knife. I was curious about it, and now I know. Even though I can’t really carry this knife on a daily basis, it’s a purchase I would absolutely make again.

Bradford Knives recently came out with a Guardian3 flipper folding knife, but it’s a lot more expensive – $399 via BladeHQ. The styling of the Guardian folder doesn’t really do much for me, and $400 is above what I can justify for personal use. I can’t swing it for review purposes either, because I don’t think there would be enough reader interest.

But if Bradford Knives ever comes out with a more affordable Guardian3 sized folder, I’ll likely buy one without any hesitation.

The Bradford Guardian3 is priced at $159.

Certain customization options cost more, but not much more. It’s $10 more to step up to carbon fiber handle scale, and $10 more for either of the other handle finish options.

The knife featured in this review was purchased at full retail from Bradford Knives.