ToolGuyd > Adhesives, Sealants, & Lubes > A Quick Caulk Rack out of PVC and Wood
If you buy something through our links, ToolGuyd might earn an affiliate commission. 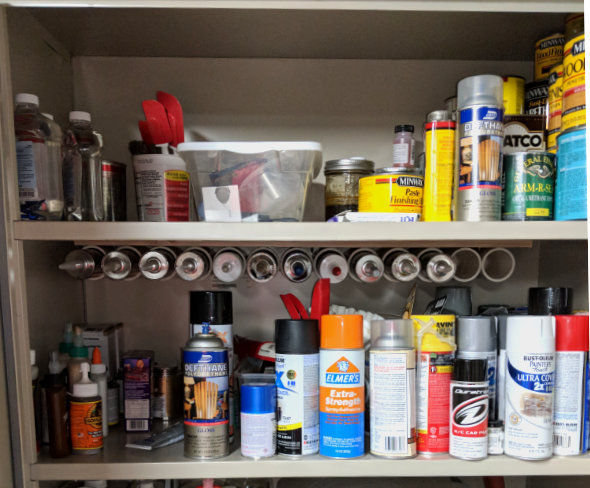 In the losing battle of trying to keep stuff organized and accessible, I’ve been doing what I can to knock down the clutter around my shop and make it easier to access the supplies and tools I have. In one particular cabinet, I store paint, glue, other liquids, and the requisite tools for these supplies. It’s always a mess; I’ll go through it every few years, throw out all the old expired stuff, and try to organize it, but it gets disorganized pretty fast.

A few weeks ago I had an idea, I was working with PVC pipe for another project and I happened to notice that a standard sized caulk tube fit almost perfectly inside some 2″ PVC scrap pipe. It got me thinking that I might be able to make the tubes of caulk and adhesive more accessible all while using some previously unusable space in the cabinet. 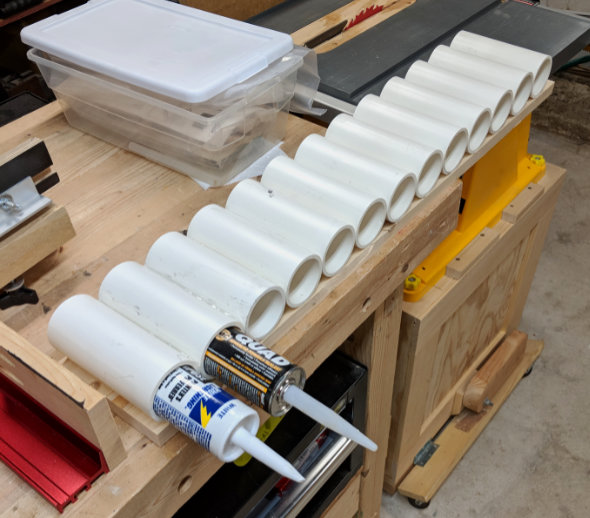 The next time I was at the hardware store, I looked for a 10 foot section of PVC pipe. While looking for the pipe, I noticed they sold “foam core” PVC along side the “solid core” PVC. I’d never seen foam core PVC pipe, but figuring that I didn’t need the burst strength of solid core for this project and that the foam core was significantly cheaper and quite a bit lighter, I picked up the foam core PVC pipe.

Since the shelves in the cabinet are folded sheet metal with about a 3/4″ lip for strength, I needed a base to lower the PVC pipe sections so I could get the caulk tubes in and out. I decided to use a 1×6 which got the pipe sections below the edge of the lip and gave me something other than the cabinet to fasten them to.

The 1×6 also worked out well because I didn’t want the PVC pipe to fully cover the caulk tubes. I thought that by leaving the first few inches of the caulk tube exposed, it would let me identify it without having to remove the tube. Cutting the PVC to 5-1/2″ lengths gave the caulk tubes enough support while exposing enough of the label to read.

I set up a stop block on the miter saw and proceeded to cut as many PVC pipe sections as I could get to fit onto the 1×6, which I had trimmed to a length that would allow me to get it into the cabinet without much finagling. All in all I was able to fit 13 sections of pipe onto the board. 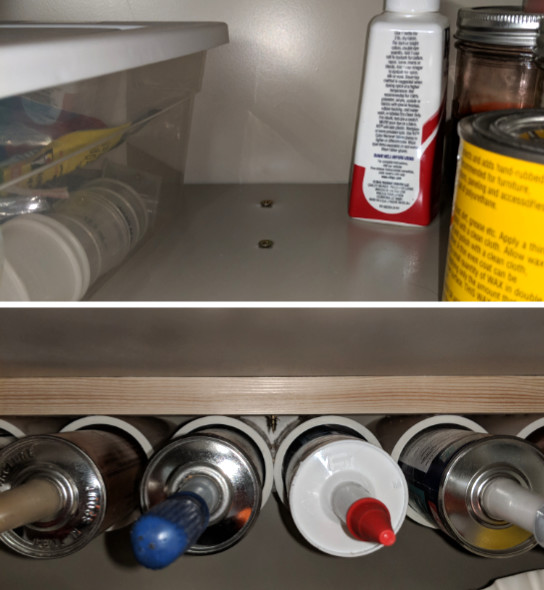 To fasten the rack to the bottom of the shelf, I drilled through the top of the shelf and drove screws down into the rack. I previously made sure the screws would land in the spaces between the sections of pipe. Even though the screw heads stick out above the shelf a bit, they really don’t interfere with loading and unloading the shelf.

That’s it. Now I am utilizing previously unused space in my cabinet to organize my tubes of caulk and glue. To be honest, I probably don’t need all 11 of those tubes, I should go through and figure out which ones have expired or hardened.

As a bonus, look below to see how I organized most of the tools that I keep in the cabinet. 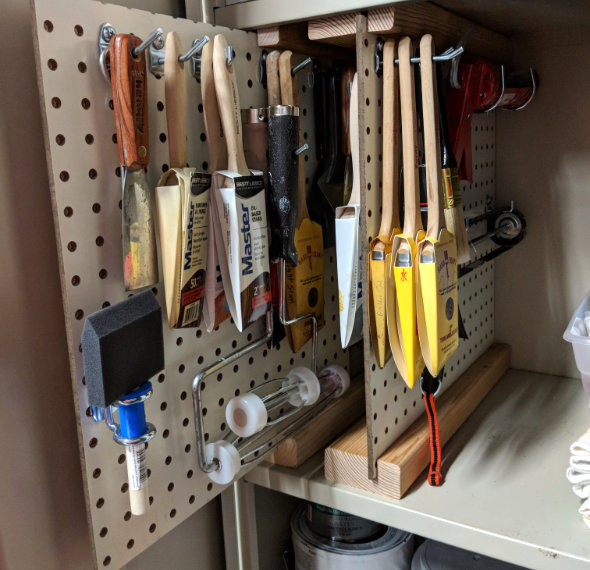 Here’s the quick explanation: I cut 1/4″ grooves in some 2x4s and fastened them to the top and bottom of the shelf, similar to the way I did it for the caulk rack. Then I just cut pegboard to fit the opening.

It really makes a difference when I need to find a tool – I don’t need to go digging around, I know exactly where to look.