ToolGuyd > New Tools > The Coolbox Tool Box Has Everything But the Kitchen Sink
If you buy something through our links, ToolGuyd might earn an affiliate commission. 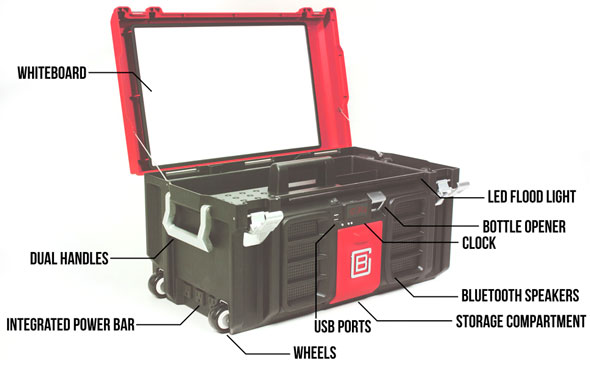 Over at Indiegogo, a new fundraising campaign recently popped up for the Coolbox, which is described as the world’s most advanced tool box.

The Coolbox has a slew of built-in features, such as a whiteboard, a 3-outlet power bar, a built-in 20V 5Ah LiPo battery, a 12′ retractable power cord, a bottle opener, LED flood light, USB charging ports, Bluetooth speakers, a smartphone and tablet stand, a smartphone compartment, and a digital clock.

Oh yea, it also has a tool storage compartment with removable tool tray, large carrying handles, and wheels. The Coolbox tool box also has a magnetic lid for keeping ferromagnetic steel hardware from getting lost. 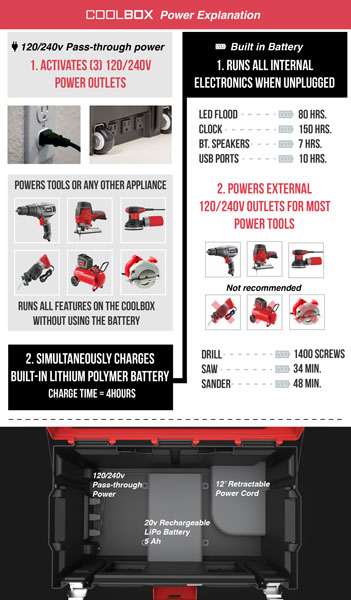 Right now, the fundraiser campaign price is $169 for early adopters and $179 for backers. They’re saying that the $179 price reflects $120 savings, which suggests a retail price of $299.

First – did anyone else notice that whomever designed the above “Power Explanation” graphic mistakenly grouped a Milwaukee M12 jigsaw as a power tool?

The electronic components are waterproof – a plus. The speakers are marine-grade 40W 3″ x 5″ speakers. Marine-grade sounds good, but 40W sounds like a big power drain.

The battery pack takes 4 hours to fully charge, and there are no details as to how big of a load it can handle. All the Coolbox crew says is that tools like large recip saws, circular saws, and air compressors aren’t recommended.

Overall, I like that the makers were able to cram so much functionality into a tool box.

BUT it looks to be a small tool box, despite a 65 pound load rating. And it’s said to be made from injection molded plastic. For $169or $179, I would expect to see structural foam or a heavy duty resin. From the prototype images, the Coolbox looks to resemble an everyday $15-20 consumer tool box.

Both of the co-founders are labeled as entrepreneurs, with one being excited to bring the highest quality, and most technologically advanced toolbox to thousands, and even millions of homes around the world.

I don’t really see how the Coolbox is “technologically advanced,” although pop-culture and gear sites are happy to describe it as such. Yes, the Coolbox tool box incorporates a bunch of electronics you don’t ordinarily see in tool boxes, but all of the tech is available off the shelf and in standalone products.

If this had half the features and was priced at under $75, I might have found it interesting as a DIYer or consumer tool box. But at $169 for early birds, $179 for other campaign backers, and what seems to be a suggested retail price of $299, this seems to be more of a cool “show off to friends and neighbors” gadget for people with money to burn.

On the other hand, if it is built with the highest quality, then at least it’s not a cheap do-everything box designed around as low a price point as possible.

Personally, I would rather spend $180 – or more if necessary – on the tool box and tech accessories of my choosing.

Yes, the Coolbox is unique. Yes, it provides some convenience by featuring a couple of popular accessories built right into the tool box. But what happens if one of those components fails, such as the LiPo battery pack?

I like modularity and customization. That’s mostly why I don’t like the idea of the Coolbox. The high pricing only hardens my stance. But what do I know? It’s Day 1 and the Coolbox already has 353 backers.

Leave a Reply to Dave in VT Cancel reply