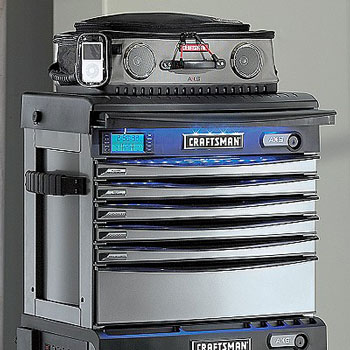 A few of Craftsman’s AXS tool storage units were on sale about a year ago during a massive Sears’ tool storage sale, and I remember that many of the accessories were on clearance as well. Sometime a few weeks ago, I realized that the AXS units weren’t featured in the most recent Sears/Craftsman tool catalog.

Today, a quick search of Sears.com shows that only 2 models are available with only 3 units in stock between them.

The AXS chests and rollaways were actually very solid units, once you forget about the unnecessary “blingy” aspects. I checked out the AXS drawers a few times in-store, and they were buttery smooth and solidly built. A lot of people had problem with the few plastic components, but to be honest this didn’t really bother me.

These storage units had premium prices which set them above most DIYer’s budgets, and the pros I spoke with complained about the AXS’s looks.

It will be interesting to see what Craftsman comes up with next. Looking back at the original press releases, the AXS was developed in conjunction with Waterloo and was introduced in Sept. 2007. What I’m wondering is what has Craftsmand and Waterloo been working on since then?