ToolGuyd > Hand Tools > Precision Tools > New Craftsman Ratcheting Tap and Die Tool Set
If you buy something through our links, ToolGuyd might earn an affiliate commission. 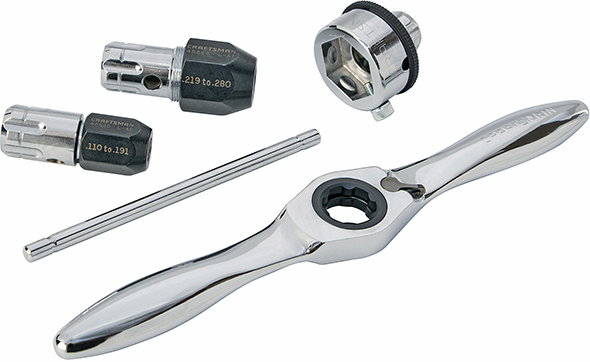 Craftsman has come out with a new 5pc ratcheting tap and die set.

Well, it’s new but not “new.” I’ve owned a Gearwrench version of this set for years now. I don’t pull it out often, but there are times when it comes in handy. I don’t think I would want this as my one and only tap and die tool set. Here’s why:

How do you reverse a ratcheting tap and die handle?! Answer: you don’t.

BONUS: The ratcheting T-handle can be used with Max Axess and Gearwrench pass-through sockets. 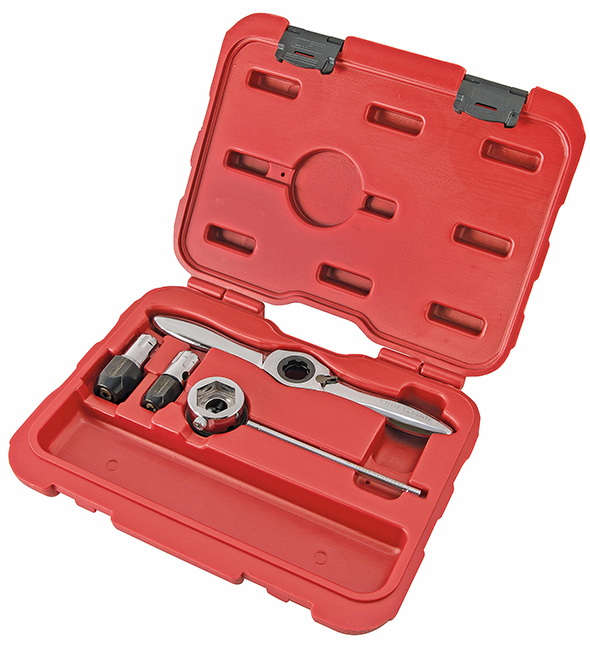 It comes with a red Craftsman tool case. There’s quite a bit of storage space at the bottom, but be sure to protect the cutting surfaces of taps or other tooling you might want to toss in there.

I bought my set a few years back, after it was on my wishlist for what seemed like forever. As mentioned above, I don’t think this is a good “first” tap and die tool set.

I don’t remember the last time I used a thread cutting die, but I use taps fairly regularly, and this is almost never my tool of choice.

With other hand taps, ones that aren’t designed for power tool use as my spiral taps are, cutting threads is a 2-step operation. Rotate clockwise to cut the thread, and then rotate counterclockwise to break up the chips. Don’t break the chips, and you could jam up your tap and break it in the hole. This is more of a concern with smaller size taps.

You could use the sliding handle with the tap holders, but it’s not quite as good of an experience as with a “real” tap holder – the handle shifts around too much.

Well, I suppose this can be one’s first and only tap and die tool set. The sliding handle helps to step in when the ratcheting handle is inconvenient, such as for 1/2-turn forward and 1/4-turn back sequences and the like.

It’s a good set of tools, even better if you own Apex Tool Group-made pass-thru sockets. (3/8″ equivalent size.)

Compared to the Gearwrench set, it looks like the Craftsman ratcheting handle is different, with a slightly different shape and the absence of grippy material insert.

Funny story – I bought my Gearwrench set from a local Sears store years back. I had a coupon, I believe $10 off $50 tool purchase coupon, possibly from when Craftsman still had tool calendars. I picked it up and the tool set rang up a lot lower – maybe $25? $30? Sears ran a lot of Gearwrench sales every now and then, so 40% or 50% wouldn’t have been unheard of.

So I continued shopping for more tools.

Once I had $50+, I went back to the cashier. This time, the Gearwrench tap and die tool set rang up at its full price. What?!

The cashier didn’t know what was going on, so we called a manager.

The manager was arguing with me that it must have been something else, or I must be mistaken, and that there’s no way there would be 2 different prices in the same day.

The cashier went to bat for me, and insisted that he saw it with his own eyes. The manager approved the override and I left, happy with my Sears shopping experience.

I’m not comfortable recommending that anyone buy this, but the tools are quite good, assuming the only differences between Craftsman and Gearwrench sets are the ratcheting handle styling and the cases.

This is the type of tool I can’t recommend, I can only tell you about.

I don’t regret my purchase, but on the other hand these tools aren’t as useful as I really thought they would be. It wasn’t an impulse buy either.

Long story short – Craftsman came out with a version of Gearwrench’s tap and die tool set. But after owning the Gearwrench set for a while, I’m of the opinion that it’s a solution to not enough problems.