ToolGuyd > Power Tools > Jobsite Radios and Speakers > New Dewalt Cordless Bluetooth Radio
If you buy something through our links, ToolGuyd might earn an affiliate commission. 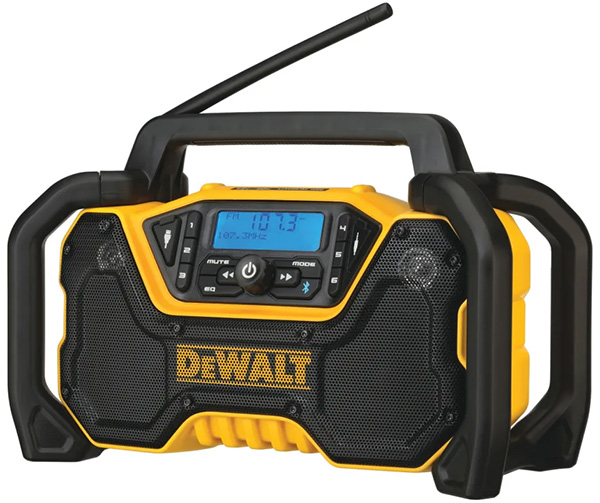 Dewalt has come out with a new 12V/20V Max cordless jobsite Bluetooth radio, DCR028, and it has a 45% smaller footprint than their DCR025 Bluetooth charger radio.

I must admit, I’m a little disappointed. I saw the headline of the press materials – Dewalt Announces Bluetooth Radio and Task Light – and my brain told me “whoa, a combination Bluetooth radio and task light – that could be useful.” But alas, this is just a radio, and we’ll talk about the new Dewalt worklight another time.

Still, a 45% smaller footprint than the DCR025 is a big deal. As long as the sound doesn’t seem smaller, who wouldn’t want a more compact radio?

Ah, but there is a catch. This is a new Bluetooth radio, but it’s not a charger. There’s no indication that this model is replacing any other Dewalt jobsite radios, and so you can still buy their Bleutooth charger radio if that’s what you want.

The absence of the charger is at least partially responsible for the smaller size of the new Dewalt Bluetooth music player, and it also costs less too.

Not only is the new Dewalt DCR028 radio smaller, its 45% lighter too (without battery).

The new radio can be powered by 12V Max, 20V Max, or FlexVolt batteries, and also comes with an AC power cord.

Here’s a look at the existing DCR025 radio and charger.

And here’s the new model again.

The new DCR028 definitely draws heavily from the DCF025’s design, with most of the differences being in size. Some of the features are of course different. Most significantly, the DCR028 doesn’t have a built-in battery charger, but it’s smaller and costs $100 less. More options are always good.

The LCD display looks bigger to me, but that’s only going by the press images. It’s also interesting to see how the user interface has evolved between models.

USB and aux input ports are added to the front control panel, giving you everything you need in one place.

Dewalt describes the DCR028 as a 12V and 20V Max radio. The DCR025 is a 20V Max radio and was designed to accommodate Dewalt FlexVolt batteries, which are quite a bit larger than 20V Max batteries. 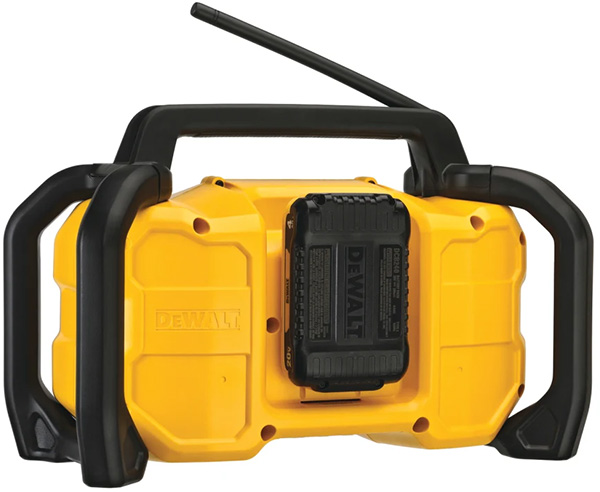 There’s no specific mention as to whether the new radio will also be compatible with FlexVolt batteries, but seeing as how the battery connection is open and at the rear of the radio, I see no reason why it wouldn’t be. FlexVolt batteries should fit just fine. It’s worth noting that it looks like the newest higher capacity and wider Dewalt 20V Max batteries should be able to fit without issue as well.

Update: I missed it – the press sheet does confirm that each of the new products (this radio and a new LED light) are compatible with FlexVolt batteries.

It doesn’t look like the new model has a bottle opener, a feature the DCR025 had on its left side.

Compared to the DCR025 the new Dewalt DCR028 Bluetooth radio has smaller footprint, is lighter, costs less, is compatible with 12V and 20V Max batteries, and does not have a built-in charger. Additionally, the DCR025 had 2 AC outlets, but it doesn’t look like this feature made it into the DCR028.

Sound-wise, the DCR025 is described as having 20W per channel woofers, tweeters, and air ports, but I can’t tell you how this compares to the DCR028’s 3.5″ woofers and 1″ tweeters. I wouldn’t think the sound quality could change much between models, but you never know.

Personally, I felt that the DCR025 was huge. A smaller and lighter Bluetooth radio sounds good to me, and I can live without the built-in charging feature, something I never use except in product testing.