ToolGuyd > Hand Tools > Mechanics' Tools > New Dewalt Ratchets are Hitting the Market
If you buy something through our links, ToolGuyd might earn an affiliate commission. 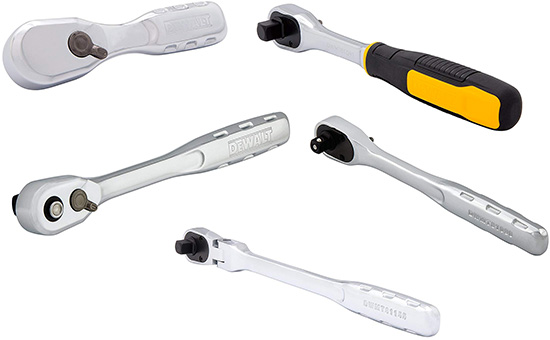 Several new-looking Dewalt ratchets just popped on Amazon. A search for the model numbers doesn’t turn up much, suggesting that these are brand new SKUs – either new designs or open stock versions of ratchets previously included in Dewalt’s mechanics tool sets.

I don’t want to sound negative, but I also don’t want to mince words. Dewalt is coming out with new ratchets… who cares? Why should I buy these?

I have always told myself that Dewalt mechanics tools were a good value. And they still are. But they’ve never had the best ergonomics, features, or pricing for what you get.

6 years ago, Dewalt boasted about their adjustable wrenches. They’re good, but I’ve seen horrible corrosion test results (conducted by a competitor), and they weighed a lot more than competing models.

Who was Dewalt aiming to compete with? According to them, Crescent.

With these new mechanics tools, I find myself struggling to understand their market. That’s happened to me about other Dewalt hand tools as well recently.

Dewalt has updated their mechanics tools a number of times in recent years. Does that mean they keep getting the designs wrong?

But on the other hand, I only ever see their mechanics tools at Dewalt media events.

Stanley Black & Decker has their Mac, Proto, and Blackhawk pro-grade tool lines, and there are even more brands that are popular overseas, such as Facom, USAG, and Sidchrome. At the lower end, Stanley and Stanley FatMax. Where does Dewalt fit in?

Are they aimed at “value-minded pros?” as Porter Cable tools have sometimes been described as being designed for?

Don’t get me wrong, Dewalt mechanics tools are perfectly fine. But I find myself completing the following sentence:

You should buy these Dewalt ratchets if…

Dewalt seems to have been moving away from a “these are heavier, and so they’re aimed at construction tasks” type of mentality.

The ratchet’s heads are said to be slimmer, and the handles definitely look and feel slimmer.

I feel like I should care more about this expansion. You know what? I think I know what the problem is. Dewalt doesn’t seem to care very much about their expansion. It seems that way because there hasn’t been much fanfare around Dewalt’s mechanics tool releases. Maybe they’re saving it for Craftsman.

Would you buy one of these new ratchets?