ToolGuyd > Power Tools > Saws > Dewalt Table Saw with Folding Stand Bundle is on Sale!
If you buy something through our links, ToolGuyd might earn an affiliate commission. 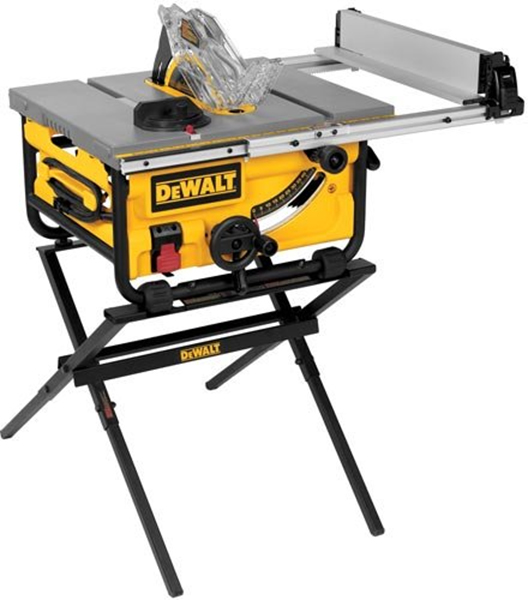 Adam wrote in with a deal tip. He spotted $40 coupon savings off the regular $429 price for the Dewalt DWE7480XA jobsite table saw, which comes with a folding stand.

This bundle was on sale for $329 last Black Friday, and was a limited time deal of the day in early December, for $299.

Six months ago I found your sight as I started to dabble in woodworking, and have been checking almost daily since. I decided real tools were needed and have bought a bunch of Milwaukee stuff already but now wanted to focus on good long term investments in a table and miter saw.

Per your recommendation the Dewalt 7480 and 716XPS have been on my radar since Christmas and boy do I wish I would have pulled the trigger then, because no deals have come close to the black Friday specials. Undeterred, I check your site, HD, and amazon daily and finally found a bit of deal on the table saw with stand.

Roughly a 9% discount compared to 23% black Friday specials but do you think this is the best we’ll get until that time of year again? A $40 coupon isn’t the $100 I wanted to save but it’s better than nothing. I just can’t get myself to pay full price on anything so I’m a little tempted today. I’ll just keep saying prayers the miter saw becomes a deal of the day, but at any rate I wanted to point this one out in case anyone else in the same frugal boat I am.

Looking back at some previous posts, I see that there was a deal on this table saw and stand bundle last April. It was a deal of the day, selling for $335.

If you need a portable table saw right now, then that is a good price.

With Amazon and a lot of other tool retailers, as well as tool brands, there’s not much that can be done to predict deals on individual tools.

If this was a very popular deal, maybe we’ll see a better discount around Father’s Day. Maybe we’ll see similar discounts next winter. On the other hand, there might be a new combo next year, which happens with miter saw “special buys.”

The current promo is a good one.

If the price drops substantially during the return period, you could always ask Amazon for a price adjustment. Sometimes they’ll say no. In the past, I have been encouraged to rebuy an item at lower deal pricing and return my first order for a refund, minus a fee for return shipping. But with something like this, the return shipping fee, even at Amazon’s discounted rate, will likely counteract any added savings.

But, I’m a “glass is half full” kind of person sometimes. With this $40 coupon, you’re still saving $40 off the regular price.

The coupon doesn’t have any expiration date, and can end any time.

For someone looking to buy the DWE7480XA special buy saw bundle now, I would ask this: how much is it worth to you to have the saw available for immediate use? If I had projects I wanted to tackle now, I’d be happy to save $40 and not wait for a deeper discount that might not come.

But if I had alternative methods of getting the same projects done, maybe I’d wait to see if the price dropped any lower. There’s a risk involved, because a better discount might not come.

Maybe the DW745 will be the focus of Father’s Day promotions. Maybe the DWE7480XA will be on sale next winter, but that’s more than 7 months from now. Assuming there will be a sale, is having immediate use of the saw worth spending the extra $8.57 per month? If the lowest price of the 2018 holiday season is $299 again, is having use of the saw until then worth spending the extra ~$12.86 per month?

Thank you for the heads-up Adam!

Now, knowing that Adam is on the fence, which direction should we push him towards?

With option 1), you save $40 now, and risk feeling bad if a lower price appears in the relatively near future.

With option 2), you hope to save more money, but could risk the $40 savings. There is also the possibility that Dewalt discontinues the DWE7480XA. If that happens, you would have to buy the DW745 and separate stand, or the “standard” DWE7490X bundle.

Personally, when I’m stuck in these tough purchasing decisions, and the future is completely uncertain, I go for option 1).

For smaller items, if the price drops in 30 days, and it’s a big enough difference, I’ll talk to Amazon and do a return-rebuy. I did that with my holiday purchase of a Dyson cordless vac, and ended up saving $30 ($42 after-tax price difference, minus $12 return shipping deduction). You can’t do that with a table saw bundle, though.

Option 1 gives me use of the tool NOW, making me feel better about saving less on the purchase. Option 2 involves more uncertainty, and often more risk, but can result in greater savings.

When I was growing my tool collection, $50 here or there would have made a big difference. Now, that’s still a good deal of money, but my tool budget is not as constrained. Time, space, and needs are often more important considerations. That’s what makes this such a tough deal to advise on.

Personally, if it’s something I need now, I’d buy it now and be happy about my $40 savings. But if I could stand to wait, I might. And if I lose out on the $40 savings, hoping for a better deal that doesn’t come around, I could still keep my eyes open for a deal on a different model.

Who here would go with option 1? Option 2?