ToolGuyd > Power Tools > Cordless > Discover Metabo 2016 – New 36V Cordless Platform and Hands-on With Lots of Tools!
If you buy something through our links, ToolGuyd might earn an affiliate commission. 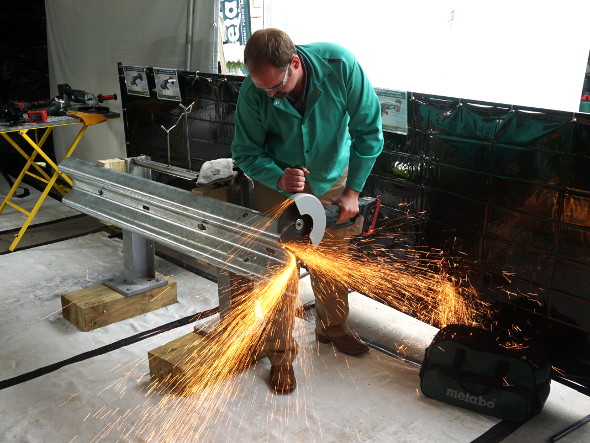 Last Tuesday (9/20/2016), Metabo flew me out Philadelphia for the Metabo Industrial Tool & Safety Symposium, or as we we told, the Discover Metabo event. At the event, I met many of the Metabo staff, learned about the company, and got my hands on some of their current and new tools in a hands-on environment.

Before we broke out into rotations to try the tools, Metabo gave a two hour presentation and awards ceremony. You want to hear about that, right? Nah, lets save that information for another post — on to the tools! 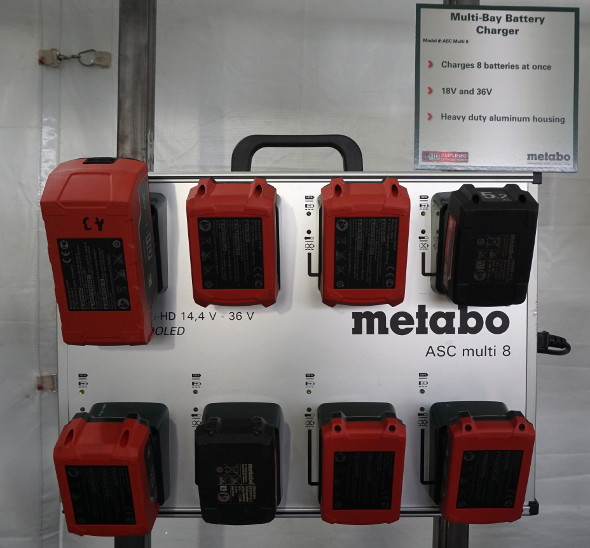 My first rotation was in the Cordless Workshop. You can’t have a cordless workshop without batteries and a charger, so here’s Metabo’s heavy duty aluminum 8 port charger. It looks like a briefcase, but who can argue with the functionality. It can charge 8 batteries, simultaneously. Plus it can charge either 18 or 36V batteries.

In other words, there are 8 separate charging circuits inside the housing.

The first tool we had the opportunity to try out was Metabo’s cordless bandsaw. Following is a video I took of a distributor in my group cutting some square stock.

When it was my turn to give it a try, I was impressed with how smoothly it cut through the stock, and also how quickly it came to a stop after I released the trigger.

Nope, no flying-around LED drone yet! 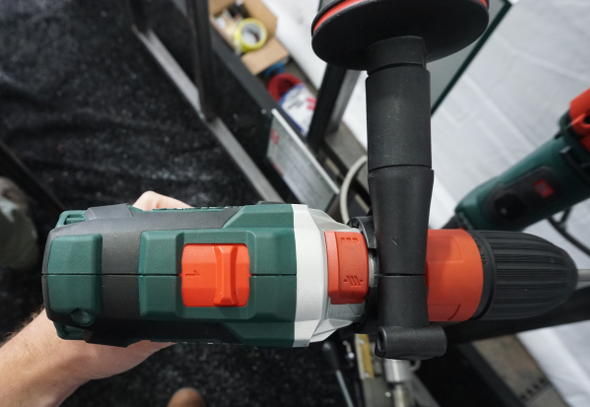 This 18V drill from Metabo has a thread-tapping function. When you slide the switch on top from drill to tap (the icon with the 3 diagonal lines), the drill disables the reversing switch.

In tapping mode, when you push the drill forward and pull the trigger, the chuck turns clockwise to tap the hole. Then, while still holding the trigger, pull the drill backward and the chuck automatically reverses direction to remove the tap from the hole.

It doesn’t seem like the tapping mode can be used to break chips; it’s probably best used with spiral taps and other taps meant for use with power tools.

Stuart’s Note: This is the new Metabo tool I am most excited about! I’ve had good experiences recently using a Dewalt drill to tap some aluminum extrusions, but it would be interesting to see if Metabo’s tapping drill can do a better or easier job.

At this point, somebody blasted an annoying siren to signal that we had to move onto the concrete tools rotation.

To start off the concrete tools segment, Metabo showed us their 5″ concrete grinder. For this demonstration, they attached a diamond wheel made for removing mastic from concrete. With a dust collection vacuum attached, there was no cloud of dust and very little debris.

Then they demonstrated what I can only describe as a concrete track saw. It is a masonry cutting/scoring tool that can be attached to their 5″ concrete grinder. It’s used for making cuts in concrete so you can chisel out trenches to run conduit or pipe. 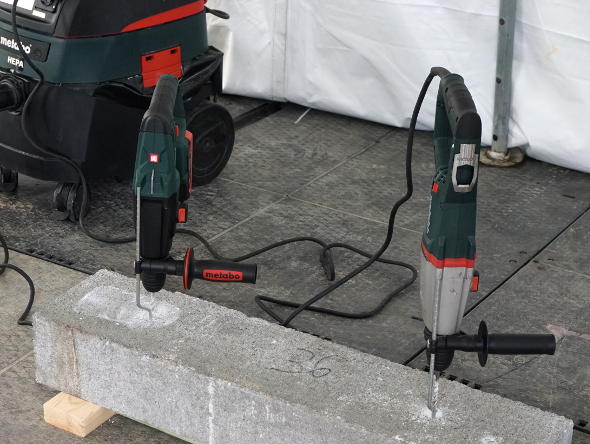 Once all the demonstrations were done, we were able to test each of the above tools plus 7 different sized drills, from a D-handle rotary hammer to a 2″ SDS MAX combination hammer. For the drills, the HEPA vacuums had a drill-through nozzle attachment to capture most of the airborne dust and leave the hole clean enough for epoxy.

Somebody blasted the siren again, and it was onto the technology expansion rotation. 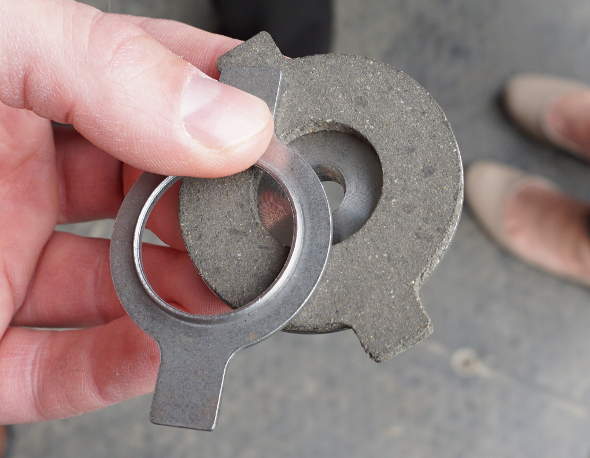 In this rotation, they showed us some of the technology that makes their grinders stand out from the competition. Above you can see the pad for the mechanical disc brake. This brake will stop the wheel in 2 seconds or less when you release the trigger. 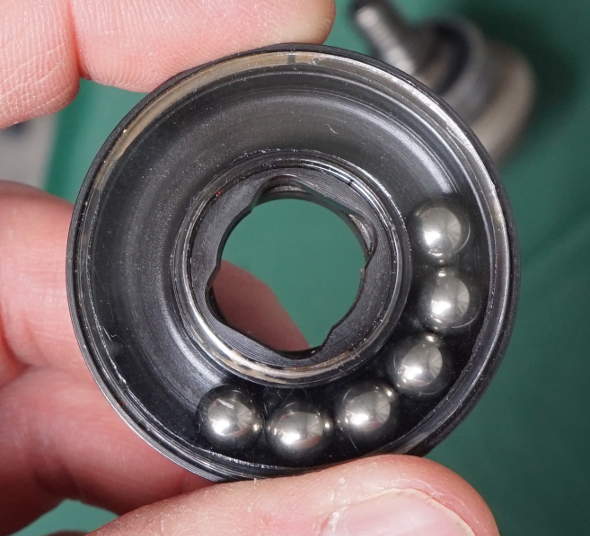 Shown here is an autobalancer, ridiculously simple in design, with just 6 ball bearings in a sealed cage that rotates with the drive shaft.

It lives on the drive shaft and is said to reduced hand and arm vibrations by 50%. Not only that, Metabo has said that the autobalancer also increases the life of the cutting disc or grinding wheel.

They also showed us a live demonstration of their safety clutch. One person intentionally bound the cutting disc while the other was cutting. When the cutting disc on the Metabo grinder was bound, it didn’t kick back or ruin the blade. 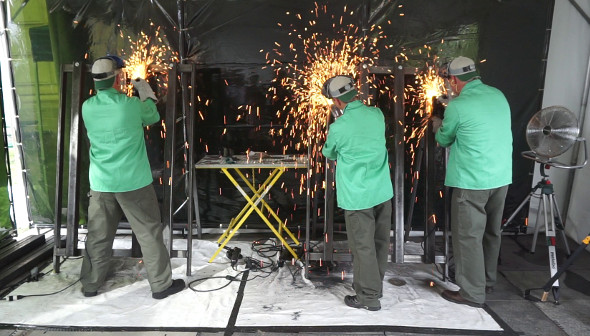 The first thing they showed us in this rotation was a race between the Metabo grinder and some of its competitors. The point of this demonstration was to show us that their tool would last longer, cut farther, and use up less of the cutting disc. The competitor on the right even stopped working halfway through the test.

Next they talked about their metal beveling tools (Metabo spells it with two ls). Think of these tools like a router for metal — they use carbide blades to create either a rounded-over a chamfered edge. These tools can cut the profile faster and cleaner than using an angle grinder. 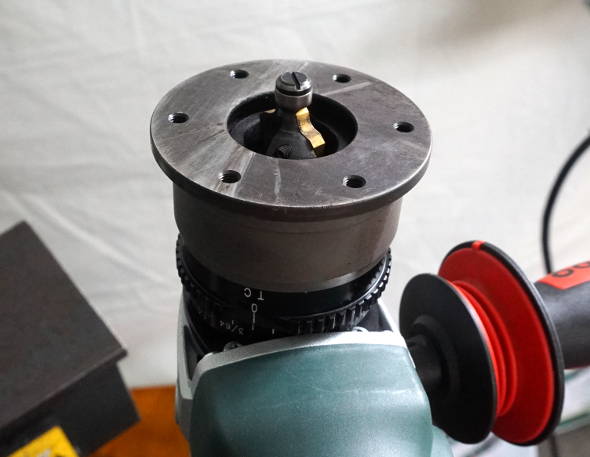 Here is a closeup view of the carbide blades on their cordless metal beveler. You can also see the black height adjustment dial around the base of the tool.

This first video shows the cordless beveling tool cutting a 1/8″ radius on a chunk of metal. 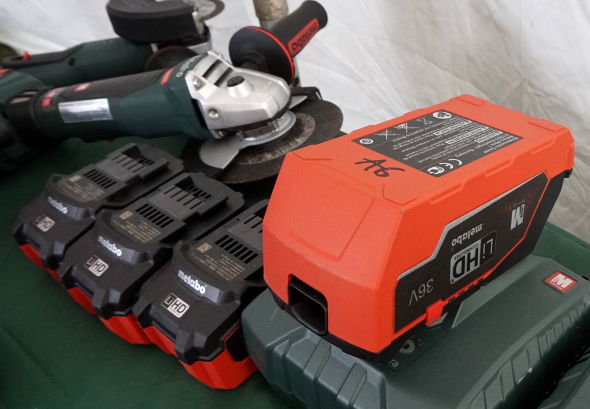 The short of it is that Metabo uses specially-made Li-ion 20700 cells that are 33% larger than the 18650 cells most other manufacturers use, and they have also beefed up their interconnects so the batteries can deliver more power to the tool.

In the latest application of their LiHD technology, they put 20 cells together to form their new 36V battery. This battery opens up “new application areas for cordless machines,” such as their newest 9″ cordless angle grinder.

In our last video you’ll see the cordless 9″ angle grinder cut through a standard guardrail in about 30 seconds. I got a chance to try the 9″ grinder on a chunk of steel and the first thing I noticed was that, when you pull the trigger, it has so much power that it wants to jump out of your hands.

I tried as many tools as I could in the time we had allotted. I was really impressed by the 9″ cordless angle grinder, but I think my favorite tools were the metal beveling tools. I knew that you could cut steel with carbide bits, but usually I’m thinking of a large tool holding those bits, such as a Bridgeport mill, not a hand-held tool, and certainly not a battery-powered one.

Metabo showed us at this event that they take their tool safety seriously. They have several innovations like their mechanical disc brake, safety clutch, and autobalancer that they feel make their tools safer and allow you to run them longer without fatigue.

They demonstrated a wide variety of specialty concrete and metal tools such as the cordless drill with tapping function, the concrete track saw, and metal beveling tools to give better results and help get the job done faster.

This was just an overview of the Discover Metabo event and there are still more technologies and tools he we hope to cover in the future. Is there any tool or technology from Metabo that you are especially excited about?

*I’d like to thank Metabo for flying me out to Philadelphia for their Symposium and their hospitality while I was there.