ToolGuyd > Hand Tools > Layout & Measuring > Double-Checking My Anvil Tape Measure’s Marking Widths
If you buy something through our links, ToolGuyd might earn an affiliate commission. 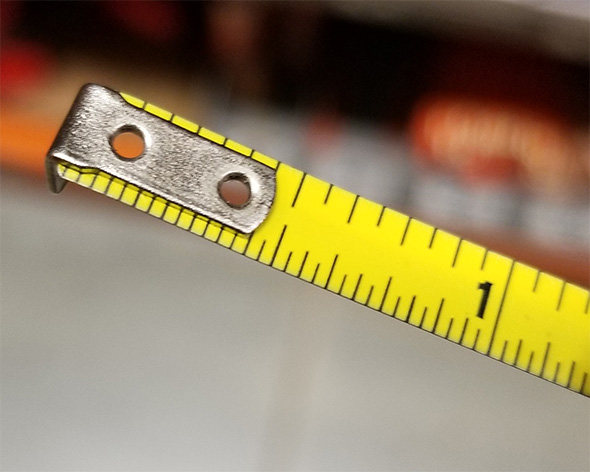 Yesterday I posted about the new $1 Anvil tape measure keychain that I bought. This morning, I woke up to a couple of polite emails and comments asking me to double check what I said about its markings, and one comment that said the same but in a more excited manner. 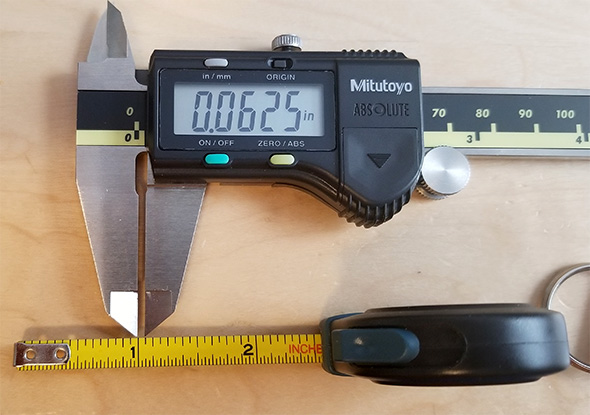 I can see exactly what’s causing the misreadings. And for everyone who did count wrong, it was certainly possible for me to make that error too, and I’m sure I’ve done it with other tapes or rulers in the past. The problem here is that the tape is so small that the hook covers nearly half an inch.

So maybe because of the hook some people started counting from the 1/2″ mark?

Or maybe it’s the proportions of the tape. I did say that this tape is very thin and floppy. Those tick marks are really spaced 1/16″ and 1/32″ apart.

From the image, I guess it does look like 1/8″ spacings, but they really are 1/16″. The entire tape is just 1/4″ wide. I actually wrapped the tape in a loop in order to use it to measure itself. You can’t do that with most other tape measures that have sturdier blades, at least not with only 6 inches extended.

In other words, if you also saw 1/8″ and 1/16″ marks instead of 1/16″ and 1/32″, don’t feel bad! I’m actually very happy that this happened, because it means you guys are reading carefully! And, I appreciate corrections, because I do make mistakes.

This gives me an idea for a future post – a discussion about the pros and cons of starting measurements at 1-inch instead of the “zero” point.

Update: This following part is for Nathan.

Here’s the vernier calipers measurement. I still use these calipers, but more often for setting measurements than making them.