ToolGuyd > Power Tools > Drills & Drivers > Time For a Bigger Drill Press – Recommendations?
If you buy something through our links, ToolGuyd might earn an affiliate commission. 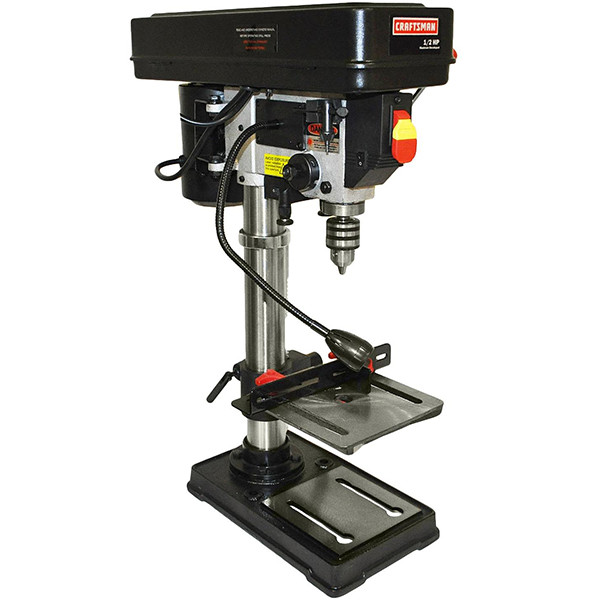 I know it’s not a glowing recommendation, but I have a Craftsman 10-inch benchtop drill press, similar to the one shown here, and it’s not bad. It’s decent actually.

But the table is too small for [easily] supporting larger workpieces, and also too small for certain accessories, such as woodworking drill press tables and the such. I replaced the stock chuck with a Rohm keyed-type chuck, although the stock one wasn’t bad.

I have more workspace now, and have been debating whether to step up to a larger benchtop drill press, or if it’s a good time to move to a floor-standing model. Previously, I had debated whether to upgrade from a 10-inch benchtop model, to a 12-inch one.

Benchtop or Floor-Standing, What’s Your Say?

There is much greater selection of floor-standing drill presses than benchtop, and now I have the space for one. Which direction to go in?

I don’t care much for gimmicks. The laser on my Craftsman drill press isn’t as accurate as other positioning methods, and if I need a worklight, I’ll add my own. A digital readout might be convenient, but I’ve not been terribly impressed with the one on my smaller Micro-Mark drill press.

Some drill presses offer electronic speed control, which seems like it could be a useful feature. Not only would they be quicker and easier to adjust than those that require moving a belt between pulley sets, but they should allow for dialing in speeds to in-between settings. What’s not to like?

My search has led me to quite a few options, but none of them really stand out to me. Most of them have a mixed tone of user reviews, with some being encouraging, and others urging potential buyers to stay away.

I thought my search would be a lot easier if I went with a woodworking-specialized machine, but after looking into Powermatic, I’m seeing mixed reviews even on their $1400 model. That’s also more than I was initially looking to spend.

My needs are almost as varied as they come:

I don’t really need much more capacity than my 10-inch can provide, but it would be nice to have slightly more throat depth. My main interest in going with a larger size is for the larger table.

I never really pushed the motor of my 10-inch Craftsman bench press to its limits.

Do I go with a 12″ benchtop or 15″ floor-standing? There are also 15″ benchtop models as well. Or do I spring for a higher capacity machine and never have to upgrade again? Decisions, decisions!

I keep getting roadblocked in my drill press upgrade decision. I don’t need to upgrade, but I have good reasons to at least consider it.

Eventually, I might just build my own height-adjustable table that attaches to the column of my 10-inch drill press. But given how many projects are on my to-do list, it’ll be a long time until I could seriously consider this.

At this point, I’m almost ready to give up the idea of an upgrade for another couple more months. This isn’t the first time I’ve revisited the decision to upgrade, and it might not be the last. But before I give up, I figured I’d ask for your recommendations. Plus, I’m sure I’m not the only one looking to buy a new drill press.

I thought about reaching out to brands for loaners or test samples so that I can better explore the intricacies of different models in a roundup post, but I don’t look forward to the prospect of having multiple drill presses to test and evaluate equally. That would be a major project in itself, and I already have too much on my plate.

I certainly wouldn’t mind it if the perfect drill press magically appeared at my doorstep, but I don’t think that’s going to happen.

I wish there was a place I could go to, armed with a box of drill bits and raw materials, to try out all the models I’ve been researching.

If you bought a new drill press in the past few years, which one, and would you recommend it? Extra gratitude if you can describe what you use it for.

And yes, I know that there are plenty of vintage models on Craigslist and Ebay, but that’s not what I’m looking for right now.