ToolGuyd > Power Tools > Cordless > New EGO Nexus Escape, a Cordless Battery AC Inverter
If you buy something through our links, ToolGuyd might earn an affiliate commission. 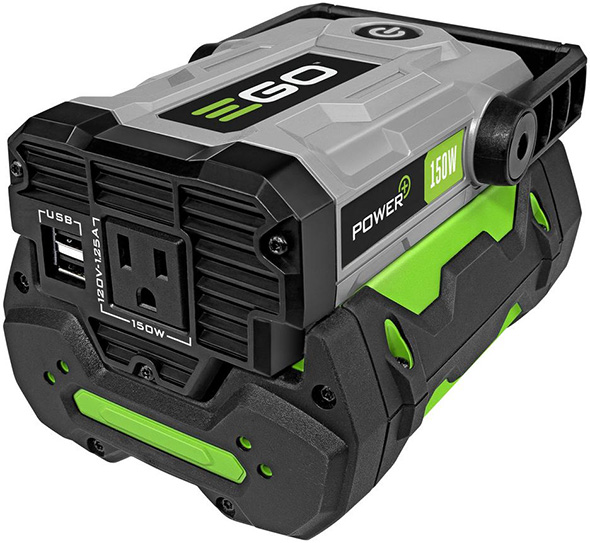 After teasing fans on social media (you should see some of the questions we’ve received about this!), EGO released some information about their new Nexus Escape power inverter.

The EGO Nexus Escape is a 150W inverter that works with the brand’s 56V Li-ion outdoor power tool battery packs.

They say this about its capabilities:

[It can] power anything from a tablet and laptop while out and about, lamps in the house, even your TV and router in a power outage.

There is a single 120V AC outlet, and (2) USB plugs. The 120V AC outlet can deliver up to 1.25A of current. EGO has not yet responded to our request for more details about its features and capabilities.

A battery and charger are NOT included.

As EGO advertised, that’ll keep your laptop powered, or some household lamps.

According to a quick internet search, a Sony 55″ TV has a power consumption of 139W. Different sources will have different power consumption rates, such as cable boxes, streaming devices, internet routers, or gaming systems. So while the device can power a TV, you might run into problems depending on the size.

What I’m alluding to is that 150W isn’t all that much.

I have been using Dewalt’s portable power station (and still love it!), which can deliver up to 1800W of power, and can handle peaks of up to 3600W. It’s larger and more expensive, but more versatile.

Several readers asked about whether the new EGO Escape Nexus inverter can power any corded power tools, and that’s unlikely. 1.25A might be enough for some very light duty tools, and maybe some efficient LED lights, but that’s about it.

EGO shows this as being more of a portable device charger or a very light backup.

Less of an “escape,” I see it more as a way to get portable USB charging power without a big investment. I imagine that most users are already bough into EGO’s system, and for them it makes sense. Why not put pricey EGO battery packs to use during off-seasons, or when away from your garden tools, and for less than it would cost to buy comparable all-in-one devices with built-in singular-purpose batteries?

Our newest innovation will let you Escape the garage and use your EGO batteries to power more than just your lawn and garden tools.

I suppose this is where the wild “do you think it’ll power my…” questions I’ve received and seen have come from.

Looking at EGO social media, there are advertisements of this being a “Must Have.” I cannot possibly understand that – am I missing something?

Useful? Maybe. But I’m not at all excited about its modest capabilities.

We’ve been through a few multi-day blackouts in recent years, and 18V power tool USB adapters sufficed for keeping our smartphones and tablets charged. Would a 150W power source have helped with anything? Possibly, but it also would have been larger, heavier, and simply more cumbersome to move around.

I had a Dewalt 20V Max battery and USB adapter on my side table, charging my smartphone, and then my tablet. I couldn’t have done the same with this. There are smaller, lighter, and cheaper ways to get a battery-powered USB device charger.

The $100 price is decent, if you already have EGO batteries and a charger. If not, then you might be better off with a smaller device (for USB charging) or all-in-one system for AC inverter use.

The $499 Anker Powerhouse battery bank has a 120W max 110V outlet (as well as other connection types at other voltages), and 434Wh energy capacity. What’s the watt-hour capacity of an EGO battery pack? EGO’s 7.5Ah battery, currently $345 at Amazon, comes close. That brings the cost to $450 for EGO inverter and battery, and you still need a separate charger, AND the EGO lacks a lot of the Anker’s features.

There are several Goal Zero Yeti portable power stations, also in the $450+ price range, although there is also a smaller one still available at some retailers. There are numerous other battery-based power generators, such as this one, which offer all-in-one power sourcing.

The EGO inverter does look to be a reasonably good value for light outdoors or power backup needs – IF you already bough into their 56V Li-ion tool system. If you’re in that camp, this gives you portable power with just a $100 investment.

This also isn’t the corded tool power source that a lot of people thought it could or would be. Maybe EGO is just testing the waters, and something better will follow?

Looking at the response on social media, aside from the one guy who’s praising it as a “Must Have,” there are bound to be disappointed folks who were hoping for something else. One person hoped for it to be a cordless pressure washer. Another wished for a cordless wet/dry vac. Another, a worm drive circular saw.

Lastly, there’s an on/off button on the top of the inverter, but is there a battery fuel gauge anywhere?

As an aside, Chervon, EGO’s parent company, acquired Skil and Skilsaw from Bosch two years ago. Do you think we’ll start seeing some synergistic developments between the two brands?

EGO, if you’re reading this, please add a 12V DC port and some weather sealing, and improve its operating temperature so that it can be used below 32°F. Do all of that, and you’ll attract a lot of telescope users. Add a clamp and ensure it delivers a pure sine wave output, and you’ll attract a lot of photographers and maybe even videographers! Bump up the power output of the next version, even if it requires (2) battery packs, and you’ll make corded tool users happy.

For all you EGO 56V lawn and garden tool users out there – will you buy one?