ToolGuyd > Power Tools > Cordless > New EGO Nexus Portable Power Station
If you buy something through our links, ToolGuyd might earn an affiliate commission. 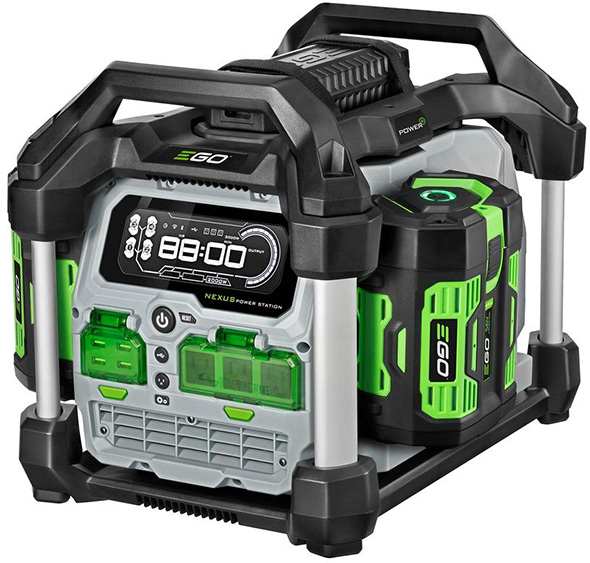 The Ego Nexus portable power station is a much, much bigger and more powerful source than their Nexus Escape, a 150W inverter that came out last fall.

Ego is advertising that their Nexus portable power station can power a refrigerator in the case of a power outage, or a microwave for quick dinner cooking. They say you can bring it camping, hiking, boating, tailgating, or anywhere else you might want convenient power.

They say it’s “weather resistant.” There’s no mention of the Nexus portable power station being IP-rated against dust or rain.

It also features “Bluetooth pairing” and “WiFi pairing,” but Ego doesn’t specify what that means. Perhaps there’s an app that notifies you about charge capacity.

The output is a pure sine wave, which Ego says runs cooler and more efficiently.

The Ego Nexus portable power station is powered by Ego 56V Li-ion batteries, requiring just one, but working with up to four.

Examples of what it can power with (2) 7.5Ah batteries:

Ego also points out that, because it doesn’t use gasoline, you can safely use it indoors as well as outdoors. Being battery powered, it’s also quiet.

The Ego PST3042 kit comes with the Nexus power station and (2) 7.5Ah batteries

There are a lot of questions that come to mind. You can use up to 4 Ego 56V batteries of any size and in any combination, but how does that work? Does it drain them one at a time, or simultaneously, in which case what happens if you use batteries of different capacities?

How long does it take to recharge the batteries when using the Nexus portable power station as a charger? They say overnight, but does that mean 4 hours or 12? Does it charge them one by one, or simultaneously?

What kind of remote control or monitoring can be done through the Bluetooth and WiFi connections?

Despite all the unanswered questions, the new Ego Nexus portable power station is a logical and welcome addition to their 56V cordless outdoor power tool lineup.

How does it compare to a gas generator? At the bottom of the Ego Nexus listing, Home Depot has some “similar options you might like” recommendations. There, they advertise a 4-outlet 4000W surge/3500W running gas generator, with 10-hour runtime at 50% load, priced at $249 as a “special buy.”

The Ego Nexus portable power station is advertised for home standby, jobsite, and recreational use. It seems capable for their purposes, but keep the 2000W continuous running wattage in mind. That should be plenty for powering many types of corded power tools.

Having the built-in battery charger is a nice touch, as it means you can plug it in at the end of the day and have it ready to go the next morning.

That it can be powered by 1-4 Ego 56V Li-ion batteries is a surprise, but a very welcome feature. Hopefully they eventually release a power station-only model, without batteries, so that existing Ego users can buy one without taking a full $1200 hit to their wallet.

What that means is that this is only a 2000W (continuous) when used with Ego’s highest capacity battery (or batteries?). With their smaller batteries, it’s a 1200W power source, or even 600W. On one hand, that does mean that any Ego batteries can give you some juice.

The 2x 7.5Ah battery kit configuration also makes more sense. But that also leads to more questions – what happens when unmatched batteries are connected? If you want to populate the other 2 battery positions with smaller battery packs, does the Nexus power station’s wattage change? With your choice of battery affecting not only charge capacity and runtime, but also wattage output, do you really have a choice? Ego needs to be clearer about how different combinations of batteries affect the Nexus performance.

At this time, Ego says “Works with 1, 2, 3 or 4 Ego batteries of any size, in any combination,” but you have to dig into the user manual to learn that different batteries can reduce the power output rating of the device.

There’s another wattage example in the user manual:

So, with 2 4.0Ah batteries, it can provide up to 1200W of power. What happens then if you have 2x 7.5Ah batteries and 2x 4.0Ah? This isn’t clear in the product listings, but at least it’s good to be able to see this information on the Nexus’s display.

Do you think this will be a jobsite alternative to gas generators?

Hopefully Ego can answer some of our questions – we’ll follow up once we learn more.