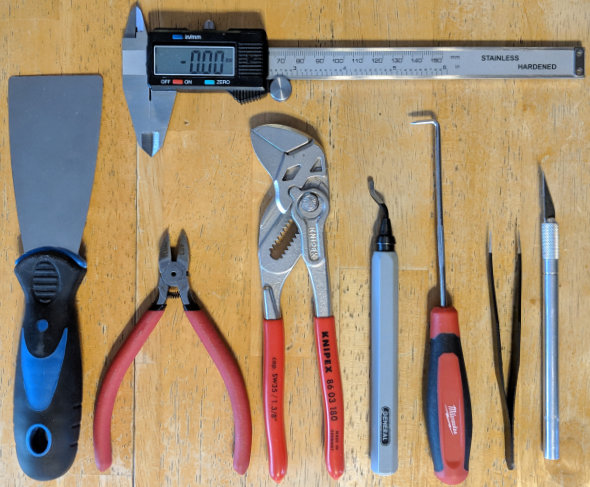 After you purchase your first 3D printer, you’ll probably need some extra tools that nobody told you about, to do things like remove the print from the build surface, remove plastic flash and supports, or modify the part itself.

In no particular order, here are the some tools I’ve found necessary so far, and some personal recommendations where applicable.

For the longest time I’ve been using a regular 1″ putty knife to remove prints from the build surface. That changed when I purchased a PEI (Polyetherimide) sheet for my print bed. What PEI does is eliminate the need for tapes, glues, slurries, or what ever concoction you’ve figured out to get the filament to stick to the build surface.

The downside is that sometimes the prints stick too well to the PEI. I started using a 1/2″ wood chisel to pry the prints off the surface. The problem with a chisel is that you are prying with a really sharp object, and I’ve sliced my finger open a few times trying to remove a print. 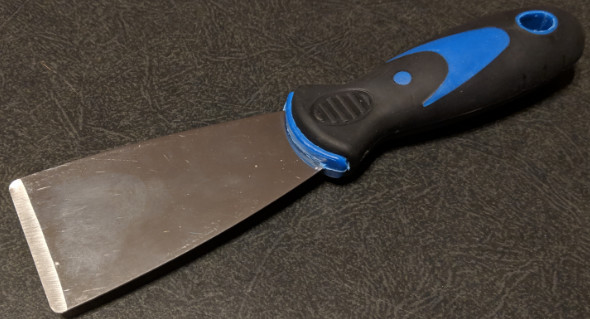 When I received the Dremel Digilab printer test sample, it came with a specialized 2″ print removal tool that looks like a putty knife. However, this tool differs from a putty knife in two important ways: the blade is thinner, and it is ground down to a sharper edge. 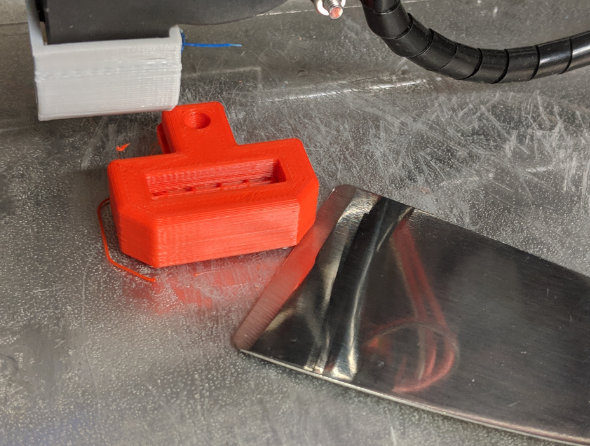 The almost knife-like edge allows you to get underneath a print to separate it from the bed. I prefer using this tool over the chisel now because it works just as well and is a whole lot safer. 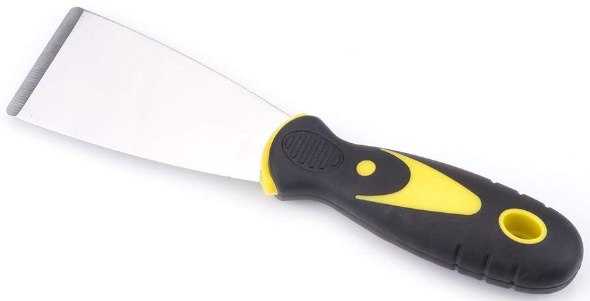 I will eventually have to return the Dremel printer (as the test sample is a loaner), and with it the print removal tool, so I went looking for a replacement that I can keep for myself. I think I found Dremel’s source for the tool: FYSETC. They look to be a Chinese company that either makes or resells an identical print removal tool. It’s available on Amazom for $9. 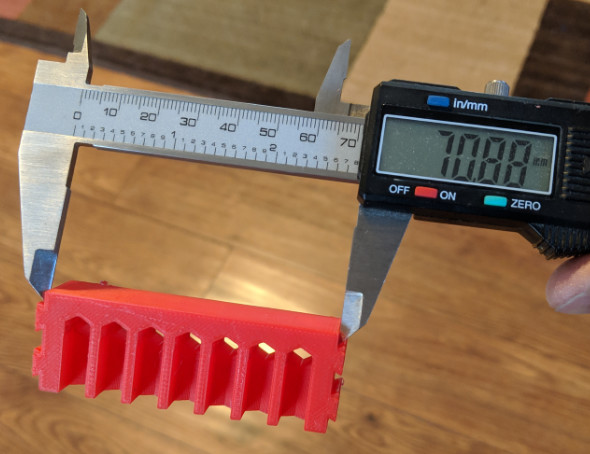 Digital calipers are indispensable for creating models, but there are times when you’ve printed a part and it doesn’t fit properly. If you know the exact dimensions, sometimes you can just scale the part in the 3D printing software without redesigning the part. 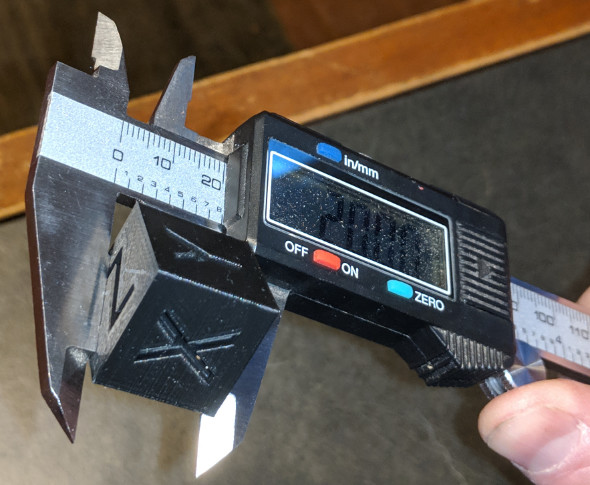 More importantly, if your want your prints to be dimensionally accurate, you need to print a calibration cube to test your printer. I use this one from Thingiverse.

If you discover that your printer isn’t accurate in one dimension, most printers have a way to adjust the calibration of each axis.

I’m not sure what brand these calipers are, but they are a $20 no-name imported pair I purchased on Amazon before they became garbage. It can be hard to find a cheap pair of calipers that doesn’t feel slide like a grader on a washboard road.

Related: Any Recommendations for Inexpensive Calipers?

Stuart’s Note: My vote would be for Mitutoyo, but they’re not exactly inexpensive. 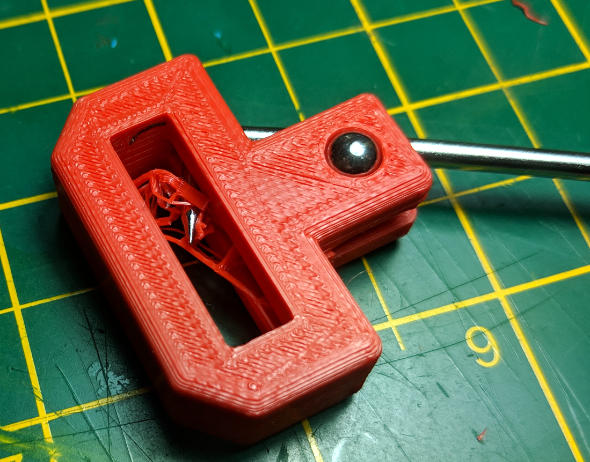 Hot filament can only bridge so far without being supported. Sometimes you need to add support structures to your object for it print right. If you have a multi head printer, you can use a water soluble filament and then just wash away the supports, but for the rest of us, we’re stuck having to dig out the support material. 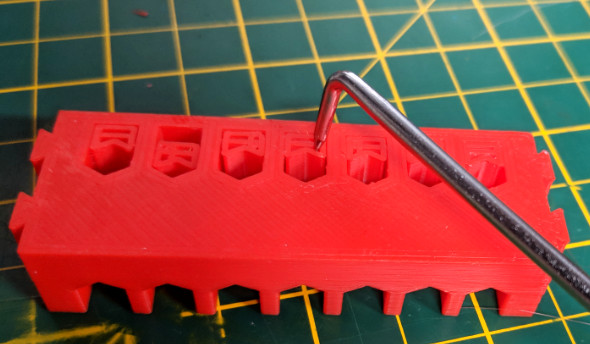 The best tool I’ve found for this task is a right angle pick. I had a Husky 4 pc pick set, but of those four, I bent  one pick, broke another, and melted a third. They would not be my first recommendation. Rather, I like the Milwaukee hook and pick set, as I haven’t managed to damage one yet. 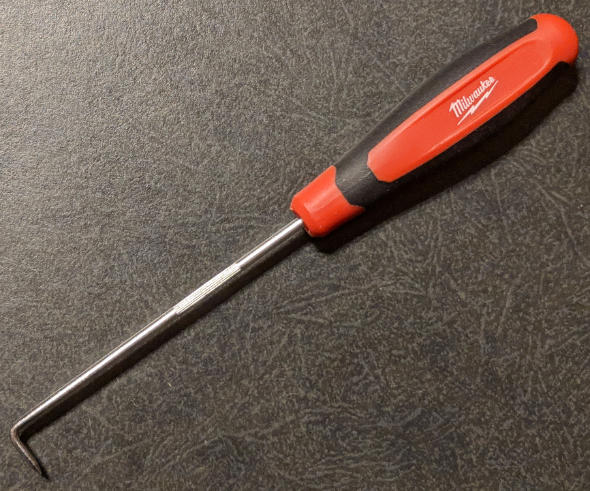 These aren’t carried at Home Depot Retail locations, but you can order the set online. Just make sure you ship them to a store near you to avoid shipping costs. Or, they ship free as part of a $45+ order. They’re also available at other Milwaukee tool dealers. There will be times you will need to press magnets, nuts, or other metal pieces into a finished plastic part. I’ve found that nothing works better than a Knipex Pliers Wrench. The parallel jaws keep the part and the insert piece aligned properly as you squeeze the handles. 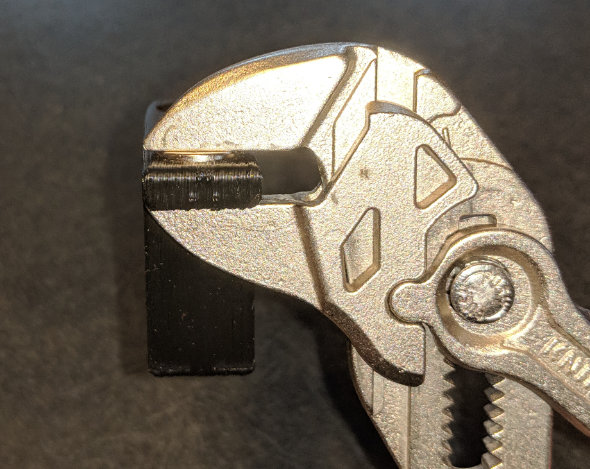 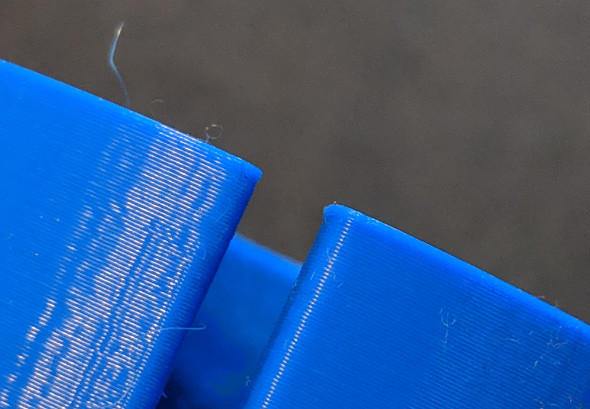 When printing a part, you usually print a thicker layer on the bottom so that it adheres better to the build surface. This leads to the bottom of the part sometimes being flared out a bit. For the longest time I’ve been using an X-Acto knife to trim off this extra plastic “flash.” 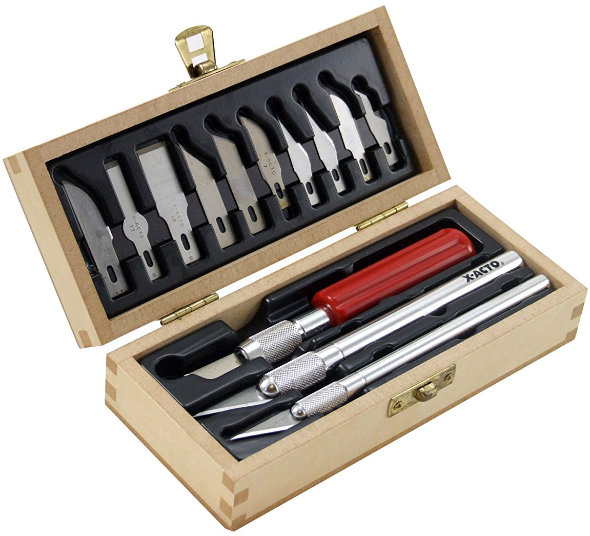 I purchased an X-Acto X5282 basic knife set many years ago, but honestly I only ever use the small knife and standard #11 blades.

I wouldn’t recommend going cheaper on either the blades or the knife. I’ve purchased a few substandard sets and have been completely disappointed, the knife doesn’t hold the blade well, and the blades are thinner and bendy.

Rather than buy a whole kit, I’d recommend starting out with this X-Acto #1 knife with 5 #11 blades for $8.

Stuart’s Note: Excel’s hobby knives are another good option. As of the time of this posting, their basic knife is $3.41 as an add-on item. 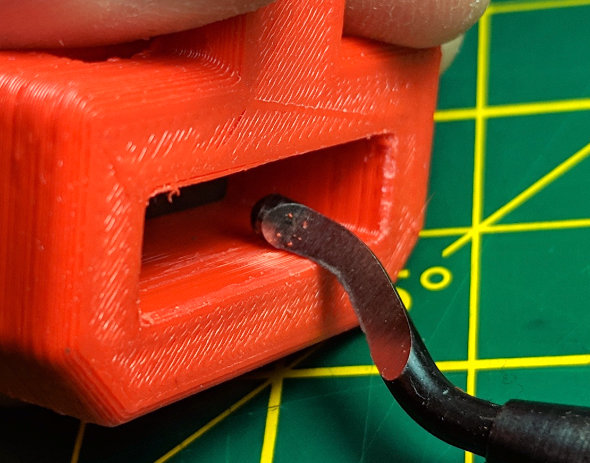 After some pokes and nicks with an X-Acto knife, I pulled out my deburring tool to try. I find it does a decent job removing the plastic flash on long straight edges or consistently curved edges. It’s much tougher to use on corners or nooks, so I still end up using an X-Acto knife.

The one I’ve been using is a General Tools 482 swivel head deburring tool with metal handle. It comes with two blades: a black one for use with steel, copper, aluminum, and plastic and a second one for cast iron and brass. I guess I lucked out and had the correct blade inserted in the tool, because I have no idea where the second one is.

You can pick one up at Amazon for about $13. 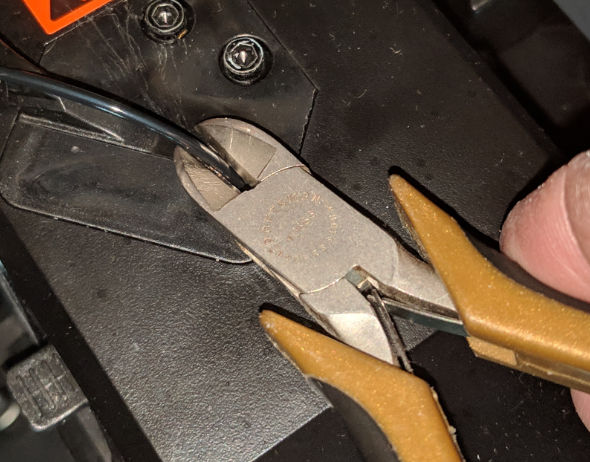 I’ve been using diagonal cutting pliers for cutting filament. I recently picked up a pair of FastCap micro flush cutting pliers on the recommendations of Ben @dusty.tools on Instagram. I’d been meaning to pick up a set to try out, and temporarily losing my go-to pair of side cutters finally gave me the reason I needed. 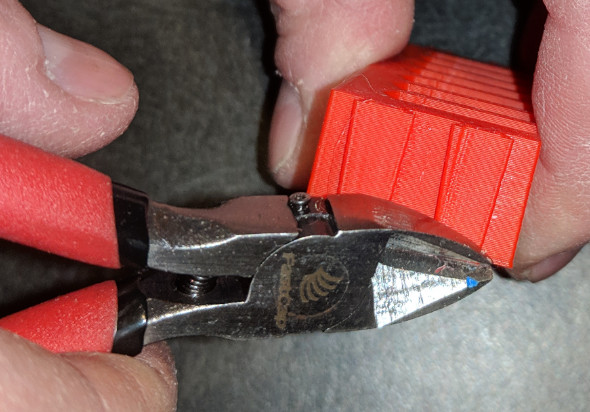 Besides cutting filament, these new micro flush-cutting pliers allow me to trim plastic flash off prints, further saving myself from X-Acto knife injuries.

The best place I could find to purchase these was at Home Depot. They don’t carry them in stock so I opted for ship-to-store. They cost me $11 plus tax. 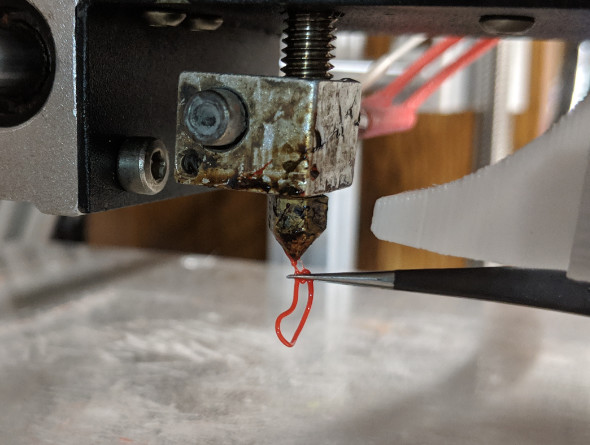 Finally, a pair of tweezers comes in handy for dealing with hot filament. There’s always excess filament that squeezes out of the hot end as the nozzle is heating up. I like to remove as much of this as possible before the printing starts, because it can get get dragged around by the print head or even get stuck in the print.

Sometimes the plastic starts sticking to the nozzle. This plastic will eventually turn black and start to smell. It can also fall off the nozzle and leave a glob of blackened plastic in the middle of your print.

I use tweezers to grab and remove the hot filament before it can cause any issues during a print.

I’ve been using some cheap Husky tweezers I purchased on clearance after Christmas one year. For this job just about any cheap pair of straight fine point tweezers will do. 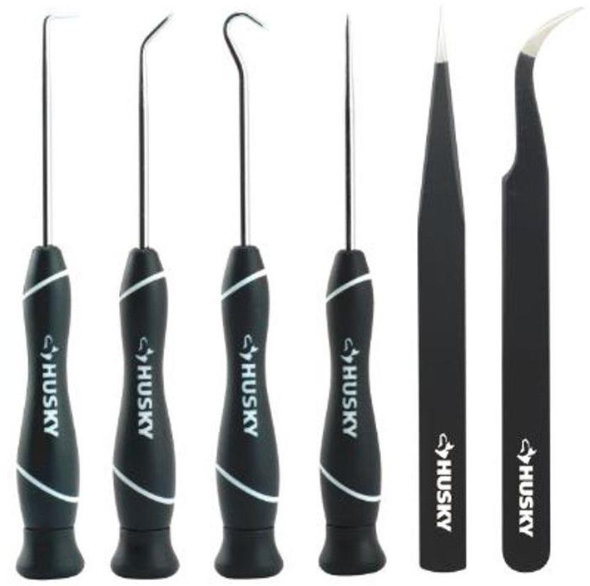 They don’t sell the Husky set I purchased anymore, but I believe the ones I use are in this Husky picks and tweezers tool set. As a bonus you get a right angle pick, but just remember that it’s easy to bend the Husky picks.

Did I miss any tools? Or do you have favorite 3D printing tools that work better? Let us know in the comments.