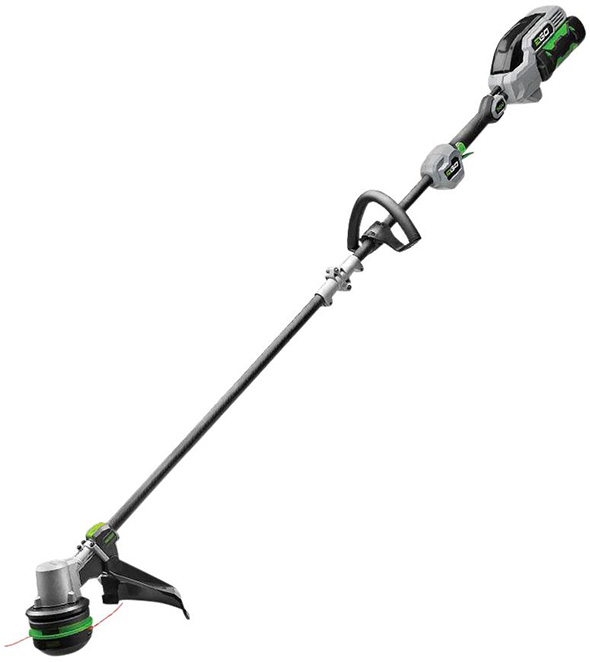 Did you know that EGO makes a 56V cordless string trimmer with carbon fiber shaft? EGO had sent us a new cordless trimmer (ST1520S) over the summer, but allergies and a heavy workload kept me from testing it sooner. I put two hours in with the new trimmer, and learned a few things about it.

Why buy THIS model? EGO offers a couple of different cordless 15″ string trimmers. The main selling points of this model are the Powerload line reload feature and the carbon fiber shaft. You could do without them, but personally I am really liking the auto-winding head. Having experienced it, I’d pay the premium for this feature.

To start off, let me tell you how I tested it. We had some trees removed last winter, and a whole lot of tall weeds and grasses popped up in those areas that wrap around the perimeter of our property. Yesterday it was time to start battling the overgrowth. These areas grow some weeds every year, but I’m guessing the reduced shade really let them grow wild and fast.

I had only cleared out maybe 20% of the overgrowth, and so there will be plenty of more testing opportunities in the next week or two.

Most of the tall grasses and weeds were between live trees, and some were right up to the trunks. There were also some obstructions, such as large rocks and a 4×4 or two that I guess diverts some rainwater to a shared drain slightly downhill. So, most of the use so far was done in open areas, but I also had to do some edging and trimming around barriers and trees.

Assembly was a cinch. I had a little trouble until I flexed the joint against a workbench and the holes lined up perfectly. The trimmer arrives folded up in a half-height box. To set it up, you close the hinged joint and fasten the two ends of the shaft together with a single screw. Then, it’s quick to attach the guard and front handle.

EGO preloads the trimmer and includes a second pre-cut replacement line. Replacement line is easily available. I bought a 5-pack of pre-cut 14-foot twisted 0.095″ line at Home Depot and also have a pack of 160 ft uncut line on the way from Amazon. 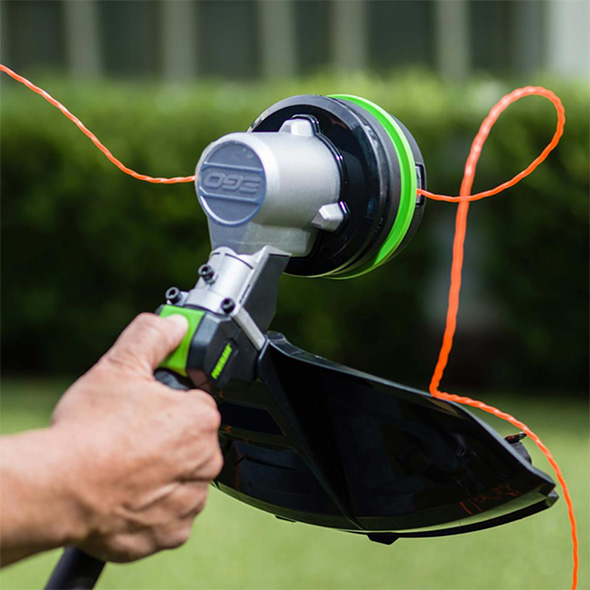 Trimmer Reloading is easy. You load it through the trimmer head mid-way, and then press a button near the head to wind it up.

There was an instance where somehow the line was broken and retracted inside the head, and so I had the chance to test the clearing process should you wind up the line too far and into the head. Removing the cap wasn’t effortless, but maybe it’ll be easier the second time around now that I know exactly how to push the tabs in.

Advancing the Line is done by bumping the head down. It’s quick and easy.

The Carbon Fiber Shaft is described as being stronger than any other string trimmer shaft on the market today. When I went to Home Depot to pick up a 5-pack of replacement line, I saw an Echo cordless string trimmer with a bent metal shaft. EGO says the carbon fiber shaft has a lifetime warranty, guaranteeing its strength and durability forever.

Carbon fiber also damps vibrations better than other materials, and so I wonder if it has anti-vibration benefits here.

During Testing, I didn’t make much use of the variable speed control. I went at the overgrowth at full power. After some time I started trimming the taller weeds and grass from the top down, and then clearing them out from the side.

I somehow went through both of the included pre-cut lines, and more than 3x 5.0Ah battery charges. I have three 5.0Ah batteries from an EGO cordless snow blower review sample and other past samples, I cycled through all three batteries. I *believe* they were fully charged, or at least nearly. In the maybe 2 to 2-1/2 hours I was out there, I had depleted three batteries in a row and then taken the first one off the charger I had out. I was on my fourth 5.0Ah battery charge when I ran out of line.

The testing conditions were very aggressive and very demanding. It’d be better if I could rent a brush cutter or mower, but the EGO 15″ trimmer worked well and even better than I had expected. I have not cleared an area this large with a string trimmer before.

The trimmer was also easy to control around trees.

If it can handle this, it’ll work just fine for lighter trimming tasks.

I’ve been a fan of EGO cordless power tools, and this one is no different. I might have opted for the straight shaft version if I were purchasing the tool, but the split shaft version is less expensive and could potentially be folded back up for seasonal storage.

I jammed the motor a couple of times, and it started right back up each time. I’d say that I abused the tool, and kept it running nearly continuously for a little over two hours. My three 5.0Ah batteries could have kept me going for even longer, but I ran out of line.

The runtime was actually impressive given how I was using the trimmer to cut thick tall grass and thicker-stemmed weeds that I had no business using a string trimmer on. I think that the 2.5Ah battery included in the kits would power the trimmer through at least several quick maintenance-trimming sessions.

I might try it with a 2.5Ah battery, but I don’t think there will be much benefit to ergonomics or weight. Buying into EGO’s 56V cordless outdoor power system is easier on the wallet if you go with the 2.5Ah kit. But if you already have a charger and 5.0Ah battery, the bare tool is a good option.

The controls were easy and comfortable. I wished at one point the handle had tool-free adjustments, but a minute with a hex key before the next session is all that will be needed to dial it in for my preferences. Tool-free adjustments sometimes loosen up over time and can be a hassle to retighten, and so long-term the 4-screw shaft clamp will work just fine.

I liked how easy it was to load the line, and the bump advance is of course a convenience.

Less expensive and lower powered string trimmers are limited to 0.065″ or 0.080″ lines and usually have shorter cutting swaths. The 15″ cutting swath and heavier 0.095″ twisted line was definitely appreciated. I don’t think a lighter duty trimmer could have handled what I pushed this EGO through.

I went through line way too quickly, but that shouldn’t happen in normal use. During less aggressive clearing or trimming projects, the same line should last a lot longer.

As of now, I’m pretty sold on this EGO cordless string trimmer. It handled everything I threw at it yesterday, and if it can handle itself the same way as I work to clear the rest of the overgrown area, I don’t see any way things could be better.

Next time I’ll try for “before and after” photos. When I started the cleanup process yesterday, I wasn’t convinced that the trimmer would actually be suitable. I thought I’d have to give up on the overgrowth cleanup and then do some regular maintenance-style trimming tasks for testing purposes. But the trimmer was making good progress, and before I knew it I had reduced the overgrowth to winter ground cover.

Thank you to EGO for providing the review sample.