ToolGuyd > Tool Reviews > Fiskars Telescoping Pruner Review: It Broke on the Second Use
If you buy something through our links, ToolGuyd might earn an affiliate commission. 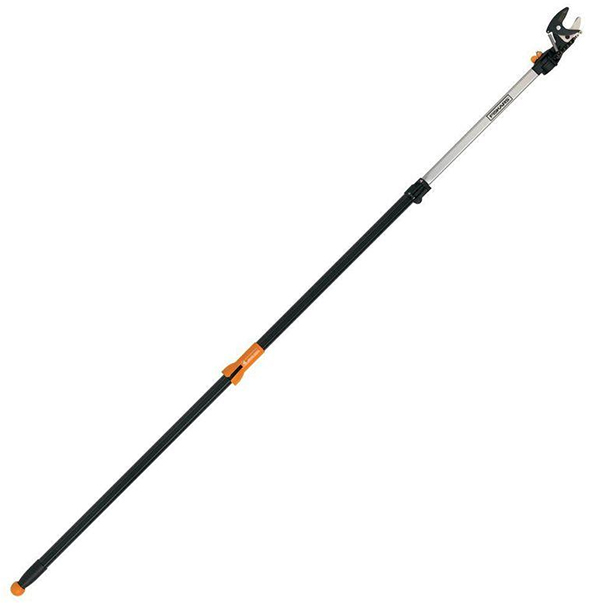 I needed a pruning stick for cutting thick brush branches several feet out of reach, and for problematic tree branches.

I went with the Fiskars 12-foot telescoping pruning stick, which features a pivoting head, easy-pull sliding handle mechanism, a pruning head, and a curved saw head.

To use it, you simply brace the back of the stick, or hold the rear handle if only cutting smaller branches, and pull back on the sliding orange handle.

It broke it the second time I used it!

The first time I used it, I made maybe 25 cuts in branches 1/4″ to 3/4″ thick. Maybe there were a few 1″ cuts in there. Yesterday, the second time I brought it out, I made about the same number of cuts in smaller branches, and then tried to cut a branch maybe 1″ thick.

Looking at some of the reviews at Home Depot, there are very many numerous complaints about its quality,

I was trying to cut a thick branch that I thought was well within its cutting capacity. Maybe I was wrong? The capacity for a smaller Fiskars pole pruner is said to be 1-1/4″.

As I was pulling the handle to make the cut, I had a weird gear-slipping-like sound and the head locked up and got stuck around the branch.

I eventually got it free, took the pruner inside, and disassembled the head. After spending some time understanding the internals, which weren’t all that complicated, I reassembled it and tried to get it to work. After the third time, everything seemed right.

One test on a maybe 3/8″ thick branch and it locked up again.

I’m going back to Home Depot later today, either for a replacement, or a refund and I’ll pick out a non-telescoping pole pruner that has a more robust mechanism.

What I don’t understand is that there’s a Fiskars 54″ tree pruner that looks to have an identical cutter head mechanism, but it has overwhelmingly positive reviews. Maybe I’ll try that one next. Or maybe the issue I experienced with the telescoping pruner is a random and unique failure.

A lot of the complaints about the model I tried are about its flimsy handle. It’s pretty sturdy when not extended, but when it is extended, there is considerable flex in the mechanism. I can understand the reasoning behind it – you can’t have a traditional telescoping mechanism and ropeless design, at least not easily or inexpensively from what I can see.

I really liked the ropeless convenience of this model, until it failed.

What I’ll try next:

Can you recommend a pole pruner – not a saw – at least 6 feet long?

A Quick Review of the Milwaukee M18 Fuel Hedge Trimmer