ToolGuyd > Power Tools > Cordless > New Flir ONE Thermal Imaging Camera for iPhones
If you buy something through our links, ToolGuyd might earn an affiliate commission. 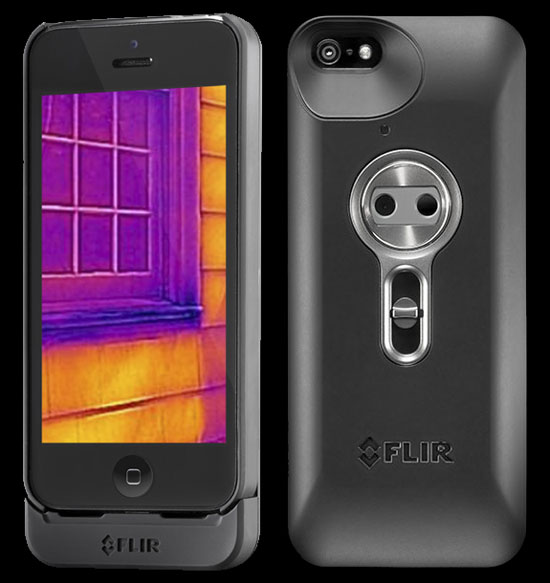 Flir is soon coming out their new Flir ONE, a thermal imaging camera that attaches to the Apple iPhone 5 and 5S. The Flir ONE is built around the new ultra-compact and inexpensive Lepton core, which was designed for consumer applications, and makes use of the iPhone’s screen and Flir ONE iOS app for image display and processing.

So even if the thermal resolution is somewhat on the low side, the ONE should still produce reasonably clear images.

The Flir ONE will have its own battery power source and a VGA visual camera that is used for MSX blending and thermal image enhancement. Users will be able to capture both still and video images on their iPhones.

Models that will work with “select Android smartphones” are currently in the works.

The Flir ONE will be available in three colors – “space grey,” white, and gold, so that users can match their Flir ONEs to the colors of their iPhones. (No, this is not a joke.)

Thank you to Michael for the heads-up!

This seems like a great idea, by why is Flir being so cryptic about the thermal image resolution of the Lepton core?

Speaking as an Android smartphone user, it’s disappointing that the Flir ONE is only compatible with the latest iPhone models. I hope that Flir plans to release an iPod Touch model, as well as maybe a universal module that works with a wider selection of Android phones that satisfy minimum technical specification requirements.

The potential for something like this seem endless, especially at a ~$350 price point.

I would also like to see a USB-friendly module that works with Windows and maybe even Mac OSX.

Flir seems to have designed the ONE for social media sharing and general personal use applications, but it should be capable enough to be handy for tradesmen, contractors, and other professional tool users as well, at least as an entry-level product.