ToolGuyd > DIY & Home > Garage Workshop Upgrades?
If you buy something through our links, ToolGuyd might earn an affiliate commission. 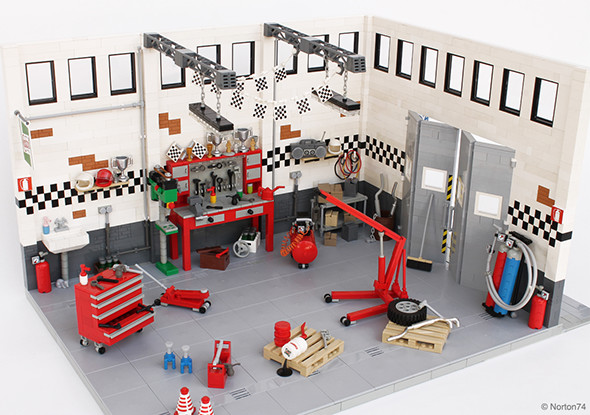 We will soon be upgrading our workshop, a position a lot of DIYers, hobbyists, and pros find themselves in.

While I have made up my mind about a few things, I figured we could all throw in ideas for inspiration.

Plywood Wall Sheathing? I’ve seen a lot of OSB-lined walls on YouTube, and the benefit is that you can fasten anything to anywhere, and not necessarily just over a stud. Plywood was recommended to me, and I think that’s the direction I’ll go in, painted white or light gray, with thin wood strips over the seams.

I’m not 100% convinced about this, but I don’t have a good argument against it.

Electrical Subpanel. We need more outlets, and it makes sense to install a subpanel rather than bringing in more lines from the main breaker panel in the house. Let’s say I want an air compressor in the corner, or a 220V table saw. A subpanel will make future upgrades and installations a lot easier.

Belt-Driven Garage Door Openers. We’ll be getting new doors – 7-footers rather than the 6-foot something’s from years ago, and with them new openers. This will be a great time to test out the Ryobi garage door opener and accessory system. For the other door, I was thinking of maybe a Chamberlain.

Mini Split for Heating and Cooling. It seems that a mini split will be a lot better than a window or portable AC and ceiling-mounted electric heater.

How Would You, or Did You, Upgrade Your Garage Workspace?

In my dream workspace, I’d have a Tardis, so that I could have unlimited storage space with a teeny tiny footprint the size of a small closet. But that’s fantasy, this is reality. Realistically, insulated walls, heated and cooling, flexible electric, quieter openers, and plywood instead of drywall seem to be the best I can think of.

Oh, and high-powered Big Ass LED lights. But that’s just a plug-and-play upgrade. They recommended 2, which they sent over for testing and review, but I think I might want to go with a 3-light setup.