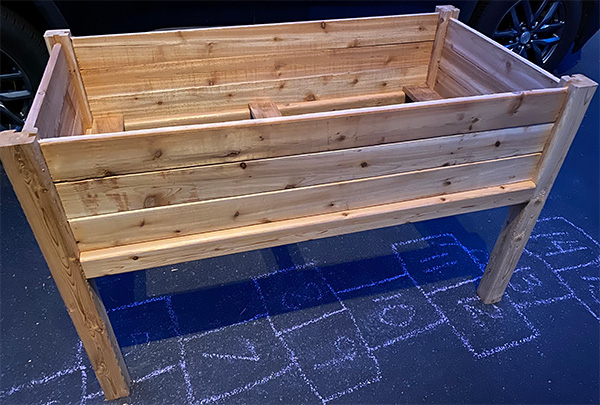 As you might have read in my other posts, I’ll be trying to grow veggies this year and wanted cedar planter boxes to grow them in. I’ll have a few buckets and plastic pots as well, but needed something larger and cedar planters seem perfect and versatile.

I have a backyard, but there are reasons I can’t/won’t plant directly in the ground just yet, or even in a raised garden bed. The biggest reason is that I want a movable planter box for flexibility and so that I don’t have to stress about placement or any fixed irrigation or watering setup.

Simply put, I feel that pots and planter boxes will be easier for me.

I plan to build a planter box out of cedar lumber, and also some stands for my pots and buckets.

I came across this Greenes elevated garden bed when I started my online-shopping for supplies, and it seemed like a good idea. I figured that I’d buy this 2′ x 4′ elevated planter kit and it’ll serve as a good baseline.

I ordered my Greenes cedar planter box from Gardener’s Supply for $127.50 after coupon. It arrived directly from Greenes Fence Co. The box looked a little rough and was missing 2 top caps and the screws to secure them. (I contacted Greenes’ and the replacement parts are said to be on the way.) 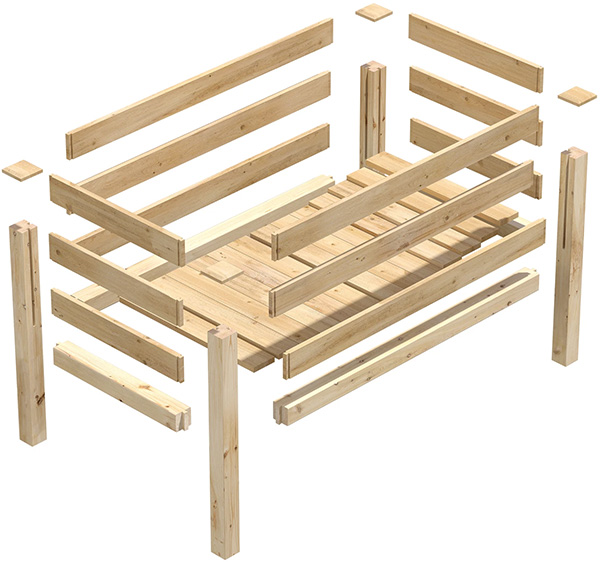 I actually hadn’t intended to assemble it so quickly, but Home Depot had this planter on sale on 4/2/20, and maybe I’d like it so much I’d want another? I pounded it together, was pleased with the assembly, and ran to a computer to order a second planter from Home Depot for $109 plus tax.

What you see above is the mostly-assembled second planter box, with the top caps and most bottom platform boards not yet in place. The planter also comes with a fabric insert.

This box also arrived directly from Greenes, and quite fast too.

As with the first planter box, only a rubber mallet was needed for assembly, although this unit required more elbow grease to put together. It seems that maybe one of the legs is warped, or one of the horizontal supports too long, because that side was tough to assemble, requiring me to squeeze two legs together in order to get the panels to slide in.

Maybe the leg shifted when the dovetail groove was being cut, to where the sliding dovetail angle is slightly off, and that’s why the leg spreads outwards a bit at the top,

That second unit was also wobbly on level ground. I pounded the sides down with the rubber mallet and put some body weight on the posts, and it seemed to adjust itself.

I’m surprised that the assembly experience was so different between the first and second cedar planter box kits. If I had received the second unit before the first, I probably wouldn’t have purchased any more. I guess some variability in the user experience is to be expected.

I can’t pinpoint a defect, and so I won’t be reaching out to Greenes for advice or potential replacement parts. Besides, what would the desired resolution be? A replacement leg and cross-brace? That doesn’t seem necessary to me.

The instructions sheet for the second unit were laid out in a more simplified manner, unlike the more formal-looking instructions I received with the first unit, but I don’t know what this means. There were no other differences I could tell between this kit and the first one, to indicate that the product sold by Home Depot was any better or lesser than the one I ordered from Gardener’s.

Greenes uses sliding dovetails for assembly, and it seems fairly strong. Still, for peace of mind, I might reinforce the corners with metal brackets, or something similar. Maybe aluminum angles across the bottom? That second unit has me a little hesitant, knowing that one of the sides is under stress.

(Perhaps something like galvanized steel brackets like this one from McMaster could work for just-in-case reinforcement, but would it impede any wood movement?)

I didn’t expect the shipment from Home Depot to arrive so quickly, and so I didn’t make room for the box. It was a nice evening and so I assembled it quickly while there was still light out.

It’s of course too early to tell how things will work out. Right now, I plan for one planter to be used unmodified, and the other might be used as a wicking planter. For the wicking/sub-irrigated planter (SIP), I’d install a rubber pond liner, self-drainage piping, and small drain and fill pipes, and will see how that goes.

I’m not quite sure yet if I’ll make this into a SIP planter box. Stock, the planter box measures 24″ x 48″ x 31″, with the internal garden bed measuring 23.75″ x 47″ x 9.6″. With a traditional SIP planter design, you have your perforated water container lining most of the bottom layer. In this case, though, taking 4″ off the 9.6″ depth is not a good idea given that I want to grow veggies in this box.

By veggies, I mean mostly hot peppers and pickling cucumbers, but I’m going to also try for carrots, dill, basil, and some flowers as deer deterrents.

A nearly 10″ planting depth would work well for most of my ideas. So, what I might do is only place a couple of perforated drainage tubes in the base, rather than nearly full-width, so that there’s still space for deeper roots to grow if needed.

Or, maybe I’ll use the second stand to hold a couple of bucket planters or grow bags, but that’s only if my desire to experiment lessens over the course of the next month.

Another idea for experimentation purposes would be for me to bury two terracotta watering pots (an olla), which would take up lateral space in the planter box, but not any of its depth. Ollas are basically wicking watering reservoirs that hydrate the soil or potting mix around them. Small ones are said to have up to 24″ watering circles. I have two on order, intended for large grow bags, but I can’t get more since the two brands I’m looking at are sold out everywhere.

Why am I so focused on watering solutions right now? Two years ago I planted sunflowers in large 18″ or 20″ pots, and I couldn’t water them enough in the summer. There were times I had to water them twice a day. I’ll have more plants to water this season, and am very eager for solutions that either let me go longer between waterings or provide greater stability and consistent moisture for the plants.

If or when I have a raised garden or designated garden area, I can work out a drip irrigation system or similar. But right now, I’m looking at manual watering and wicking/self-watering/sub-irrigated methods.

As for the cedar planter, I think what I received is at least fair for the price. Greenes also offers a “premium” version, with thicker boards and each side panels is made up of 2 boards instead of 3. But, I hope to be making my own fancier-looking planters this year (and hopefully next year as well), and so I’m fine going with the more economical version.

My short but satisfactory assembly of the first one prompted me to buy a second at Home Depot’s deal of the day pricing. $109 including shipping seemed too good to pass up. I’m a little hesitant about the build quality of the second planter, and so what I might do is load it up and see how it handles over the next month before the last frost and I can set up any plants.

Long story short, I think these planter boxes are worth recommending. I expect to get a few seasons out of them, either on the driveway or on deck.