ToolGuyd > Power Tools > Cordless > Reader Question: Which Heavy Duty Cordless Reciprocating Saw for Demolition Work?
If you buy something through our links, ToolGuyd might earn an affiliate commission. 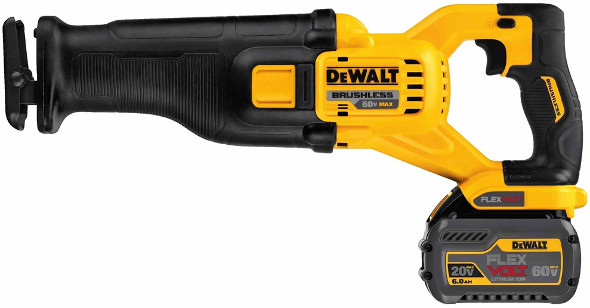 We recently received a tough question, and it’s one I just don’t know the answer to. Which cordless reciprocating saw is best for real-world all-day demo work?

Dewalt FlexVolt? Milwaukee M18 Fuel? Hilti? Is there another cordless brand or saw that’s worth considering?

I am in real world 10 and 12 hour construction demolition. I needed a heavy duty cordless reciprocating saw that can last. Milwaukee M18 Fuel or Dewalt 60V FlexVolt? I went with the DeWalt 60V FlexVolt.

It was $400.00 for the tool kit, including (2) 60V FlexVolt batteries, charger and carrying bag. These heavy duty recip saws with heavy duty blades cutting through pipe, wood and nails last… 20-25 MINUTES ! We need something for A FULL day of demo.

My guys had (4) FULL sets of these saws! A DeWalt rep. confirms SHORT run times. You would need about (20) fully charged 60V FlexVolt batteries to make it through one shift of demo work! (It’s $ 180.00 for a set of batteries!)

There’s a lot we don’t know, but here is what we do. L.K.’s team has 4 full sets of FlexVolt reciprocating saws, and the runtime isn’t as long as they’d like.

Is there something better out there?

Dewalt’s 9.0Ah batteries have hit the market, which will provide roughly 50% greater runtime, possibly a little more since they’re not an apples-to-apples bump up in capacity. The 9.0Ah battery packs have different battery cells – larger cells – and in theory so they’re capable of being run a little harder.

But that would mean going from say 25 minutes to around 38 minutes of runtime. A team of users would still need several sets of battery packs to go through charging and usage cycles each day.

Following is a quick intro to the Dewalt FlexVolt reciprocating saw. This was at last year’s Dewalt new tool media event, where they introduced the FlexVolt line to the world.

Here are some takeaways:

There’s a dilemma here. This is one powerful saw. Are you willing to trade power for runtime, if that was even an option?

In addition to the Dewalt FlexVolt and Milwaukee M18 Fuel options, I suppose the Makita 18V X2 model ($188 for bare tool via Amazon) is another potential option. Let’s pretend for a moment that the X2 saw can give you a little more runtime than the FlexVolt saw. It’s at least possible. But then you have 2 batteries to deal with, and 2 more to retrieve from chargers.

I don’t know enough about Hilti’s saws to comment on them, but I think the same problem would crop up – more power plus heavy duty cutting means faster drain on a battery pack.

My first instinct, other than to ask whether corded saws are an option, is to look at the reciprocating saw blades. How often are they changed out? Are the users working with dull blades?

Even with good blades, tough work will become tougher when the teeth wear down. I’ve seen some stubborn contractors who will work blades until the teeth are round wood-burning nubs.

When the time of cut goes from 30 seconds to 4 minutes, the workpiece has turned black, and the smell of burnt wood fills the air, it’s time to change blades.

Maybe changing blades more often will help, but that might add its own inconveniences, not to mention expenses. The benefits might not even be very noticeable or significant if the users try to be mindful of changing blades when needed.

Other than that, I have no clue what to suggest to someone who does more demo work in a day than I do in a year.

What would you recommend to someone who has been using a Dewalt FlexVolt reciprocating saw and returns to the charger every half hour?

Where Can You Buy a Dado Throat Plate for Milwaukee’s M18 Fuel Cordless Table Saw?