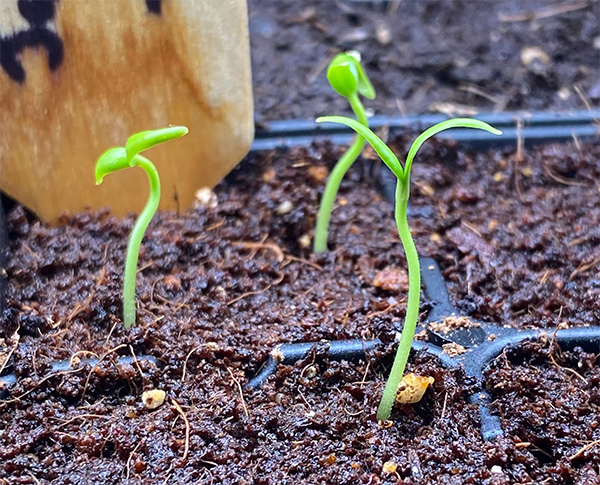 As mentioned in last week’s post, I will be starting a small container veggie garden this year. Some of you are experts at this, others beginners like myself, and so I thought it would be interesting for me to show you my progress so far.

My plans call for starting some plants indoors for 3-8 weeks, with hot peppers requiring the longest grow period.

I had a late start due to seed company fulfillment delays, but it is what it is.

With some plants requiring a much lengthier start indoors, I saw an opportunity to learn a bit via trial and error before it’s time to start my cucumber plants, which will be quite soon now.

I have done extensive research online, but there’s no substitute for trial and error.

There are plenty of “recipes” for creating your own starter mix, but 1) I don’t need large volumes of seed-starting mix, 2) I couldn’t settle on any single recipe idea as being right for me, and 3) due to the COVID-19 situation, it’s not exactly a good time to visit different home centers and garden centers to amass the needed supplies and ingredients.

So, I ordered some seed starting mixes online, based on what was available to ship. I started with two bags of mix from one supplier I ordered from in mid-March, realized I needed more, and then worked to find seed starting mix from brands I recognized, and from retailers that charged fair shipping. 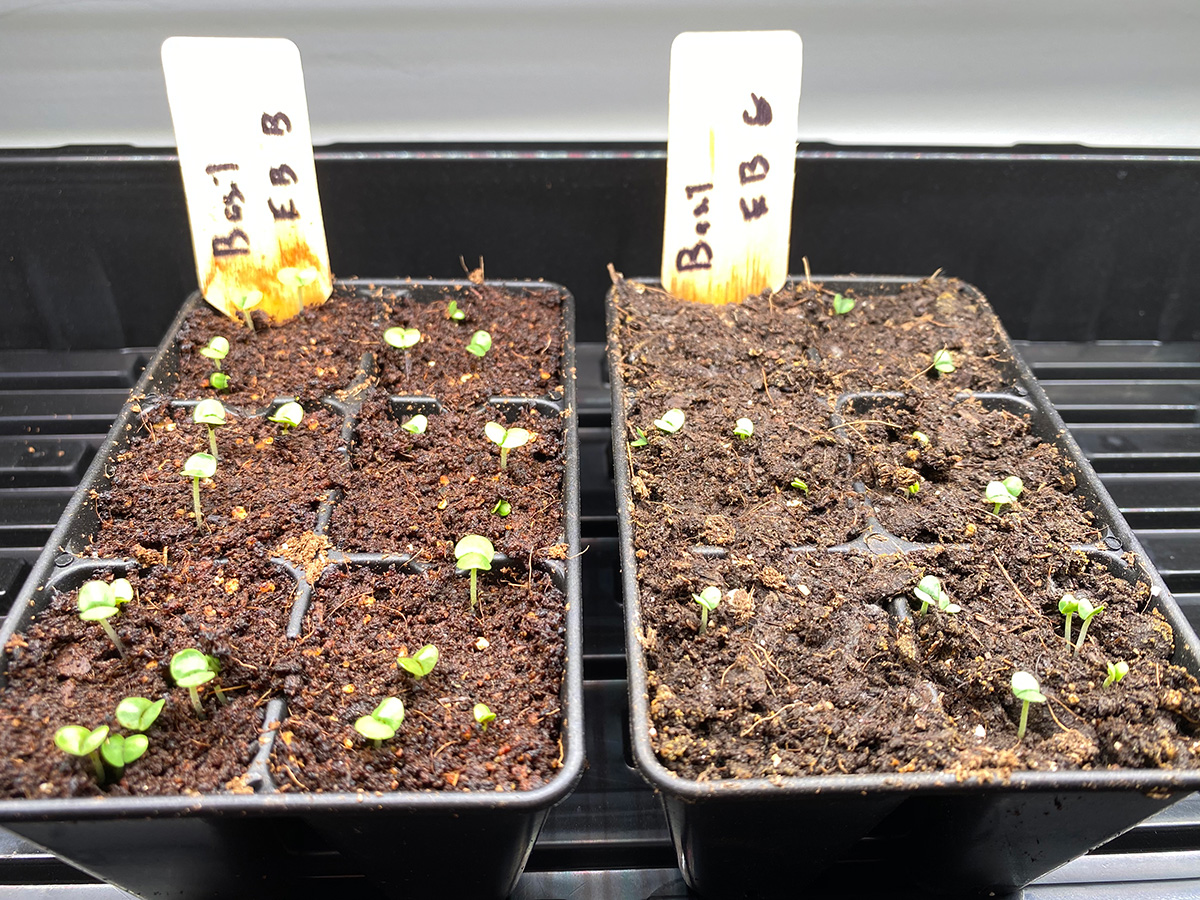 My first batch of seeds arrived the first week in April. I sowed basil, marigolds, jalapeno peppers, and habanero peppers on April 4th.

Shown above are the sprouted basil seedlings after 4 days.

The Gardener’s mix is terrible to work with. It has some wood chips, occasional long twigs, even some stones. Their website says it contains Bio-Blended Compost (composted manures and plant materials), sphagnum peat moss, perlite, mineral and nutrient amendments.

I didn’t notice the composted manures and plant materials part before ordering and using it. Usually plant materials or forest matter as some brands describe similar components, is chunky.

The Burpee mix is made from 95% coconut fiber, perlite, and fertilizer.

Looking now at the bag, it says to add fertilizer after 2 weeks of growth.

I do have some water-soluble seedling fertilizer, and I bought worm castings which I planned to mix into the potting-up transplant mix.

But oh boy, I should have added fertilizer earlier on.

In my research, I kept seeing the following repeated: “seedlings don’t need fertilizer.” I’d read and watch that seedlings didn’t need to be fertilized until transplanted, or until “x-number of true leaf pairs” appeared.

Well… thanks to these early experiments, I can see that some seedling mixes aren’t as nutrient-rich as others.

Yes, I know that seedling mix is largely lifeless, lacking the nutrients found in potting mix or garden soil. But seeing the difference is very eye-opening.

Shown here again are the basil seedlings after 4 days. The germination rate for seeds in the Burpee mix (left) is a lot greater than those in the denser and coarser Gardener’s mix (right). Based on this, I told myself that the Burpee mix was better, and I tried my best to source other mixes like it.

My cucumbers will be started in larger 4″ pots, and so I’ll need a bit more mix even. Over the course of the following week, I also ordered Jiffy and Espoma seed starting mixes.

One week later, things were different. I started seeing the differences sooner, but the images aren’t quite as presentable. After a couple of days I noticed that the basil seedlings in the Gardener’s mix were a little ahead in starting their first pair or true leaves.

Here, at the 11 day mark, you can see that the basil seedlings in Gardener’s mix (left) are much greener and larger than those in the Burpee mix.

If you scroll back up to see the Day 4 example, the seedlings in the Burpee’s mix are a little ahead of those in the Gardener’s mix, but this is certainly not the case by Day 11.

The Burpee mix is said to have some fertilizer mixed in, but clearly it’s not as much or as potent as the composted manures and plant materials in the Gardener’s mix.

Here we are, at 14 days. The basil seedlings in the Gardener’s mix are doing great, with large true leaves, and you can see the second pair starting to form in at least one of the seedlings.

On the left, the basil seedlings in the Burpee mix, they are basically stunted.

I thought at first that their shade of yellow-green was due to overwatering, but no, it seems that a lack of nutrients is the cause here.

I’m probably going to have to thin back the grown in the Gardener’s mix and add liquid fertilizer to the seedlings in the Burpee mix.

There’s a ground-side view of the same basil seedlings.

Shown here are jalapeno seedlings after 11 days. There’s greater growth in the Gardener’s mix (left) than in the Burpee mix (right).

I should point out that germination appeared to have been more difficult in the Gardener’s mix, but that seems unimportant given the seedlings’ stronger growth after sprouting.

My first batch of hot pepper seedlings aren’t as populous as the second batch. This could be due to the age or quality of the seeds, as I used different suppliers, or because I was too heavy on the water when moistening the seed starting mix prior to use.

Both the Gardener’s and Burpee mixes were somewhat hydrated out of the bag, requiring only some water to prep for seed sowing. This is important to note because the later mixes I purchased, Jiffy and Espoma branded, are dryer and a lot fluffier, requiring more work and difficulty to moisten, and because a quart of wetter mix gives you more than a less dense quart of bone-dry mix.

Here are the vanilla marigolds after 11 days. Gardener’s organic steed starting mix is on the left, and Burpee’s is on the right.

I did add some liquid seedling fertilizer to one cell in the Burpee’s mix – 4 mL of the as-directed dilution ratio. I’ll be adding more, probably on a once-a-week basis to start, keeping one or two seedlings untreated for comparison purposes. Or, maybe I should dilute it further and apply twice a week. So far, that one application doesn’t seem to have made any difference.

What I’m seeing here and with the basil seedlings is that they thrive with the added nutrients.

I started my last batch of hot pepper seedlings last night a few hours after the packet arrived, and hope to compare the growth nature of all 4 brands of seedling mix I’ve been trying. I have more experiments to try, but I think it’s clear – seedlings definitely need nutrients, and sooner than others and even the brands themselves recommend.

There’s a limit as to what can be added to seedlings started indoors. I have finer worm castings that I could try mixing into the seed starting mix, or I can see how well the water-soluble fertilizer works.

I’m leaning towards assuming that the worm castings, or other in-mix fertilizer, will work better than water-soluble applications.

Or, I can stick with the Gardener’s organic mix in the future, but it’s not without its problems. I had to replace some wood label markers due to mold growth, and the wood bits in the mix seemed prone to grow white fuzzy mold.

To get things started, I have a heat mat and a humidity dome, with the 6-cell seed trays removed from both once an acceptable number of seeds have sprouted. I have also been using growing lights – one kind over the humidity domes, and another for the seedlings as shown here.

Here’s another angle showing the vanilla marigolds. It’s crazy how much of a difference the seed starting mix makes.

Right now, I’m on a race to get the hot pepper seeds ready for transplanting outside in 4-6 weeks. The ones I just planted yesterday won’t get to enjoy the full 8 weeks of recommended growth before heading outside.

I’m going to have to figure out a fertilizer regiment, and fast.

Here are the 4 trays that I started yesterday, all with sugar rush peach hot pepper seeds. I used the whole packet, since there won’t be time to start any more plants later than now. I can always order more seeds for next year, and I probably will if things work out well.

From left to right:

As mentiomed, the Jiffy and Espoma mixes were very dry out of the bag, and I have found them to be more difficult to work with. With the Gardener’s and Burpee mixes, I can add a little for them to be moist, or a lot for them to be damper. My first sowings were a little too damp, and with the second batch I was more conservative, working with less water.

With the Jiffy and Espoma mixes, I can’t get as good a consistency – even if I mix everything well and add just enough water to hydrate the dry mix, it ends up wet and spongy. This will likely require some “trial and error” for me to get right, although that depends on how germination and growth progresses.

Another bucket of carrot seeds are going outside today, but I’m not experimenting much there – for now. I’ve been tempted to sacrifice a plant from each tray to see if there’s a difference in root growth. My initial thoughts about maybe the basil being overwatered due to the type of mix have been invalidated. The mix on the left simply has more nutrients to facilitate growth, via “Bio-Blended Compost,” while on the right, the “fertilizer” obviously hasn’t done much.

Note: A lot of these supplies are no longer available via Amazon or other retailers, but at least the links will show you what the packaging looks like.

I ordered all of the seed-starting supplies from Amazon, except the Bootstrap Farmer supplies, which I ordered from their website directly.

Seed suppliers are absolutely inundated with orders, partly because this is their busiest time of year, but also because of the COVID-19 pandemic, social distancing for workers’ safety, and much-heightened customer demand.

Different suppliers carry different varieties, and so I had to split my orders among different suppliers. Once I realized I might not be able to receive and start plants by seed on top, and not knowing whether I’d be able top shop at the local garden center or what they’ve have, I also ordered live plants for transplanting from Territorial Seed and Burpee.

Tell us About Your Garden Plans for 2020

Leave a Reply to A W Cancel reply