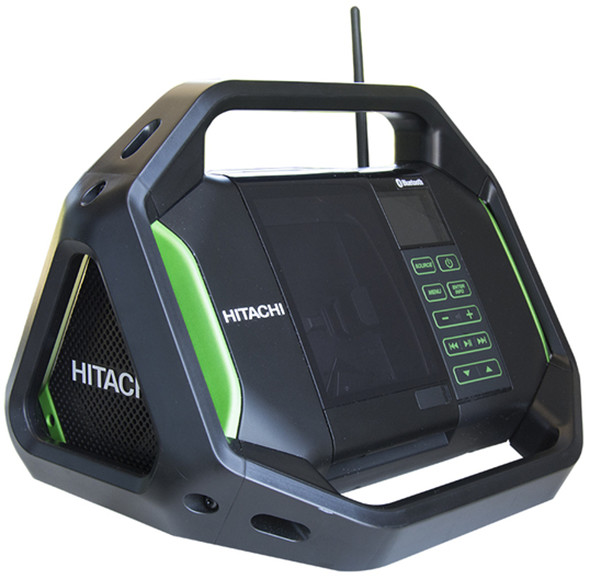 Hitachi’s newest 18V Bluetooth jobsite radio, model UR18DSALP4, has just come out, and it looks great. Well… maybe not at first. At first glance, it looks a little unusual. Each power tool brand’s jobsite radio or speaker looks different from the next, but I don’t think I’ve seen a triangular jobsite radio before.

But with a closer look, the thoughtfulness behind the new Hitachi radio starts to show through. 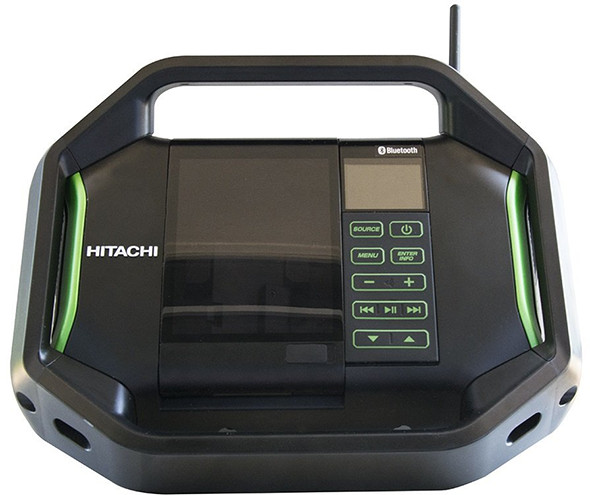 Check out our other recent jobsite radio and speaker coverage here!

Looking at the front panel, there’s a covered media bay on the left, and a control panel on the right. Below the small LCD display are flush-mounted control buttons. It’s worth pointing out that most jobsite radios have large knobs or buttons that are easy to control with gloved hands.

I don’t know how you feel about the buttons, but I think that it’s a fair tradeoff for the radio’s water resistance. 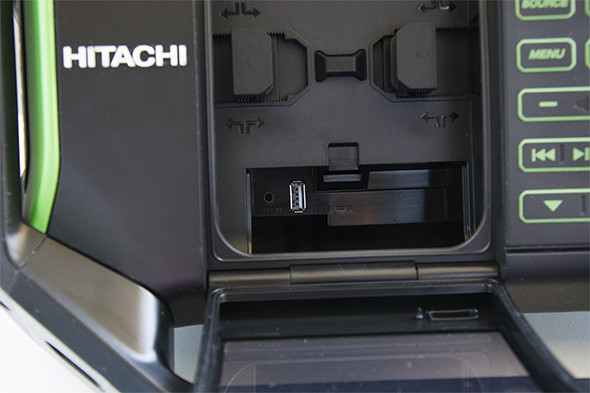 As for inside the covered media bay, you’ll find an adjustable smartphone holder, a USB charging port, and an aux input port. There’s no word as to how wide the smartphone holder can be opened, but I’d think it could hold all but the largest devices.

Some jobsite radios have a covered port where you can protect your smartphone from dust and debris, but I think this might be the first that actually has a smartphone holder. It looks like there’s even room beneath it to fit the slack of a USB charging cable.

Hitachi also designed the new Bluetooth radio with roll cages that look to help protect it from drops and impacts, and they also serve as large carrying handles. At the rear there’s a covered battery compartment and a rubber flap-covered AC adapter power port.

Although not in stock yet, you can order now to get in line for fulfillment. Right now the shipping estimate is 1-2 months.

There are plenty of jobsite radios on the market, more and more Bluetooth radios and speakers, and no shortage of consumer-targeted models as well.

This new Hitachi Bluetooth radio seems to be compact, but without a sacrifice in features. It’s got almost everything I could ask for – a covered media bay with lots of room, a USB charging port, and an audio input jack, and it can be powered by Hitachi 18V Li-ion slide-style batteries (14.4V too), and an AC adapter.

I say almost everything I could ask for because I tend to prefer volume knobs, as opposed to volume up and volume down buttons. A knob is far easier to adjust by feel. But then again, this radio is water resistant. Its IPX4 water resistance standard means it can hold up to splashing water from any direction for a few minutes, but not water jets or immersion.

This seems like an interesting jobsite radio – I just hope it sounds as good as it looks.