ToolGuyd > Power Tools > Cordless > Hitachi Air Pin Nailer Compared to Makita and Ryobi Cordless Pin Nailers
If you buy something through our links, ToolGuyd might earn an affiliate commission. 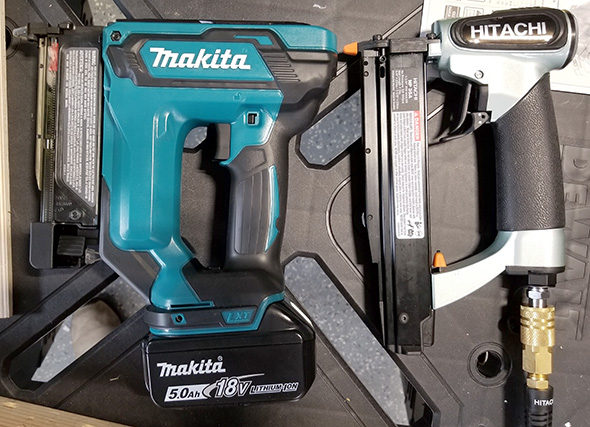 After today’s quick post about the new Hitachi cordless nailer, I took a trip to the workshop to test out some new review samples.

I tested the nailers using 3/4″ Grex pin nails, and also some starter 1″ pin nails included with the Ryobi nailer. 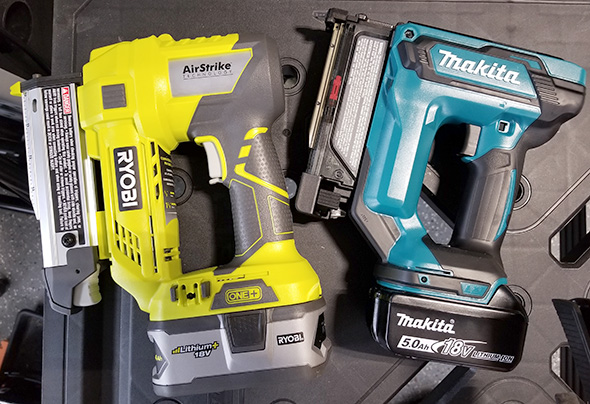 First, the Makita and Ryobi nailers are completely different tools. I’ll be reviewing them individually, shortly, but it seems like a good time to share a few words about their distinctions.

By completely different, I mean that they’re not just DIY vs. Pro, or “value” vs. “premium”; there are big differences in how the nailers operate.

Both had an easy time driving in 3/4″ and 1″ nails, and I’ll be trying 1-3/8″ nails next. Between the two, the Makita has a more slender grip. The Makita has a nose-based safety, while the Ryobi has a safety dual trigger switch system.

The Ryobi failed to fire nails a few times, but I also just opened it today. With a little use, muscle memory will kick in. Either I wasn’t holding the safety lever deep enough, or wasn’t pressing the trigger switch hard enough.

The Ryobi also comes with an edge guide attachment, which I haven’t tried out yet. It’s supposed to make it easier to place nails a fixed distance away from the edge of a panel or other workpiece.

The Hitachi also has a 2-part trigger, and I found that it works a lot better than Ryobi’s. 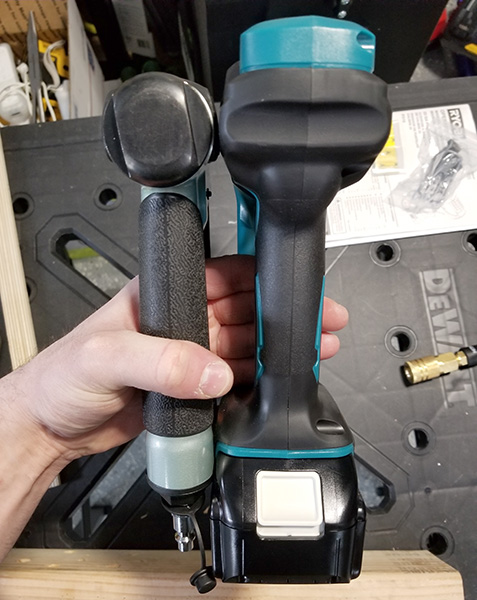 I have a Makita 2.0Ah battery pack that I’ll try with the nailer soon. 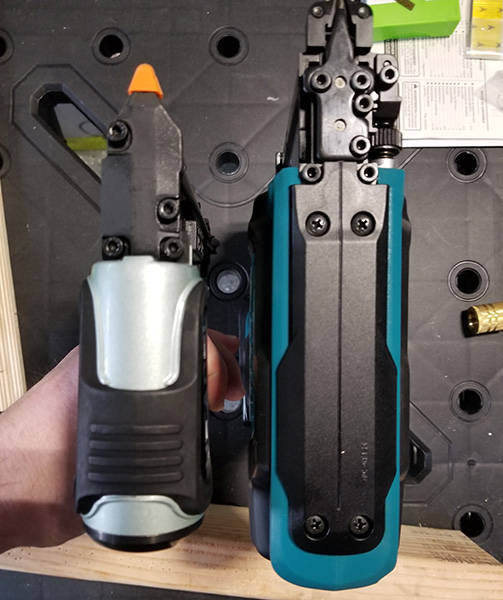 Here you can see the difference from the top. Yes, it’s a big difference. I do want to point out that I’m glad Makita went with this design.

Here’s a second look at the “side view” of both tools. 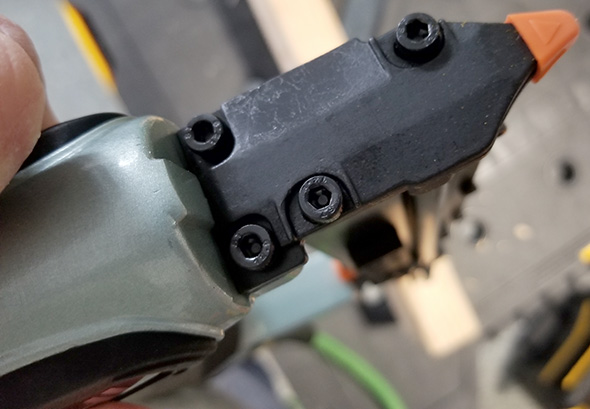 My first test material was a piece of 2×4. The Hitachi nose left square marks around most holes. The wood is soft and the non-marring tip is a little hard. It didn’t leave any marks on plywood, though, and my next test will be hard maple.

The driving depth adjustment on the Hitachi requires loosening and tightening of two hex bolts. It wasn’t very easy to dial in the depth this way, and so I adjusted the air flow by increasingly the pressure slightly. The Dewalt FlexVolt cordless air compressor made things easy.

On that point, I still haven’t made up my mind about the Dewalt compressor’s regulator. I do love the compresspr so far, but the lack of a second gauge throws me off every time I get back to it after using another compressor. I do love its easy to use regulator knob, though. I would not be surprised if we see more cordless air compressor options soon.

So with the Hitachi, the driving depth is easier to control via air pressure than with the nose adjustment, but it could be handy to have both options. 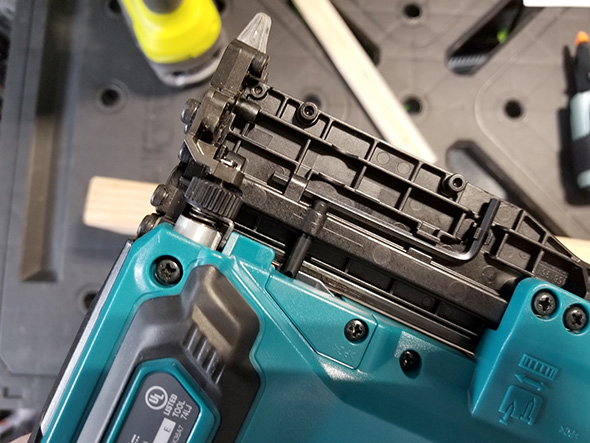 The Makita has an adjustment wheel, making it easier to dial in the exact driving depth you want, and it’s repeatable. 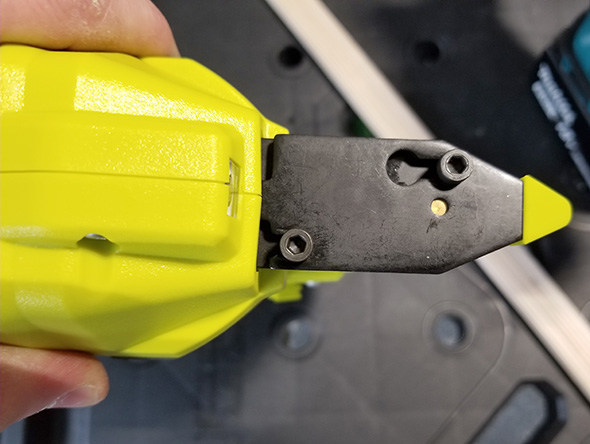 The Ryobi doesn’t have any depth adjustment, and the manual mentions nothing of the sort. The hex fasteners shown here are only to remove the drive guide cover plate for clearing jams. I at first assumed that the tool was adjusted in a similar way as the Hitachi, but was mistaken.

That brings up a question: Do you need depth adjustment on a tool like this? I’m going to need to experiment a bit more.

In theory, I’d like to see depth adjustment on the Ryobi cordless pin nailer. In practice, it doesn’t look like it’ll make a big difference.

All of these nailers have their little quirks. The Hitachi tip leaves marks on soft pine, the Makita jammed up once (it was easy to fix, and I’m not certain it was the nailer’s fault), and the Ryobi slightly over-drove 3/4″ nails.

I have more work to do with all three nailers, but so far I am liking all three designs. I wouldn’t say one is better than the others, they’re all simply different.

So far, though, I don’t have any regrets in going with the Hitachi air nailer.

Since I don’t mind the need for an air hose and compressor, I have no regrets about my Hitachi purchase. But I do also like the appeal of being able to work cord-free. Let’s say you’re working on a big project, or are in a client’s home. There are benefits to not having to drag an air hose around, or to deal with the noise most portable air compressors give off.

The size and weight difference is pretty significant. 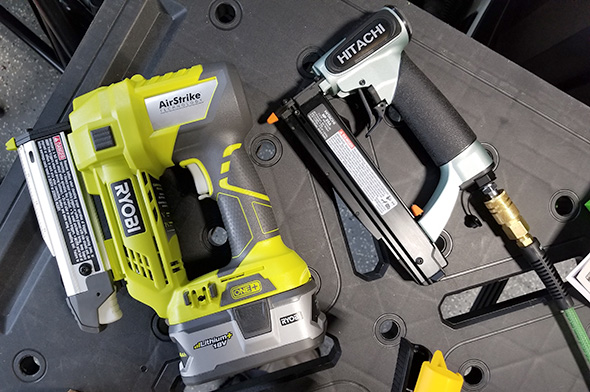 Here are the Hitachi and Ryobi pin nailers compared.

I am also excited to check out the new Hitachi cordless pin nailer. If its tool-less depth adjustment mechanism works as well as Makita’s, or better, it’ll be a winner. It looks like it could be more compact than the Makita, but looks can be deceiving.

While cordless nailers are all somewhat big and bulky compared to air nailers, the size difference seems to be most striking with pin nailers, the smallest nail size you could usually buy.

I have more work to do before I can formally review any of these nailers. If you have any questions or test requests, please let me know and I’ll try my best to answer them!

Which would I buy right now? I’d buy the same Hitachi air pin nailer all over again. If I worked on physically large projects or in clients’ homes, I’d look more closely at Makita and Ryobi cordless models, or the upcoming cordless Hitachi. It can be liberating to work free from cords, hoses, and air compressor noise, if you’re willing to deal with a larger and heavier tool.

Thank you to Home Depot for providing the Makita and Ryobi test samples!