ToolGuyd > Hand Tools > Clamps > Is Home Depot Dumping Bessey Clamps? If So, What Will Take Their Place?
If you buy something through our links, ToolGuyd might earn an affiliate commission. 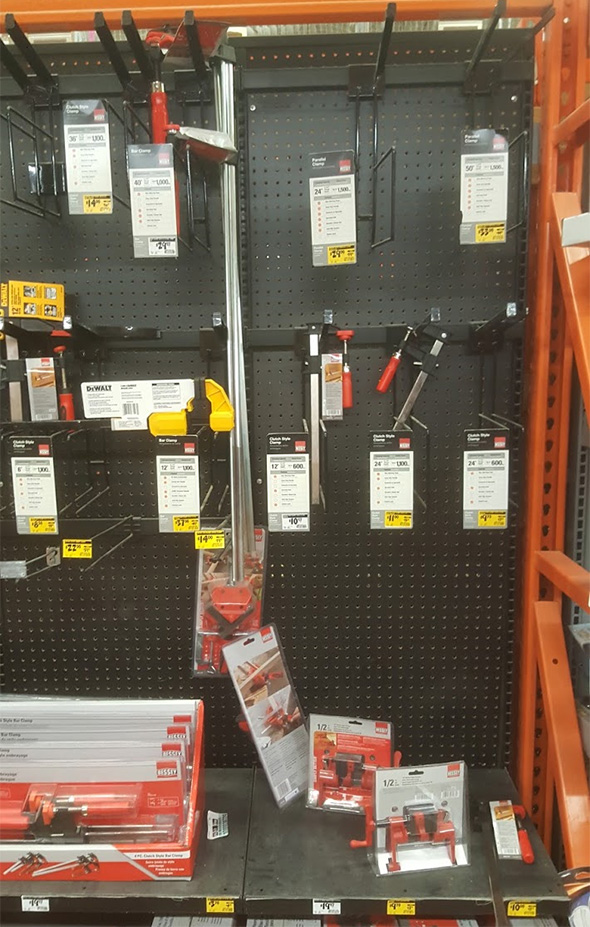 Yesterday, we talked about several new Dewalt clamping products that popped up on Home Depot’s website. Today, let’s talk a little about the Bessey clamps that are leaving the shelves at (some?) Home Depot brick and mortar stores.

When I toured my local Home Depot’s holiday tools gift center, the tool department manager mentioned that they were discounting all of their Bessey clamps and related products.

I didn’t find this to be too surprising. I bought some Bessey clamps from Home Depot in the past, when they had good prices, but I never took these tools to be strong movers.

I remember there being Dewalt clamps on the shelves before, but maybe there are new styles now? 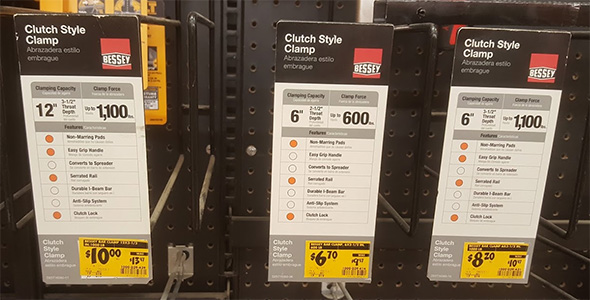 Locally Home Depot put all their Bessey clamps on sale. An employee told me he thought they were bringing in a new brand.

Hmm, so it’s not just my store. If you happen to visit Home Depot in the next few days, would you mind checking out what the clamp section looks like at your store?

New Dewalt clamps… Bessey clamps possibly being given the boot…

It could be a coincidence. Or not.

Dewalt and Milwaukee’s deeper forays into hand tool territory is really turning into an all-out competition for shelf space. Milwaukee has now taken over the level section at Home Depot, with their Empire Level products, and it looks plausible that Dewalt will be taking over much of the clamp section.

Other tool brands will have to up their game.

This topic, where Home Depot is the customer, was the focus of a post a few years ago: Dewalt vs. Milwaukee and Limited Shelf Space at Home Depot. But the same is true now.

If Dewalt clamps will be replacing Bessey ones at Home Depot stores, that will have ramifications for Dewalt and its direct competitors, but also Bessey. That will be something to think about. What happens to tool brands, big or small, if or when they lose shelf space at a major retailer, such as Home Depot, Lowes, or even Sears?

Something else to consider is that Pony Tools, which suspended operations a year and a half ago, is now owned by GreatStar. GreatStar owns Goldblatt Tools, and a whole lot of other brands, ranging from entry-level to pro-grade. They also manufacture tools for private label brands, such as Kobalt.

Perhaps Pony clamps will be coming back to Home Depot shelves?

Whatever is bound to happen, it’ll take some time before we know what’s what.