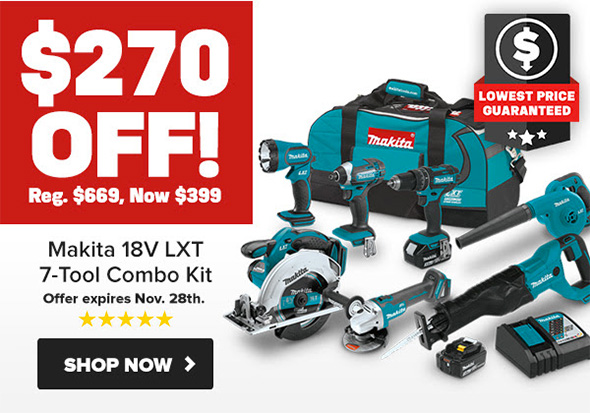 Here’s what it comes with:

There are a lot of Makita 18V cordless power tool special buys this time of year. Brushless combo kits, bonus tool combo kits, small kits, big kits. So how does this one match up?

First, let’s take off $100 in value for the two 3Ah batteries, because that’s the typical “special buy” price for a battery 2-pack. So that’s $299 in value for 7 tools. Let’s ignore the light for a moment too, because while a Xenon bulb worklight can be useful, it probably won’t be a workhorse. So that’s $299 of value for core tools and some extras, with one being a brushless grinder that typically retails for $139 by itself.

To me, this looks like a good starter kit, and one that allows for easy expansion into the Makita 18V LXT ecosystem. You can buy additional higher capacity batteries if needed, or any bare tools.

I found myself wondering if it would have been better for Makita to bundle this kit with 4Ah battery packs and a standard charger instead. But, that would have provided 33% more charge capacity, while the charging time (from the last specs I saw) would have taken roughly 2X as long, if not longer.

There are other Makita deals this season, and there might be more even. This deal, in my opinion, is a great “best bang for the buck” option.

At the time of this posting, I cannot find the same deal elsewhere; the other retailers I checked have it at $499 and up.

In comparison, look at the Makita XT506S bundle that looks to be a seasonal special at Amazon. That’s a 5-tool bundle for $299. Spending the extra $100 on this XT706 kit gives you the rapid charger vs. a “standard” one, and two additional tools – a circular saw and the brushless grinder.

There are also some Makita brushless power tool combo kit deals, and those are great buys too.