ToolGuyd > Hand Tools > Pliers > How to Use Split Ring Pliers
If you buy something through our links, ToolGuyd might earn an affiliate commission. 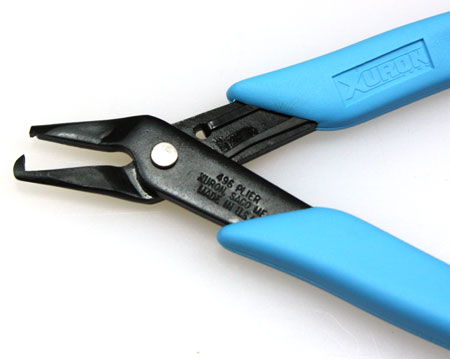 Split rings, most commonly found on keychains, are typically used in craft projects, and in fishing lures and tackle. Most of the time, a lone split ring will be relatively easy to open – all you need is a finger nail or a makeshift prying tool, and the ring is open in a flash. However, what do you do if the split ring is very large? Very strong? The first of many? Let’s talk about split ring pliers.

What are split ring pliers? 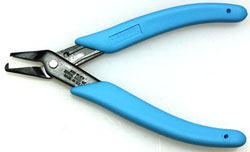 As shown, split ring pliers typically look like stubby long nose or chain nose pliers, and feature a pointed jaw hooked over towards the opposite jaw.

How do I use split ring pliers? 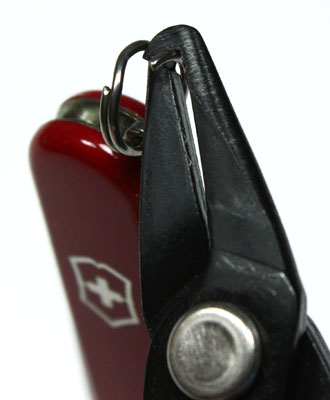 Split ring pliers are very easy to use – simply open the pliers, place the ring against the straight jaw, and then close the pliers. The hooked perpendicular jaw will then wedge the split ring open. The pliers can be removed once the open end of the ring is slid through its intended attachment point.

To prevent a delicate object from being scraped or marred, a second pair of pliers can be used to help keep the split ring open while it is being attached. Once the split ring is attached, the pliers are detached to allow the ring to spring closed. 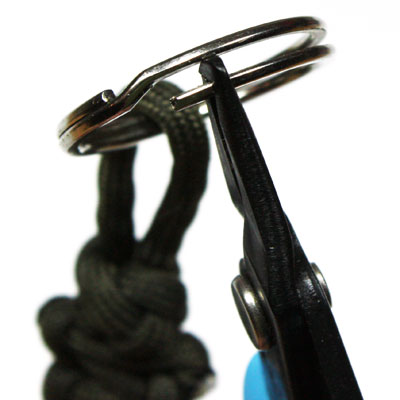 Do I need more than one size of split ring pliers?

This depends on the size range of split rings you need to open. Personally, I use a one-size-fits-most model, and have never found a split ring that it couldn’t open quickly and easily.

Is there a particular model that you recommend?

The plier shown in this brief how-to is a Xuron split ring plier, model # 496. Other brands’ pliers may suit your needs, but we’re huge Xuron fans, and for good reason – their pliers are solidly built and of high quality, are comfortable to use, made in the USA, and the prices are right.

Xuron’s split ring pliers also have several features that make them comfortable and easy to use, most notably: soft ergonomic handles, a groove in the straight jaw to help grip rings, and a spring return that most people don’t appreciate until they try to use pliers that don’t have it.

Where can I buy a pair of split ring pliers?

Split ring pliers can usually be found at any store that offers a wide selection of split rings. Your best bet would be to check out craft or beading stores, sporting goods or fishing tackle shops, or any number of online vendors. A link to the Xuron pliers on Amazon can be found below (that’s where we bought ours from).