ToolGuyd > Power Tools > Saws > I Have No Idea How to Review This $1,000 Mafell Circular Saw
If you buy something through our links, ToolGuyd might earn an affiliate commission. 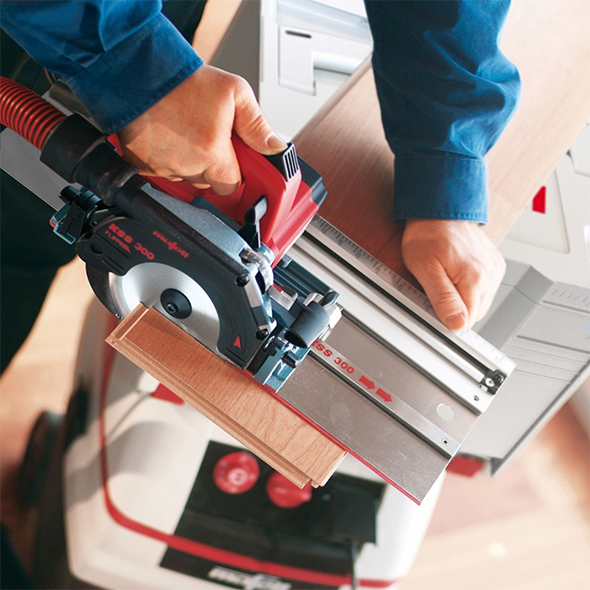 When our friends at ToolNut asked if I wanted to review a Mafell circular saw, I was hesitant, but open-minded.

I own and have reviewed Festool tools before, which typically have a learning curve, thick manuals, and “tips and tricks” types of add-on booklets you can download.

A kitchen remodel, workshop remodel, finding a new balance after my daughter was born, and suffering almost constant colds and upper respiratory setbacks all Fall had delayed my test schedule quite a bit.

I had cracked open the Mafell Systainer and thought I was ready to go.

But first, thanks to our friends at ToolNut for the loaner! I’ve ordered from them in the past, and they’ve proven to be a great tool dealer. Not everything has been perfect, but I was always satisfied with the way they handled my orders and business. I wouldn’t hesitate to order from them again, and can recommend them.

They recently started carrying a selection of Mafell tools and accessories. Here’s a link to the various Mafell circular saws they carry, and the KSS 300 they sent over for review consideration:

Mafell is Not Festool

I had made the mistake of assuming that Mafell tools would be just like Festool’s. Well, they’re not. There’s a learning curve, and they’re not going to hold your hand through it in the same way.

The KSS 300 was relatively easy to figure out, but the manual could stand to be better.

Pass the tool along to someone without the manual, and they’ll likely be lost.

Mafell’s knobs could stand to be color coded. I remember it taking me a few minutes to figure out where the depth adjustment lock was.

Once my “this saw is so small!” shock had worn off, I quickly appreciated the finesse of the saw’s design and engineering.

I can’t tell you if it’s worth a full grand, but I can tell you that Mafell seems to have engineered the KSS 300 circular saw system without holding back.

This is what you get when tool quality is valued over price point.

They could probably do things cheaper, but is it really worth sacrificing anything for slight cost savings? Realistically, when you’re talking about a $1039 tool, it’ll take a lot of cost cutting to attract much more potential buyers.

The short guide rail is awesome. Once I figured out how to disengage the saw, I immediately fell in love.

Shortly after I received the saw, I drafted an email to our ToolNut contacts. I thought the guide rail was coming in a separate shipment. Nope! Both the short rigid guide rail and long flexible guide rail fit into the tool box.

Up next (soon I hope) is a review of Festool’s portable circular saw system, which works in the same way as the KSS 300, and I believe its bigger brothers the KSS 400 and MT 55 CC.

The KSS 300 also comes with an edge guide and 55″ Flexi-Guide rail that folds up for easy transport and storage.

I love the small guide rail, the Flexi-Guide rail is just okay. Yes, it fits inside the same toolbox for easier carrying, but it also works differently than regular track saws. The flexible guide rail has raised nibs that a notch in the saw’s plate ride along.

The KSS 300 seems to be a very nice tool, but for special uses. It can cut dimensional lumber – barely, and is said to be great at cutting trim, flooring – stuff like that.

It was described to me as being capable of handling many of the tasks a miter saw would be used for.

That brings me back to what’s been stumping me.

How the heck do I review this saw? I have no idea!

It’s an excellent saw, no doubt about that. But who to recommend it to? For what sort of tasks?

I guess it’s a nice compact plunge cutting tracksaw for those who want to fit everything in a single Systainer tool box.

You can handle larger cuts with the flexible guide rail, but my appreciation for the rigid mini guide rail has me wishing I had instead received the KSS 400 to review, with its 15-3/4″ cross cutting capacity.

The saw needs to go back to ToolNut pronto, so I had better figure things out quick!

Plenty of reviewers will describe this saw as the best thing since sliced bread. But I’m just not there yet. I can’t find a good context to recommend it, at least not yet. That’s mostly the point of this post – to ask for your help in understanding this tool.

It’s not a tool I would buy, which is true for lots of tools, but in this case it really hampers my understanding of it.

I had never considered buying a Mafell tool, mainly because there was slim availability in the USA, and because it seemed the specialized in the same types of tools as Festool, and I’ve been happy with my Festool purchases. What could be better? (Aside from imperial depth settings, which were recently implemented.)

Is great quality, performance, and user experience enough to balance the $1039 price tag? I’m just not seeing this as the king of compact cross cutting tools, despite its many positives.