ToolGuyd > Adhesives, Sealants, & Lubes > Insta-Set Super Glue Accelerator, from Bob Smith Industries
If you buy something through our links, ToolGuyd might earn an affiliate commission. 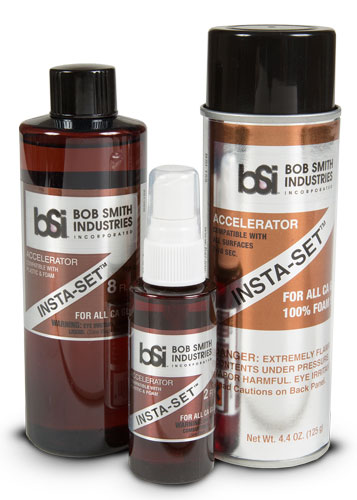 Cyanoacrylate (CA), or super glue as it’s commonly called, sets pretty fast, but sometimes pretty fast just isn’t fast enough. When you really need super glue to bond *right now*, you can use what’s called an accelerator. There a few brands of CA glue accelerators on the market, but the one I chose last time I needed it was Insta-Set, from Bob Smith Industries (bSi).

bSi does warn that you should store the accelerator and the CA glue separately. It’s not hard to understand why – if the vapors interact over time you might end up with two clogged bottles. 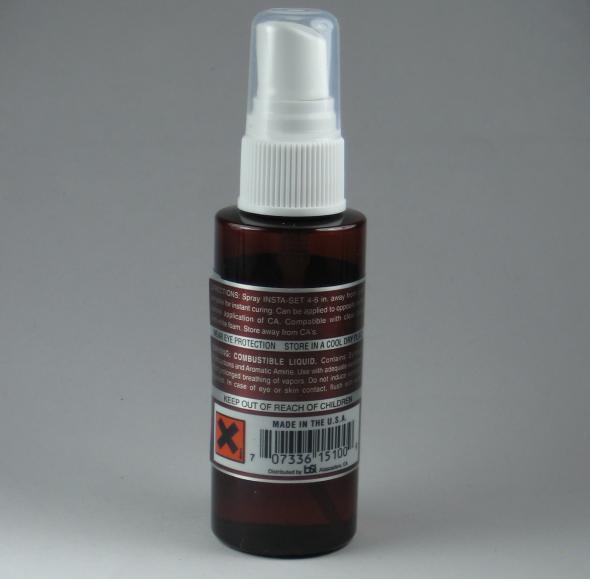 Insta-Set is made in the USA, it says so right on the bottle, but I don’t think that’s very special as I couldn’t find a bottle of glue that I owned that wasn’t made here.

The first thing I liked about Insta-Set was that there is an option for a spray bottle applicator, rather than just the aerosol can. In my experience, using a spray bottle means I can control the application accuracy and volume better than with a spray can.

The second thing I liked was that it didn’t stink. While I haven’t minded the smell of some other brands of CA accelerator, it’s a common complaint. The Insta-Set actually has a rather pleasant smell; it’s formulated with a strawberry scent. Obviously you shouldn’t go around intentionally sniffing or smelling it, but if you catch an accidental whiff, it’s not distracting.

The last thing I liked was that is was cheap. A 2 oz. bottle only cost me $6 on Amazon. It shipped free from Routerbitworld, without the need for Prime. You can also purchase the larger 8 oz bottle for about $10 with free shipping. The larger bottle doesn’t come with a spray tip though. If you’d rather have a spray can, the 5.9 oz. can will run you $13.28 shipped.

Safety Warning: CA glue often carries its own safety warnings, but there are a few things to keep in mind about bSi’s Insta-Set, which might or might not apply to other CA glue accelerator products. Here’s the Safety Data Sheet (PDF). This stuff is flammable, and described as an aspiration toxicant. Avoid breathing vapors or mist, wash hands after handling, use outdoors or in a well-ventilated area, wear protective gloves, eye protection, and face protection. Read safety sheet before use.

There’s one other thing I want to warn you about. The 2 oz spray bottle I ordered had leaked during shipping, but luckily it was sealed in not one but two plastic bags. It’s wasn’t a big deal though, I just carefully cut the tops off the bags, pulled out the spray bottle, unscrewed the spray cap, and poured the leaked accelerator back into the bottle.

Either they wrapped it expecting it to leak, or they did so out of an abundance of caution. Fluid products are sometimes (but not often enough) wrapped or double-wrapped when shipped, especially when you buy from industrial suppliers. This way, if a container is damaged during shipping, it’ll be contained instead of contaminating everything else in the same box. Double-sealing could potentially be required due to the vapor hazards outlined in the safety sheet.