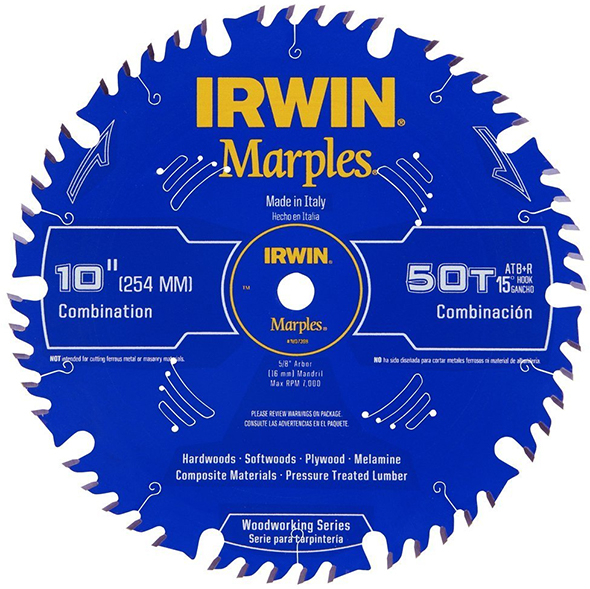 I am a big fan of Freud Diablo’s D1050X 10″ combination table and miter saw blade, which sells for under $35 via Amazon. I wrote about that blade a few months ago, in my “Best Miter Saw Blade” post.

About a week ago I pulled a brand new Irwin Marples combination saw blade out of the bottom of a box, model 1807368. I believe it was a review sample, and that it had somehow inadvertently gotten itself buried for a few years.

I had some table saw cuts to make, and while I’ve been using a Dewalt saw for my current cabinet build project (I’ve been making the second set of drawers), I also have a SawStop portable table saw test sample that’s been itching to cut some wood.

I only have one of those Diablo blades, and it’s loaded in the Dewalt saw, and so I found this Irwin saw blade just in time.

It’s a 50-tooth blade with alternate tooth bevel carbide teeth, and raker teeth. It’s said to excel at cutting all kinds of materials, including plywood, and is said to be suitable for table saw and miter saw use.

Whoa. The blade performed quite admirably, leaving clean and smooth edges. And the SawStop? It was smooth-cutting and powerful. It felt smoother than the Dewalt saw, and the guard’s anti-kickback pawls didn’t score the wood in the same way.

It’s not relevant to the discussion of the blade, but I found the SawStop to be a LOT quicker and easier to set up than any other portable table saw I’ve tested, ever. I had to set it up and take it down outside several times because the weather was playing tricks on me.

I’m the type of user that uses full guarding on through-cuts, and it was a pleasure to have the fence and guard on and off stowed away in seconds.

See Also: Setting up a SawStop Jobsite Table Saw – How it Went

I’m going to need to swap the blades back and forth from saw to saw, to try and see if I can tell any difference between the Diablo and Irwin blades.

But so far, I’m really liking the Irwin blade. More than the Diablo combination blade? It’s hard to say.

This Irwin blade costs a few dollars more. If I had trouble getting an immediate Diablo replacement, I’d probably buy this one without a second thought. Maybe I’ll be more open-minded about blade selection in the future. I’m a Freud fan, but this impression has me willing to consider other Irwin Marples blades in the future.

That’s as close to a recommendation as I can stand by right now. If asked outright, “do you recommend this blade,” I’d offer a simple answer – “yes.” Not “YES!!,” at least not yet, but a “yes” nevertheless. It seems to be a great general purpose 10″ woodworking saw blade.

It will also be interesting to see what happens to the Irwin Marples brand, now that Stanley Black & Decker owns it.

As of the time of this posting, this blade is made in Italy. (Perhaps this design is made for Irwin by Freud, which also manufactures some blades in Italy.)

I have not yet tried this blade on a miter saw, but will try to report back if anything notable happens.

Thank you to Irwin for providing this review sample unconditionally.